The Escapists: The Walking Dead Review 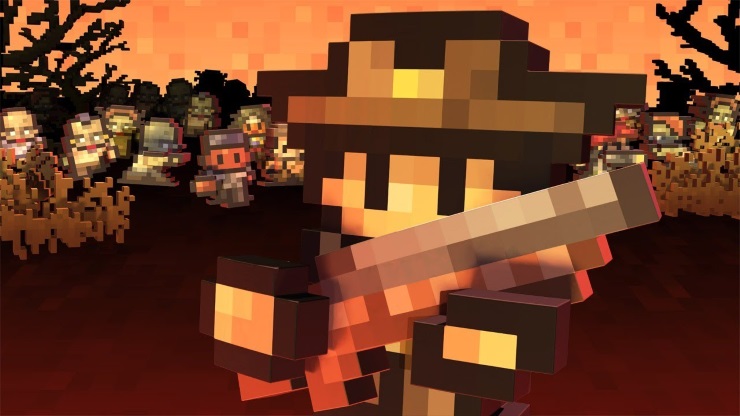 As I write this I am stuck on a puzzle. I’ve been stuck for days (or, at least, in-game days). I am making incremental progress: a new route discovered; another shotgun with two ammo crates; more crafting materials which will allow me to upgrade my flimsy tools; another room cleared of walkers – but I just can’t seem to find the final piece of the puzzle so that my motley crew and I can escape from this particular hell-hole. A message flashes up: it’s the last head count of the day. I’d better get back, because I don’t want that threat level to increase. I will just have to try opening the air vent tomorrow to see if I can finally get in to the room that has had me barred for the past ten days. For now, I’ll rest, save my progress and plan the next step.

It seems every moment of The Escapists: The Walking Dead is like this: intricate layers of puzzles to solve which lead you to new areas, with new obstacles to overcome. The Walking Dead tie-in to the enormously successful indie Prison Breakout hit, The Escapists, works wonderfully with the mechanics of the original game. Loosely following the comic book plot lines, The Escapists: The Walking Dead sees you play the main character, Rick Grimes, in different locations from the world including the Memorial Hospital where Grimes first wakes up after being shot pre-Zombie days, to the Greene Farm where we meet Hershel and Maggie, to the prison, and on to Woodbury and even Alexandria. In total there are five different areas with increasing difficulty to plot and puzzle and fight your way out of. The Escapists: The Walking Dead follows the same pattern as its predecessor, in that you are tasked with escaping each area, with the difficulty and complexity of the puzzles increasing as you progress. As in the original, you’re still tasked with busy work, attending head count twice per day, sitting down to meals, and performing communal work tasks. By completing these consistently throughout the day you will help to ensure that your compound is free from the zombies that inhabit the world outside, keep the threat level to a minimum, and keep your band of survivors safe for another day.

Outside of attending these set times you are free to roam and explore as much as you please, however this is always seemingly curtailed with another call to action just as you finally manage to break through that wall that has been keeping you at bay. Exploration is essential, as you’ll need to locate particular components to build tools to assist you with solving the next puzzle and ultimately escaping the area. You can also take on tasks from the other survivors to amass coin, which in turn can be used on vendors that appear outside of your safe compound at night time, making the trek very much a gamble between potential risk versus reward.

The Escapists: The Walking Dead is pure sandbox entertainment. How you approach each puzzle is entirely up to you. You can push straight for the main objective or take your time to explore every nook and cranny within the level to discover all its secrets. Doing so will take time and you will need to ensure that you have the correct tools to be able to do so. Tools are crafted with the various component pieces you discover in the levels. Crafting recipes are not readily available; you can discover them through exploring the environment or by accidentally creating them yourself through a tiring process of trial and error. I say tiring as not all recipes are entirely logical. If you have ever played a zombie game in the past you will know that combining a baseball bat with some nails is a fairly standard melee weapon, and you can recreate that in The Escapists: The Walking Dead, but creating a tool to cut through wires appears to be a bizarre combination of a file and duct tape. To further compound things there are several tiers of crafting. For example: combine a piece of timber with a file and you will create a makeshift handle which is a base component for pickaxes and shovels. However, without a useful crafting interface to see recipes and the components you already have it can become a tedious process of trekking backwards and forwards between your lockers to collect the items you require, which in turn is interrupted with your roll calls or meal times. It’s time-consuming stuff and is occasionally obtuse enough to put some people off.

That being said, The Escapists: The Walking Dead is very much a game that will appeal to a certain type of player, and one that rewards meticulous planning and patience: gathering the materials you need to create the tools to progress towards your end goal inch by inch, locating the keys required to unlock areas previously closed off to you and ultimately bringing your plan together to achieve the end goal. There are mild RPG elements in that you can work out to increase strength and stamina, meaning you have more health to take on zombie attacks, or improved speed so you can run away from them if you get overwhelmed. You even need to increase your intelligence through reading or playing games to access higher tier crafting abilities. It’s an additional layer of depth to an already deep game. Graphically, The Escapists: The Walking Dead follows the same aesthetic as the previous game with its charming 8-bit, retro, top-down pixel art. Alongside that is a great little soundtrack, a mixture of bouncy loops and scratchy low strings when things get a bit tense.

Aside from there being far too many instances of “the” in the title, The Escapists: The Walking Dead is a fantastic, complex little game with lots of puzzles and secrets to find. It is entirely possible to finish a level without uncovering half of what the area has to offer, and as such there’s great replay value for those who like to ensure every inch has been explored. There are even leaderboards for the quickest escape and the most points scored in the level for which I am sure we will start to see speed runs appearing. There may be a little too much micro-management for some players, but for those who revel in such things it really is worth it.

Some obtuse puzzles.
The scheduled tasks can feel like busy work.
Lots of micro-management.

A great tie-in and a solid game in its own right, The Escapists: The Walking Dead is an enjoyable and surprisingly deep head-scratcher.

You may also like
Team 17The Escapists: The Walking DeadPC