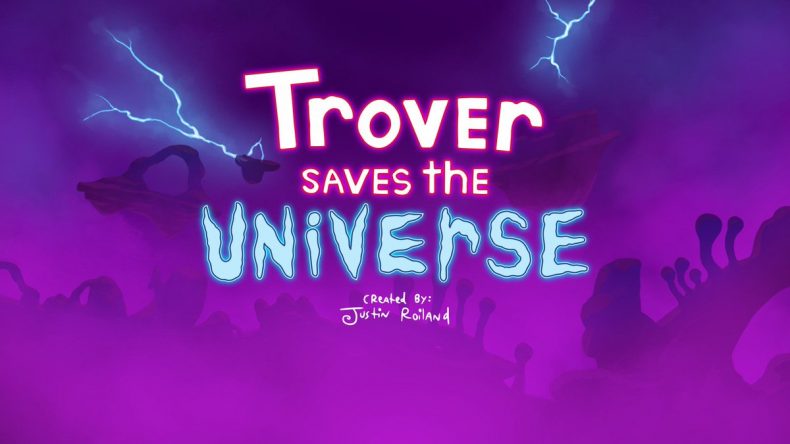 With certain creators, you know whether you’ll take some enjoyment out of their projects even if it’s not some of their best work. In this case, Justin Roiland – co-creator and voice actor for Rick and Morty – brings us Trover Saves the Universe. It doesn’t compare to the brilliance of his buddy sci-fi animation, but it’s still decent enough to enjoy its 5-hour campaign.

The basic premise is ridiculous, but very much in line with Roiland’s brand of humour. You play as a Chairopian – a dude that sits in an armchair all day – and must control Trover to help get your two dogs back, now shoved in the eye sockets of a big beaked alien called Glorkon. The game feels a little like Astro Bot in the sense that you use your head to look around the world and guide the protagonist around the levels. Whilst it’s not as good as its comparison, there’re plenty of smart ideas where collectables are only found if you look around for them. Pretty early on, you’re given the option to move your arm chair higher to survey any potential threats for Trover, as well as potential hidden items, and this helps you a lot. Throughout the majority of the game the mechanics remain the same. You can use a lightsaber-type weapon to dispatch of the enemies, and for a long time it becomes repetitive and rarely any fun. There’s more interactivity between you and Trover as the game opens up, and it becomes a little more challenging, however, its the sense of humour that makes this game worth playing.

It’s a very basic game, where you hack-and-slash your way through the different worlds. When you begin a puzzle in the first proper world, Trover just takes the piss out of it and instead breaks down the door, exclaiming that trying to solve it will take much longer. It’s very meta, and shows that Roiland has a great knowledge of video games. Obviously, if you do watch Rick and Morty you’d know that anyway, such as the episode where Morty plays a VR game where he lives an entire lifetime. Of course, the game can be played in VR, but you’re more likely to enjoy it using the headset as the majority of Trover Saves the Universe is made for VR. You won’t be able to observe your surroundings as easily, and in general the game is much easier to enjoy with the mechanics of the PS VR. Due to its simplistic approach to gameplay, you might get fairly bored within an hour or so, especially if you’re not a fan of Roiland’s work. If you do have a penchant for the vulgar and witty jokes often seen in Rick and Morty, then this is definitely something you’ll want to play. It’s a parody of video games, fully aware of itself, and enjoys breaking the forth wall whenever it gets a chance.

It’s also quite a colourful little game, with visuals that are rather good for a PS VR title. It doesn’t have the same kind of detail as Astro Bot, but it’s still pretty to look at. Some of the character animations are weird and wonderful, and the whole concept of using weird blobs as eyes is just one of the bizarre ideas that works to bring a good deal of laughter to you.

Trover Saves the Universe is a funny, laugh-out-loud action adventure that would be completely mediocre if it wasn’t for Justin Roiland’s unique brand of humour. Despite the rather dull gameplay, the NPCs are a joy to listen to, and the other random characters that provide your quests can be completely ridiculous, but it never stops you from having a decent amount of fun playing.

Mediocre gameplay
Becomes repetitive early on
Doesn't do anything new

Trover Saves the Universe is a very funny adventure game that doesn't offer the same brand of gameplay as Astro Bot Rescue Mission, but Justin Roiland's humour makes it much more appealing.