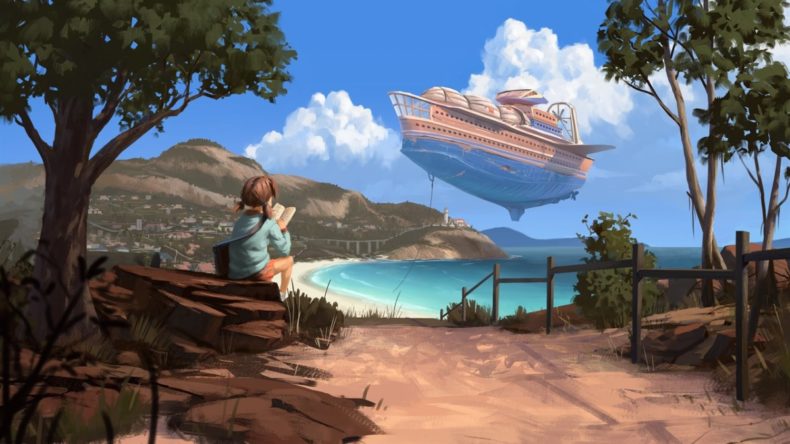 There’s a certain stigma attached to the older generation of being grumpy and out of touch. Yelling at kids who’ve kicked their football over the hedge, complaining to Irene or Alfred about how their post turned up too late, or telling overtly long and uncompelling tales about their trip to the supermarket. The truth of it is, they’ve endured life for long enough that their more than entitled to have grievances with the little things they’ve have to endure in their lives. Wayward Strand celebrates old age, highlights its vulnerability, and reminds us of how pensioners are just as important as everyone else.

It’s a theme that’s been long unexplored in video games. Fundamental worries of reaching a ripe old age, closer to leaving this mortal coil and reflecting on past mistakes, regretting actions that could have led to scenarios never experienced, and generally seeing the world for what it is, rather than what it could be. Instead of blind optimism, the people in Wayward Strand are well-versed in the harsh realities of life, living on an airship and living out their final years with little interaction from others, left to look back on their lives as opposed to looking forward. 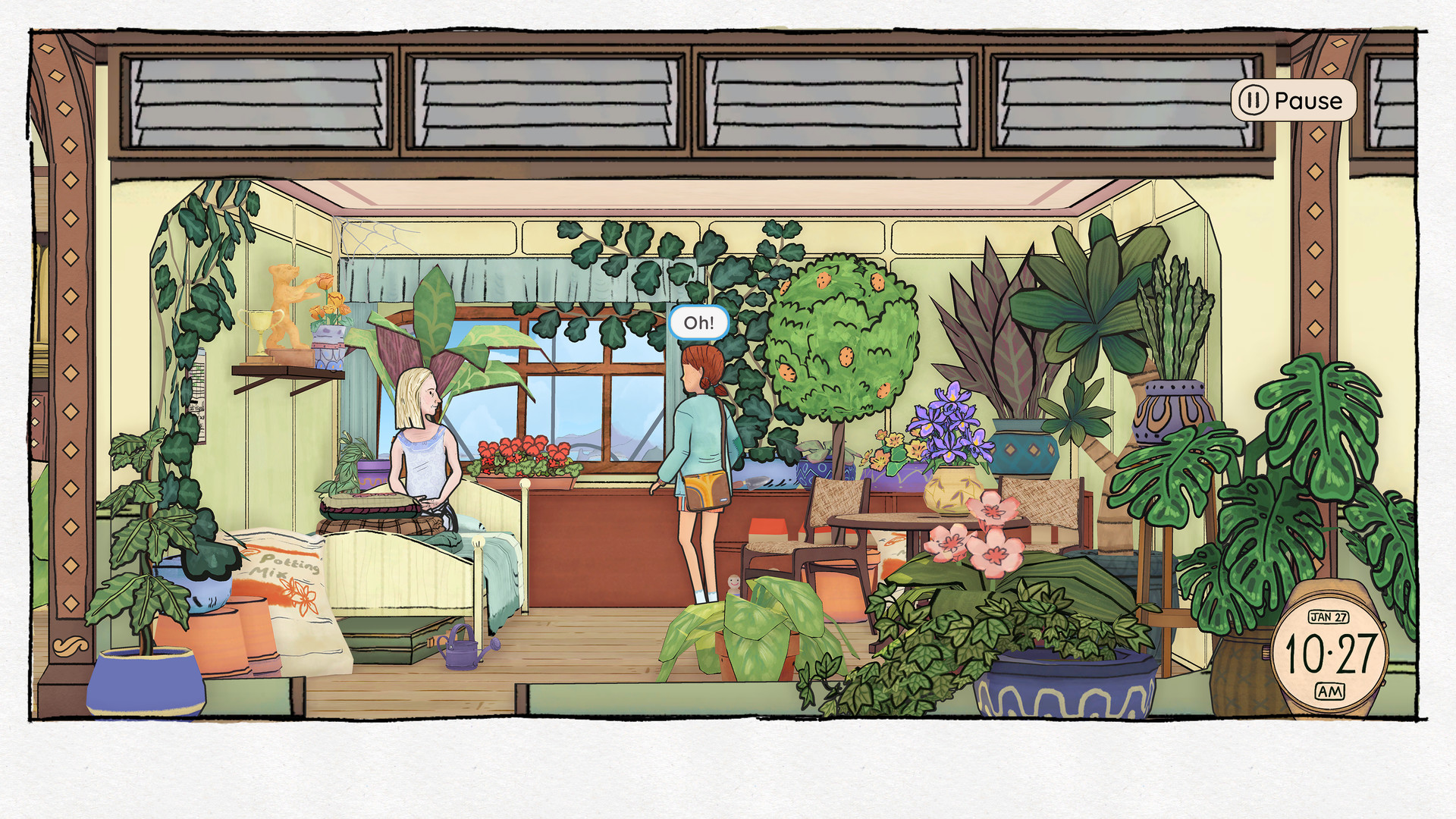 We take life for granted. Going from day to day and not thinking about how precious time is until it’s too late. It’s something that gets highlighted a lot in Wayward Strand, but done so in a beautiful way that helps to remind you of the importance of what we do in the time we have, not taking for granted of how precious our lives truly are. I don’t want to be too melancholic here, but it’s something I constantly felt during my time with ghost pattern’s surprisingly poignant heartfelt story.

Thanks to a superbly voiced cast of actors, each interaction you have with the elderly residents carries with it a weight of importance and significance. Not necessarily because of its context, but the way it leaves an impression on you. A chat with Ida Vaughn (voiced by Anne Charleston AKA Madge Bishop from Neighbours) might remind you of one of your grandparents and how their sweetness and warmth would make you feel, or the grumpy and brash nature of Dr Margot Bouchard, once in charge of treating certain patients on the airship, now plagued with a life-threating illness. 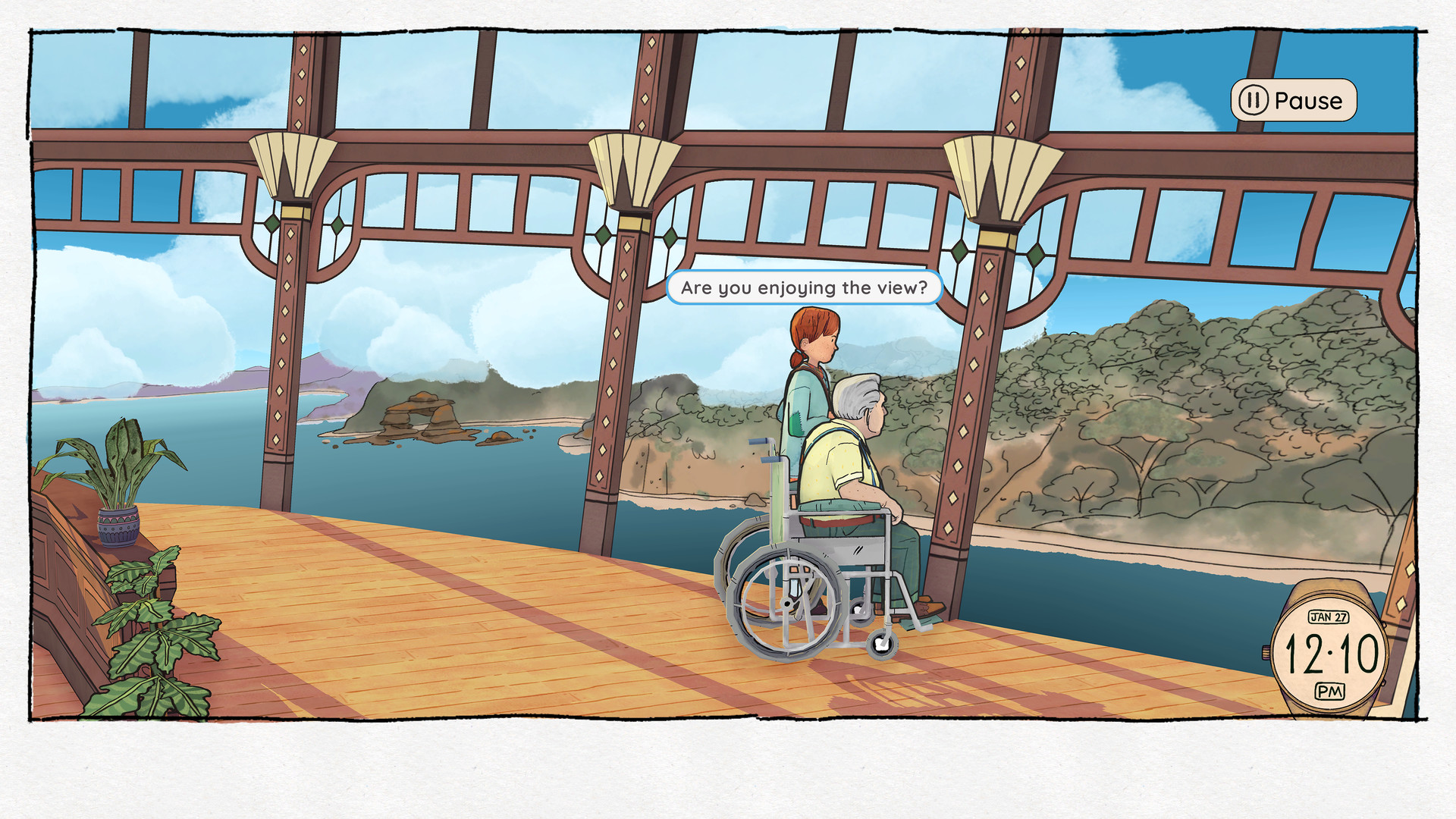 As 14-year old Casey Beaumaris, you’ve been brought to this floating airship doubling up as a care home for its elderly patients by your mum at the tail-end of the summer holidays. She’s overworked and understaffed, worrying that some of those living there aren’t getting the attention they need, so asks you to go and spend time with them. Wayward Strand takes place over three days, and in that time you can talk to who you wish, choose to spend hours or minutes with them, with the freedom to choose exactly how you spend your time there. To uncover everyone’s stories and histories, you’ll need to play through multiple times, but there’s also no shame in playing it once and letting the experience stick with you.

You see, whatever you find out and whoever you warm to the most, it feels wholly authentic just as in life. Every single one of the patients goes about their day regardless of whether you spend time with them or not. The time passes by on your watch in the bottom right corner of the screen, and, if you haven’t learned enough about someone when it’s time to leave, you won’t get another chance unless you decide to play through all over again. It’s a reminder of how precious time is, and a subtle detail that bleeds into the philosophical framework of how ghost pattern has crafted Wayward Strand’s story.

When you do choose to spend your time with someone, you can choose to ask them questions about something that’s piqued your interest in their room, listen to them waffle on about a crossword puzzle or something else that’s clearly important to them, or simply sit there to keep them company as time passes, whether it reaps further conversation or not. I became particularly invested in Tomi Hummel’s little bubble; a woman who doesn’t talk, and a room filled with lush greenery and various trophies on top of shelves that overlook her bed. 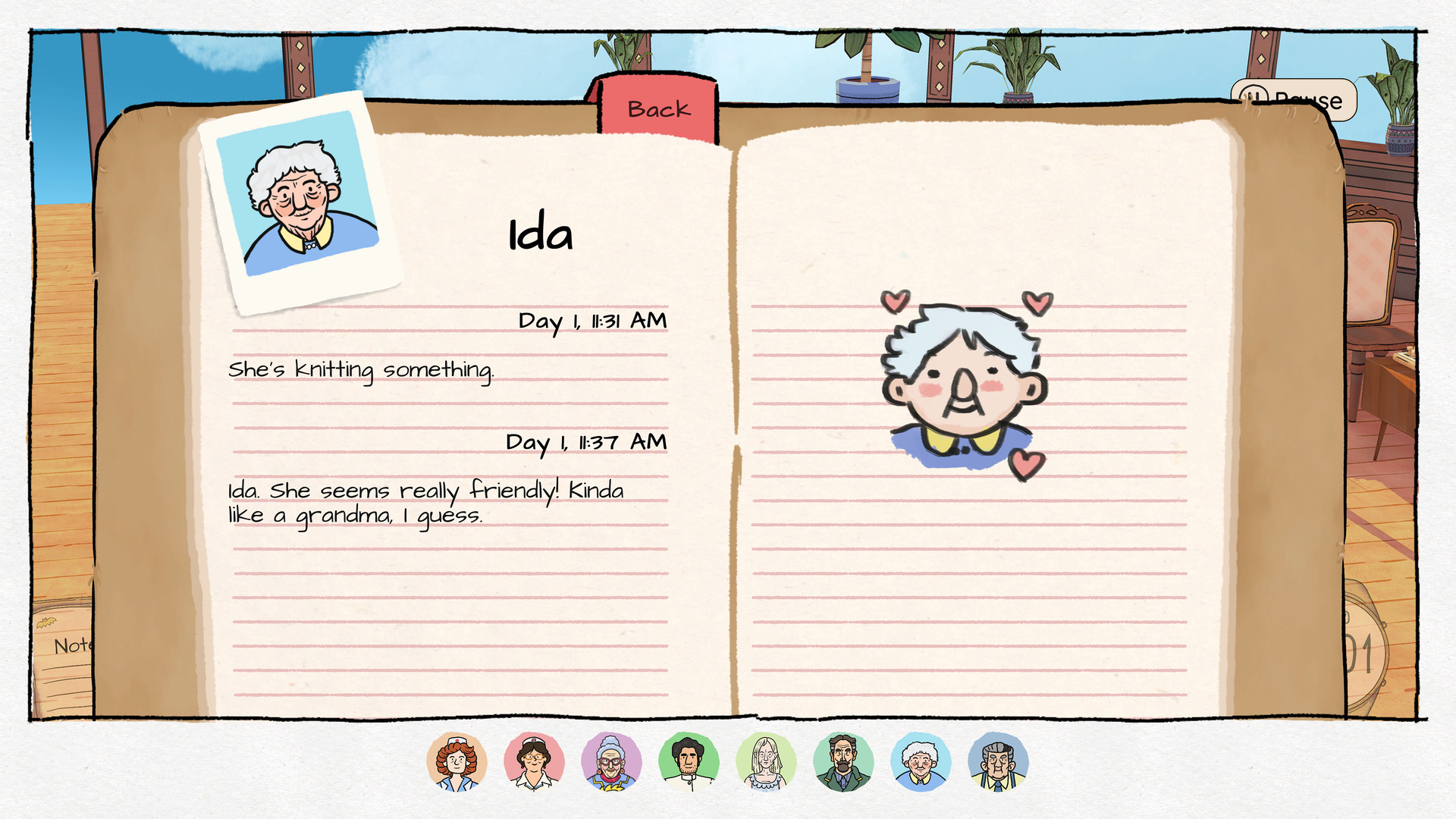 As you do find out more information about everyone, you’re notebook fills up with details, helping to paint a picture of everyone and help remind you about little details you might have missed. Other than getting to know people, there’s little else to do. That’s not a bad thing, but Wayward Strand won’t appeal to everyone. It’s filled with ground-level drama, not the kind seen in more intense and overly frantic tales set in a post-apocalyptic or fantasy world, but its heart is where you’ll find a powerful connection with, and if you stick with it, there’s going to be something there for you to either relate to or be moved by.

Wayward Strand is a relatively short game per playthrough, but the relationships you build and the lives of those living on the airship have a habit of sticking with you long after playing. The voice acting is excellent, and the art style is stunning, eliciting memories of those Chip and Kipper books you read as a child and helping to subconsciously add to the nostalgia and familiarity you feel. Some of the movement or scene transitions are slower than I would have liked, but not enough to leave any lasting frustrations. If anything, it reminds you that time might be cruel, but it is one of the most important gifts we have.

Wayward Strand provides a poignant reminder that life is fragile, but within its delicate boundaries, we have a gift unlike anything else. The residents are all interesting thanks to great writing and a solid cast, and when you're done, you'll be left feeling a deep sense of respect for the elderly.