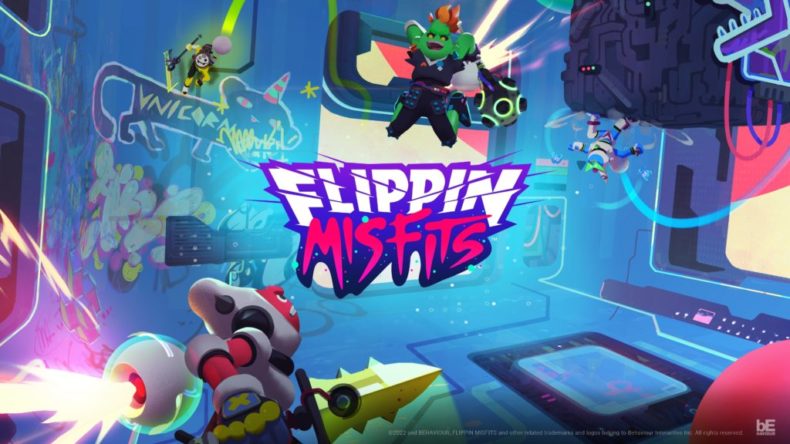 As a massive fan of Dead by Daylight, I’ve been well acquainted with its developer Behaviour Interactive for longer than I’ve been writing about video games. After pumping thousands of hours into my favourite murder simulator, our relationship has had its ups and downs. From the highs of releasing my new favourite killer to the lows of ruining my best perk loadout, they’ve firmly cemented themselves as a part of my life. When I got to see some of their new games at their Behaviour Beyond showcase I was immediately drawn to Flippin Misfits, and now it’s ready to be played by everyone.

The titular Misfits are a ragtag bunch who go about life with reckless abandon. With nary a care for their health and wellbeing, they decide to move their space station between three black holes and then set to repeatedly murdering each other in a zero gravity extravaganza. You’ve got to respect a group who value entertainment enough to put in all that effort.

Each round of Flippin Misfits is three minutes long, and the aim of the game is to get as many kills as possible in that time. You do this by flipping gravity around to get close enough to one of your enemies then whacking them with your sword to kill them instantly. As you can imagine there’s nothing more satisfying than dropping on someone from above and dispatching them brutally, but it isn’t always that easy. 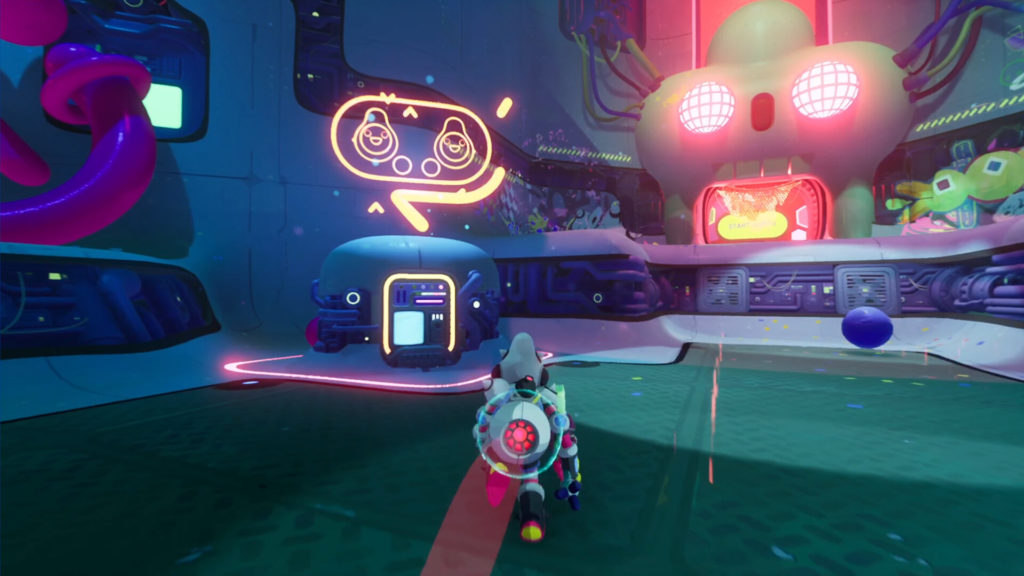 Firstly you’ll have to get used to the movement. It’s simple enough to wander around and jump, but you’ve got to master gravity if you want to start winning matches. One pull of the left trigger will swap gravity to pull you towards the direction you’re facing, and as you fall you can tweak your direction a little or dash to completely alter your trajectory. It’s a great feeling when you finally get used to falling with style, and you’ll be racking up the kills in no time.

Combat is simple but effective. All you need to do is hit the right trigger to swing your sword, but you’ll need to be locked onto an opponent by looking at them and being close enough to them first. If you’re quite far away you’ll unleash a red attack, and as you get closer they’ll change to yellow and eventually to an unbeatable green attack. Although each attack will take down an opponent in one hit, if they turn towards you and swing in with a better coloured attack it’s you who’ll be pushing up daisies.

This combat system really starts to blossom when you clash with your enemies. If you and a pesky rival both swing in with the same coloured attack you’ll bounce right off each other, and often this leads to tense battles where this happens again and again until someone makes a mistake. There’s nothing quite like having an epic clashing duel that goes on for a long time, but you’d better be cautious because there’s four players in each lobby and one of the others might just break up the party for an easy kill or two. 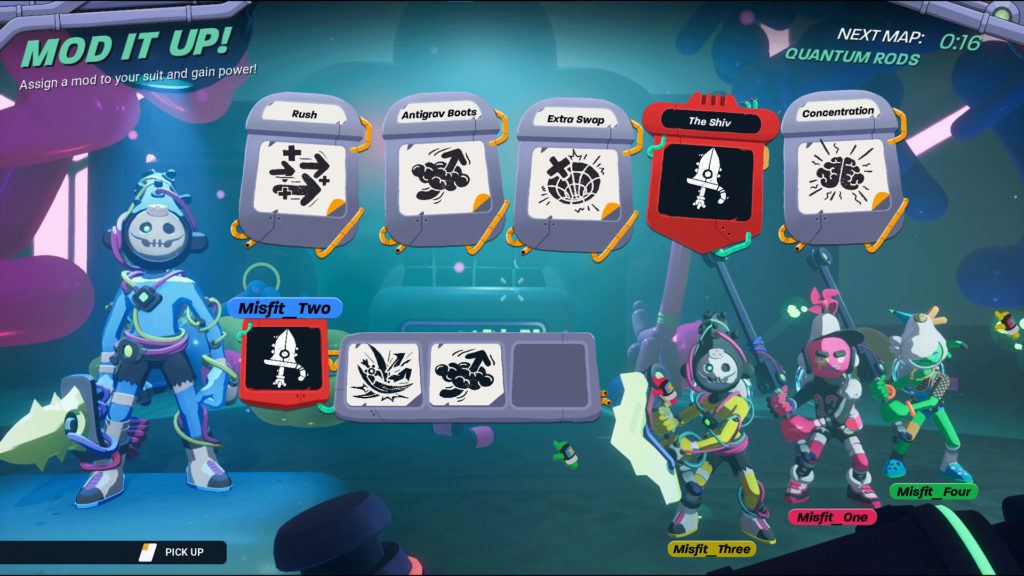 Keeping an eye on your environment is so important in Flippin Misfits, because danger could literally approach you from any direction. There’s a fantastic variety to the maps you can play on – some maps have corridors and blind corners you can use to your advantage, some have hazards like lava and mines that you’ll have to take into account, and some are even outdoors in the depths of space. Make one wrong gravity switch on an outdoor map and you’ll slowly and embarrassingly fall into a black hole while your friends laugh, so be careful and try to keep your dignity.

When you jump into a match of Flippin Misfits you’ll be thrown into a lobby of four and play five rounds with them. Each round will be the standard three minute killathon on a unique map, but between rounds everyone will be offered mods. These handy buffs can change the game, and to try and keep things nice and balanced the loser always gets the first pick.

The mods definitely vary in usefulness, but even to a new player it will be pretty obvious how much it would help to drop a mine every time you die. There are also mods that allow you to switch gravity an extra time, attack from further away or even replace your weapon with a faster one. Every match feels different because of the array of mods you’ll get thrust upon you, and it’s a blast figuring out which you get the most use out of. 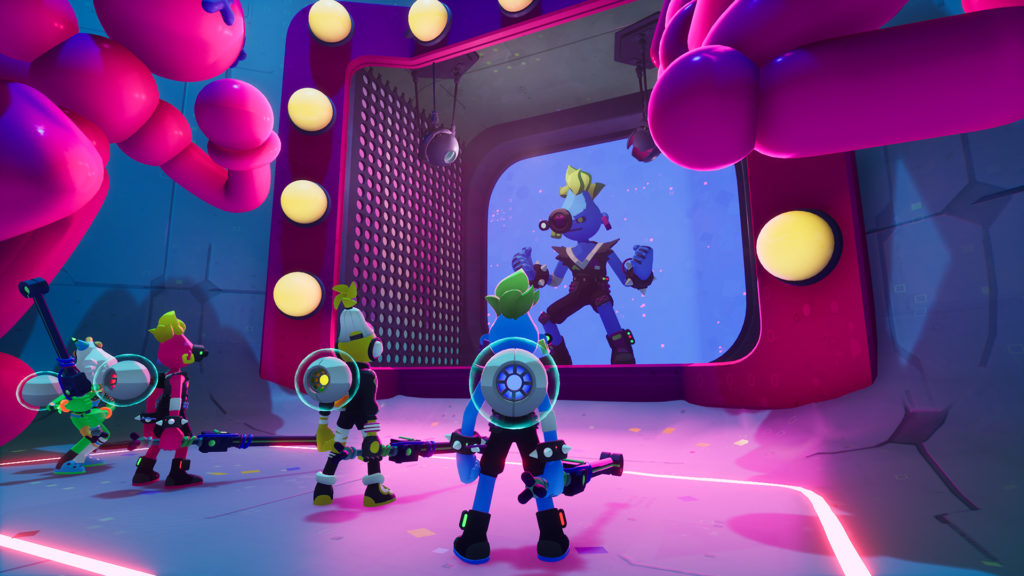 I think what really makes Flippin Misfits so compelling is how quickly you’re always thrown into the action. Respawns are lightning fast, matches never last long enough to drag if you’re falling behind and even the mod selection screen only gives you a brief moment to pick an upgrade. This isn’t a multiplayer game where you’ll have time to check your phone or your Twitch chat between rounds.

Alongside everything else I love about the game, Flippin Misfits also has one of my favourite aesthetics of the year. The vibrant pastel colours and silly environments go hand in hand, and compliment the weird avocado headed Misfits perfectly. Flippin Misfits sounds as good as it looks too, with fantastic high tempo electronic beats to bash your mates along to.

Steam Deck owners are in luck, because Flippin Misfits works beautifully on the Deck. Although only listed as “playable” due to font size, the game runs like a dream on Valve’s handheld and won’t be getting uninstalled any time soon in this house. I even thought the text was perfectly readable, unlike some verified games I’ve played. 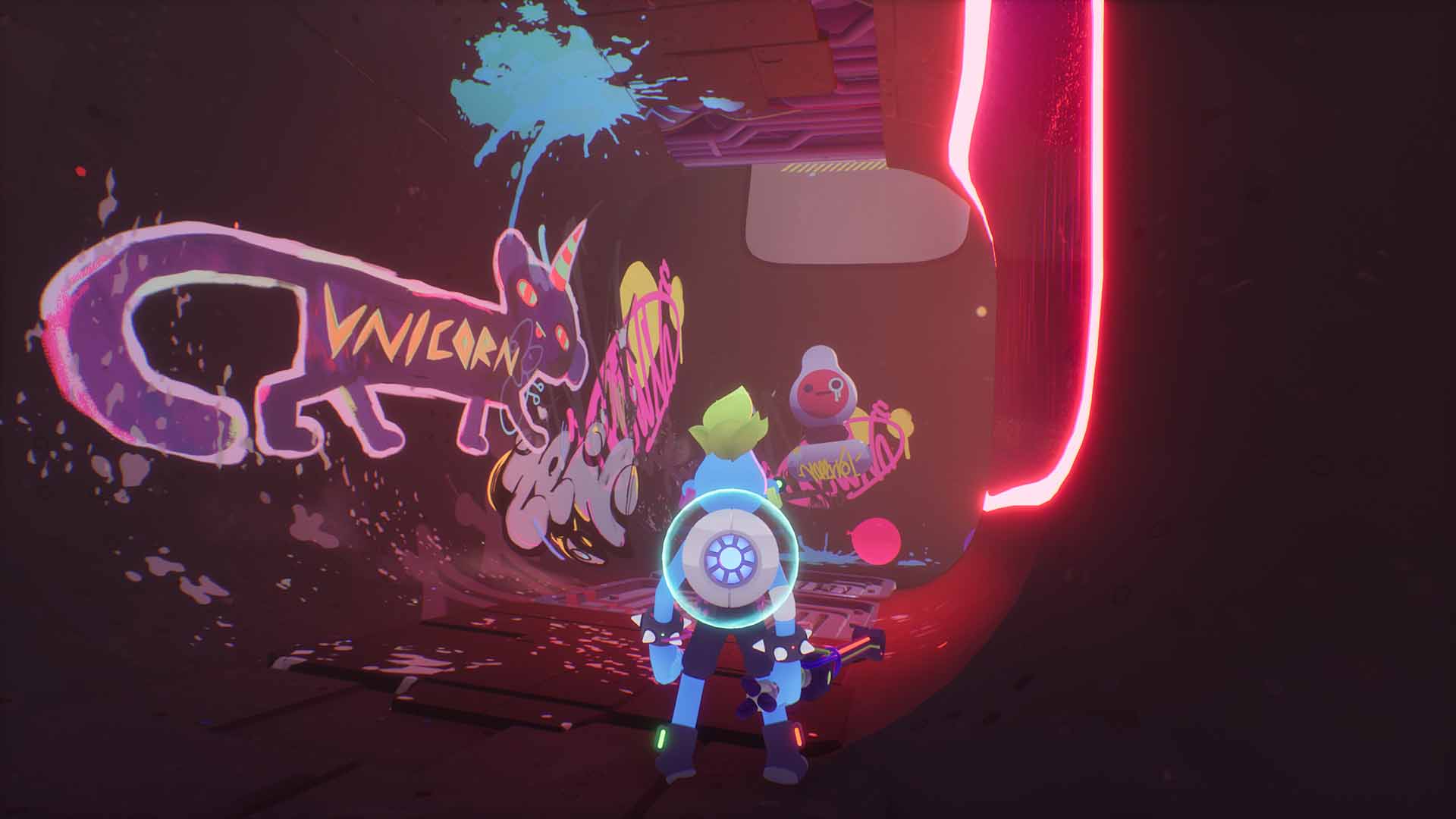 I only have one complaint with Flippin Misfits, but for a multiplayer game it’s a biggie. At the time of writing there’s no progression system or hook to keep you playing long term. I know the gameplay should really be enough, but I really feel that an online multiplayer game in 2022 should be expected to give you something to aim towards. There’s every chance that some of these hooks will come to the game down the line once the game has launched, but it’s a noticeable omission.

Flippin Misfits is an exceptional multiplayer game, with a frenzied pace unlike anything else on the market. The variety of levels and mods keep the experience fresh with every match, and with practically instant respawns you’ll never have a free moment to think about getting bored. If you’re looking for something new to play with your mates, you’ll have a zero gravity blast with Flippin Misfits.

No hooks to keep you playing
Not a lot of modes

Flippin Misfits is an absolute blast, with fast paced zero gravity gameplay that will make you shout at your friends in all the right ways.