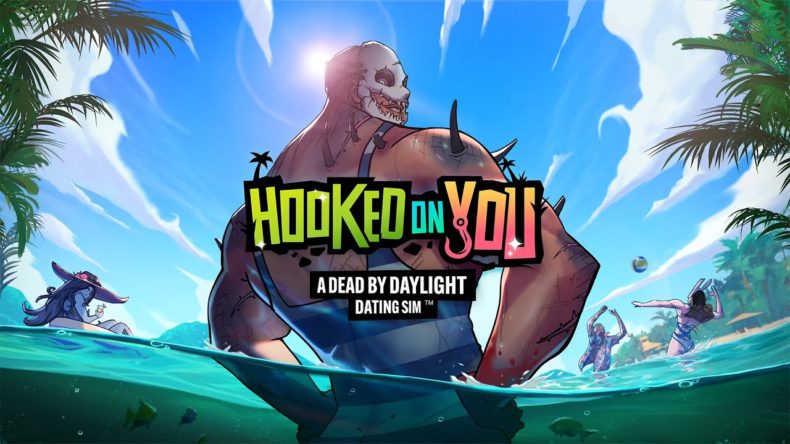 It’s no secret that I’m a fan of Dead by Daylight. The asymmetrical multiplayer horror game stole my heart many moons ago, and over 6 years after release is as popular as ever. Behaviour have kept their sizable fanbase happy with all sorts of content over the years. From new mechanics that turn the game upside down to licenced killers everyone has been clamouring for, we’ve been spoiled by our horror overlords. The greatest announcement came earlier this Summer though, when Hooked on You: A Dead by Daylight Dating Sim was revealed.

Your character washes up on the sandy shore of a tropical island with no memory of how they got there, only to find that this island is inhabited by murderers. Not any old murderers though, incredibly sexy murderers from Dead by Daylight. For some unexplained reason the island is hosting a dating reality show in which you must choose one of these killers to romance, with potentially steamy results. 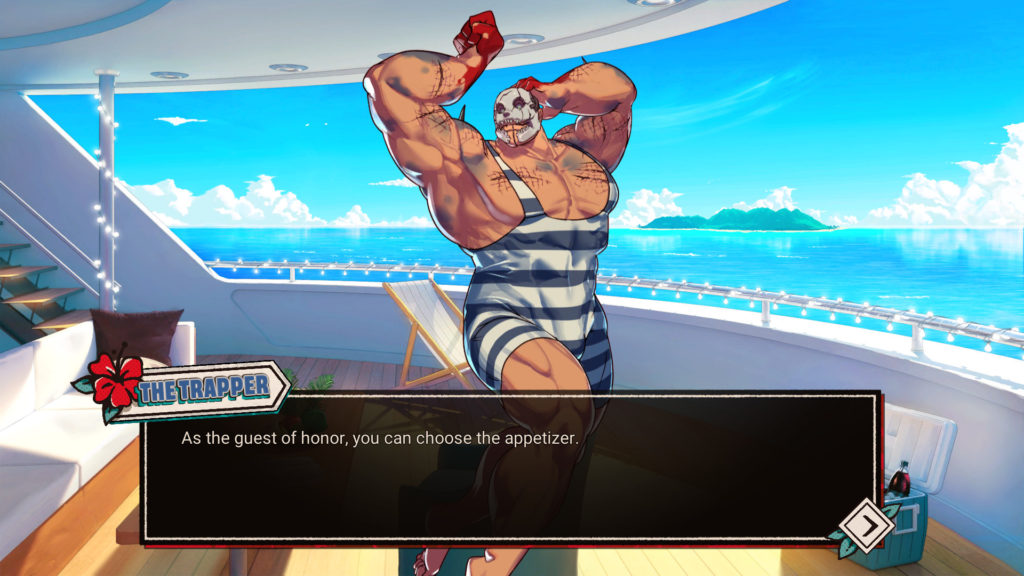 Four of the most popular Dead by Daylight killers are featured in Hooked on You: The Trapper, The Wraith, The Huntress and The Spirit. Each of your four suitors has glowed up in an over-the-top sexy redesign, so whether you’re into Trapper’s glistening muscles or Spirit’s pale complexion in bikini there’s something to quell your thirst.

The appearance of the Killers isn’t the only thing that’s changed though; they’ve had a bit of a personality tweaking too. Trapper is an insufferable jock who always puts himself first, Spirit finds the idea of society to be incredibly passe, and Wraith is awfully timid and pathetic. The whole game is incredibly tongue-in-cheek, and will certainly entertain fans of the asymmetrical horror success story.

As you might expect from a dating sim, the gameplay in Hooked on You is largely choosing between different options to change how the story unfolds. Choosing the right option isn’t just important if you’re looking for a happy ending, because if you piss a killer off enough they’ll live up to their title and tear you apart. Skipping dialogue and reloading is made nice and easy though, so don’t worry too much about losing progress. 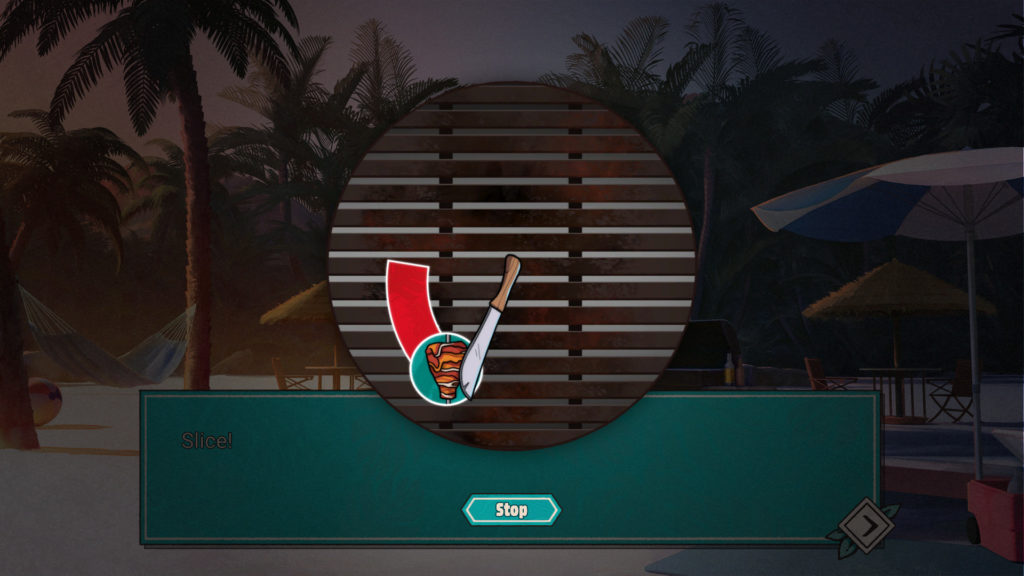 There is one other mechanic you’ll have to deal with in Hooked on You though, the skill check minigames. Lifted straight out of Dead by Daylight, these moments will test your timing by getting you to hit a small target on a spinning wheel to symbolise you finding a missing object or slicing up meat for the gang. Doing well at these is sure to impress your sexy murderer of choice, and I love that they took something recognisable by fans and added it to spice up the reading.

References to Dead by Daylight are plentiful in Hooked on You, so if you’re a long term fan you’ll get a real kick out of all the effort Psyop put in to impress you. Killers’ back stories, characters and perks are all mentioned throughout your quest for love, and they certainly made me smile more than a few times.

My main issue with Hooked on You is that I think it might actually be too wacky. Sometimes it just feels slightly beyond silly, with the narrator constantly breaking the fourth wall and chatting with the protagonist, and the Ocean getting a lot of screen time and dialogue. It just feels like it’s trying too hard sometimes, and it uses these daft moments to avoid having to tell a worthwhile overarching story. 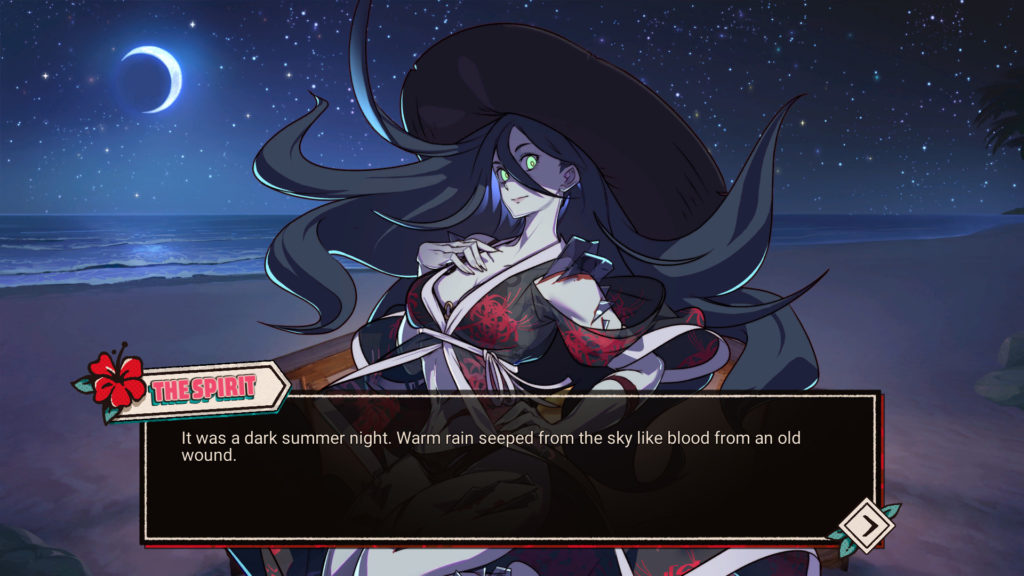 It’s a fun little distraction though if Dead by Daylight fans are bored of killing Survivors, and will only take you an hour to play all the way through. Of course there are plenty of different endings and deaths to seek out if you’re really dedicated too.

Hooked on You is an entertaining dating sim that fans of Dead by Daylight will get a real kick out of, but visual novel aficionados that don’t play the multiplayer game need not apply. It’s a bit of a shame that Hooked on You is more focused on silly jokes than an engaging story, but it’s hard to deny the pure stupidity this spinoff has to offer.

Hooked on You is an amusing spinoff that Dead by Daylight fans will get a kick out of, but it isn’t able to stand on its own.