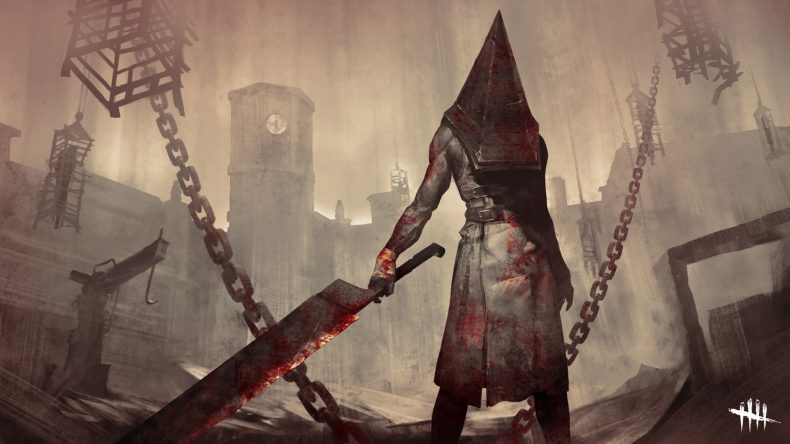 There hasn’t been a new Silent Hill game since 2012. There was a distinct shift away from video games for Konami, following Hideo Kojima leaving the publisher, and the Silent Hill franchise has since been relegated to the theme of Pachinko machines. The series has been one of my favourites since playing the second game on the PS2, and it’s presence has been sorely missed in horror gaming for a whole generation of consoles.

The announcement of Silent Hill content coming to Dead by Daylight was met with delight and shock from fans of the asymmetric multiplayer horror game. The pressure had to be on Behaviour though, releasing the first content from such an acclaimed horror series in many, many years. The new Silent Hill chapter contains 2 characters from the franchise, alongside a new map available to all players.

The highlight of the package is undoubtedly the ability to play as Pyramid Head as a Killer. The sinister and mysterious antagonist of Silent Hill is every bit as deadly outside of the series he’s known for. Sporting his trademark Great Knife, the sight of him sprinting after you dragging the oversized blade is incredibly intimidating. For anyone new to Dead by Daylight (brought in by the allure of Silent Hill content) the aim of a Killer is to prevent your victims escaping, killing them before they can repair the generators and open the exit gate. In his quest to attack, hook, and kill the survivors, Pyramid Head has a plethora of unique skills available to aid in dismantling his victims. The Rites of Judgement ability will see you carving the ground with your huge knife to leave a trail on the ground, which will Torment survivors who run over it. Tormented survivors have their location revealed to you briefly, and when downed can be sent to the Cage of Atonement instead of having to carry them over to a hook, saving time and negating some of their potential perks. Outside of tormenting the poor souls in his path, Pyramid Head can also send a wave of destruction along the ground, damaging survivors in a line through any obstacles.

These abilities all add up to you feeling powerful and oppressive against those pesky survivors. Saving time on hooking your victims gives you more time to keep the pressure on other survivors, preventing them from repairing the generators too quickly. Alongside this quicker method of dealing with downed foes, with a bit of practice you’ll be able to end a chase quickly by dealing damage through walls. There’s nothing more satisfying than accurately predicting where someone will be heading, and hitting them when they least expect it. If killing isn’t your style, the Silent Hill chapter also comes with new Survivor Cheryl Mason from Silent Hill 3. Unlike Killers, all Survivors essentially play the same outside of some unlockable perks. Unfortunately, not only are Cheryl’s perks almost useless, but her character model looks distinctly unwell.

For those of you who don’t plan on buying any of the new content, you’ll still be able to play on the new map – Midwich Elementary School. Inspired by the location from the original Silent Hill, this twisted environment really invokes the dark and corrupt feeling of the Other World. Complete with barbed wire, huge chains and huge metal fans, Midwich Elementary School has that industrial aesthetic synonymous with the classic horror franchise.

The Silent Hill chapter update is not without its faults, but for fans of Konami’s long lost series the new Dead by Daylight content really respects the source material. Cheryl is a let down every conceivable way, but Pyramid Head is my favourite new Killer in years. There’s nothing quite like chasing your victims around Midwich with the Great Knife to quell the thirst for a new Silent Hill game, and I know I’ll be putting hundreds more hours into mastering my new favourite murderer.

Pyramid Head is the best new Killer in a long time
The new map is well designed, with a great industrial aesthetic.
The new content is faithful to the classic horror series.

The Silent Hill chapter provides a great deal of entertaining content that respects the series it came from, with the exception of Cheryl's disappointing design. Pyramid Head is an incredibly well designed new Killer, and the new map nails the industrial aesthetic.