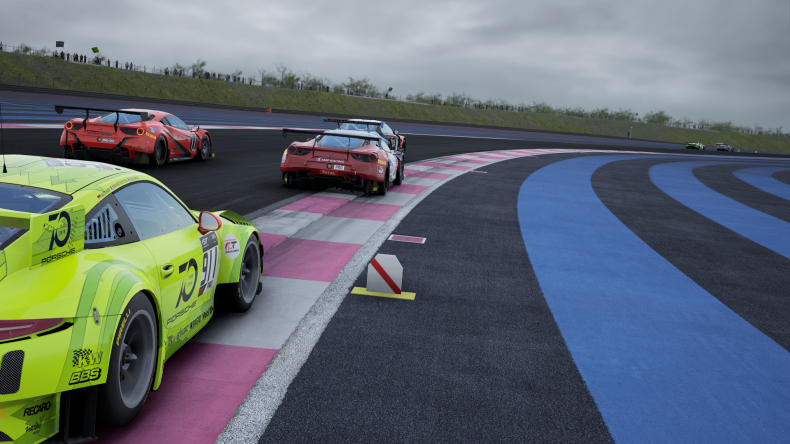 Like any fan, I’ve missed motorsport. Thankfully, eSports has kept me entertained in the run-up to the start of the 2020 season. As have motorsport games, which can now add Assetto Corsa Competizione to the growing list of this year’s racing games. It’s been out on PC for over a year now, two if you count the time it was in Early Access, but the official GT World Challenge game has finally arrived on Xbox One and PlayStation 4.

Other than the F1 games, it’s not often we see games based solely on one specific racing class, these days. Especially not one as niche as this. However, Kunos Simulazioni’s newest simulation proves that there’s still plenty of variety and plenty of fun to be had in a single-championship racer.

Much like the Project CARS series, Assetto Corsa Competizione (ACC) is more of a sim than games like Gran Turismo or Forza Motorsport. This means that its handling is a lot more twitchy and difficult to master, but having more at stake means that it feels that much more rewarding when you do get it right. This also means that ACC isn’t likely to appeal to a more casual market, because even with assists and tweaked handling via various sensitivity sliders, it’s nowhere near the level of accessibility of other sim racers. This isn’t necessarily a bad thing. Not all racing sims are designed to appeal to a mass market. For enthusiasts though, it provides a robust and rewarding race experience and, assuming that was the developer’s intended demographic, that is what matters. However, as much as the handling physics are realistic, they can also be problematic when played with a controller. Sensitivity is an issue, making it incredibly twitchy. This makes oversteering a little too common, even when you’ve fiddled about with the controls. I often found myself having to correct slides that felt beyond my control, and when you lose control completely because of the oversensitive steering, it’s like a gut punch. Especially when you’re a long way into an endurance race. It isn’t game-breaking, but it does sometimes feel like Kunos Simulazioni made the same mistakes that Slightly Mad Studios made with the first Project CARS, in building a game entirely around steering wheels. It can almost feel like controllers were an afterthought.

This also leads to some rather interesting driver animations, too. In cockpit view and playing with a wheel, there’s an almost stop-motion look to the wheel-turning animation, as if it can’t match the wheel movement 1:1 like most other racers. Worse, when played with a controller, it’s like the animation is turned up to max speed as the slightest push of the stick results in a full turn of the wheel. It certainly breaks any immersion, even going so far as to make me never want to play in cockpit view. This isn’t a problem unique to the console version either, it hasn’t been fixed in the PC version that is now two years old. It’s bizarre. Problematic as these things can be, they don’t stop ACC from being a fantastic simulation of GT racing. Each race feels exciting and realistic, the AI fighting for every position on the grid. I have spent many laps trying to catch opponents, having to postpone overtake attempts because they’re defending so well, and the eventual pass never failed to feel like a reward earned.

Endurance racing is even more exciting, as the sun goes down and the light fades. You need to rely on your knowledge of the track and keep your wits about you, as the cold of night drops temperatures, making grip a more precious commodity. You may have to adjust your braking distances and you’ll certainly need to be more aware of those around you. Overtakes and defences are more difficult and dangerous when the darkness envelops the circuit.

This level of realism pervades the entire game. Rain severely affects how you drive, and if you aren’t careful you’ll be playing rally driver as you run wide and have to slide your way out of gravel traps. Or you could end your race altogether, if you’re really unlucky. This realism extends to tyre pressures which, if too low, will mean that your race engineer will advise you to stay away from the curbs on corners. You really ought to listen to him too, if you want your race to go smoothly. It’s a shame that “smooth” doesn’t describe ACC’s framerate. It isn’t bad, seeming to stick roughly around the 30fps mark, but honestly, it’s disappointing that even on the Xbox One X, it doesn’t see an improvement. It does look good though, whether played in 1080p or 4K resolution, there is a wonderful amount of detail both on and off the track. The circuits were laser scanned for extreme accuracy, with every imperfection visible in the track surfaces. Each car from the GT World Challenge is recreated with an astonishing level of detail, inside and out. As a personal aside, I particularly like the “passenger seat” camera in replays, which shows off the interiors quite nicely. This attention to detail extends to the weather and the day/night cycle too, as you can even see the sun rising and falling, the shadows changing in size as overnight races push into, and out of, the dark. In a nice touch, this even happens during multiplayer races, though at an accelerated pace to match the shorter time limits.

When you start your career in ACC, you’re put into the junior programme and put through a series of test drives at Monza. In your Lamborghini, you’re tasked with driving laps around the Italian circuit to help you get a feel for the handling and for the game to work out your level of skill. It starts you off on a dry track during the day, then throws you into the rain and then again during the dark of night, all to give you a taste of what to expect during your time in a GT car. Depending on how you perform, the game will offer a difficulty setting that you can opt to accept or ignore, before letting you choose your car for the coming season.

Whether you choose to play through career mode or customise your experience through championships, single races of whatever length you desire, or online challenges, there is more than enough content in ACC to keep you occupied for hours, weeks or even months, proving that the single-championship racer is still a viable option for developers to pursue. However you play Assetto Corsa Competizione, even with its sometimes-problematic controller settings, you will find an excellent and rewarding simulation of GT racing. Though perhaps one designed with hardcore racers in mind.

It may be a little rough around the edges, but Assetto Corsa Competizione provides an excellent simulation of GT racing.