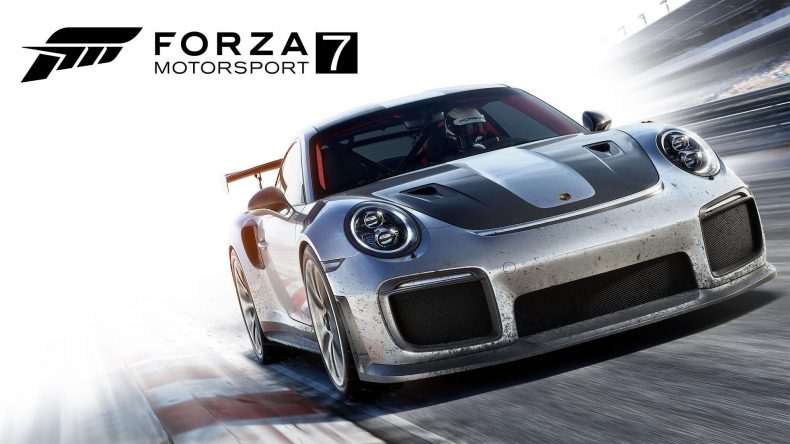 When Forza Motorsport 7 was officially announced at E3, I won’t pretend that I wasn’t excited. Whether it be the openness of Horizon or the circuit racing of Motorsport, the Forza franchise is one of my favourites. I spent an ungodly amount of time playing Forza 6 and Horizon 3, enjoying the very different styles of both games, so what can the newest addition do to up the ante, especially in the face of such big opposition in 2017?

Well, the short answer is, not a lot. The handling is as tight as ever and the Drivatar AI is still some of the best we’re likely to see for a while yet, but in trying to make a few changes to the career mode, Turn 10 has over complicated a system that, frankly, didn’t need to change that much. This makes it more of a grind when earning money and unlocking the right to buy the fastest cars. Yes, you read that right; you now need to have reached a specific car tier before you can buy certain vehicles. But we’ll come back to that later.

After that cringeworthy Porsche unveiling at the Xbox E3 briefing, it’s no surprise that the new Porsche 911 GT2 RS is the first car you drive in Forza Motorsport 7’s tutorial race, at the new Dubai street circuit that debuts in this game. Weirdly, Turn 10 decided that one tutorial race wasn’t enough, so we get two more; one to show off the new truck racing and one that shows off the new changing weather effects. It’s a nice idea, but almost everyone wants to just get into the game, instead of being forced to play these technical showcases. It does at least show off just how different the handling is for each vehicle type and especially how much harder it is to drive in the pouring rain. Handling should always be the defining point of a racing game; it’s the hook on which the rest of the game hangs. Over the years, Forza Motorsport has seen its handling model evolve into one of the best out there, and this is the absolute pinnacle of that evolution. Little hatchbacks can be tossed around Silverstone with nary a care in the world, thanks to their short wheelbase and low power; Le Mans Prototypes need a featherlight touch on the accelerator to avoid lighting up the rear tyres, especially with their light frames and immense power; and those new trucks are surprisingly nimble, but still have a wider turning circle by virtue of their weight. But it’s more than just the realism of the physics, it’s also about how smooth the input is to make sure the cars don’t feel too twitchy. Project CARS suffered from overly twitchy handling, but the sequel at least corrected that somewhat, even if it still wasn’t smooth enough. Forza Motorsport 7 is as smooth as silk, no matter what car you’re driving. That’s not to say mistakes aren’t possible, quite the opposite, but it does mean that these errors are down to the driver. That is what the rewind feature is for.

The actual racing is still incredibly exciting, probably more so than any other traditional racer out there, thanks to that patented Drivatar AI that Turn 10 brought to the table this generation. Not only does it make for some thrilling battles, it means that if the player makes mistakes, so too can the AI its driving style is based on. It’s not always the most sportsmanlike, but then have you seen what some of today’s pro racers are like? Petulant children, half of them. It does have a tendency to be a bit too aggressive though, regularly shunting each other (and you) through corners or under braking, which can get a bit frustrating when you’re just trying to get around cleanly. Especially when you’re wanting to fulfill the conditions of a mod card or two. Here we are then, at the start of Forza Motorsport 7’s problems. Mods were a nice addition to Forza 6, offering the chance to earn bonuses based on the objectives set out by the cards you got, but they never got in the way. First party Xbox games seem intent on pedalling loot boxes lately though, such as Gears of War 4 and Halo Wars 2, so it’s not entirely surprising to see them appear here, but the game continually pushes them on you. Got a bit of money in the bank after a few races? “Why not buy prize crates,” the narrator chimes in. For the third time today. Please mate, just shut your mouth and let me decide what to do with my virtual currency. This also brings to light the recent controversy over the handling of this new game’s VIP membership; no longer does it give players a blanket 2x rewards for all events, but instead offers just five mod cards, each with five uses, that give double rewards across certain events. Anyone shelling out for the Ultimate Edition or for a separate VIP membership, will likely be unhappy with this massive change to this feature, even more so because Microsoft sneakily changed the Xbox Store’s description of it post-Ultimate launch.

Now, the prize crate issue wouldn’t be so bad if it weren’t for the new progression system introduced in Forza 7. It’s not just the simple driver XP and affinity XP anymore, indeed affinity isn’t even a thing; now you have driver XP, Series Points (SP), and Car Tier points. Driver XP works as before, offering a choice of reward every time you level up; Series Points unlock the next tier of the career mode’s Forza Driver’s Cup; and Car Tier points unlock better rewards when you level up, plus unlocking certain events and the ability to buy the fastest cars. You might think this overabundance of progression systems would yield greater rewards and you’ll be drowning in cars, but you’d be very wrong. Somehow you end up with less money than ever, which inevitably forces you to buy prize crates for mod packs in the hope that you get some good cards to boost future earnings. I can’t help but feel that the game was designed this way, but it almost feels like a free-to-play game as a result, as you grind out credits or buy mods to progress faster. At least you aren’t spending real money for this, I suppose. If I’m honest, this all drags back what would otherwise be a stellar racer. The Forza Driver’s Cup I mentioned earlier serves as the new campaign, with six tiers that span several choices of disciplines and special events. Each tier needs a set amount of SP to unlock, with series offering, say, up to 2000SP depending on how well you do in the races contained within. It’s entirely possible to win just three or four series to unlock the next tier, but you can go back whenever you wish, should the completionist in you want to collect every trophy possible. These races take place all over the world, on around 30 tracks, and with about 700 cars to choose from, there are tonnes of different ways to race around these circuits. When you take into consideration the new weather and time-of-day effects, this adds to the different ways to race. Forza 6 introduced rain to the fold, which was great but very predictable, whereas this new game’s dynamic, changing weather really affects how the game plays. You can’t just memorise where puddles form anymore, and the surface is much, much more slippery, making braking and cornering incredibly treacherous. Luckily, if you’re new to the series, there is a new anti-friction assist to help on just such an occasion.

The weather also affords some quite breathtaking views, especially when a storm rolls in early on, only to dissipate quickly. The sky brightens and the sun’s rays filter through the gloom, reflecting off the wet surface and the puddles that remain. Night races aren’t always frozen in time anymore either, and that first time you see the beginnings of sunrise? Gorgeous. The cars themselves look incredible too, with realistic reflections and damage modelling; and they sound fantastic. The throaty roar of a muscle car; the signature whine of an Aussie V8 Supercar’s turbocharger kicking in; or the higher-pitched scream of F1 cars are all present, and they all sound different from inside the cockpit, as they should. Tyres squeal under the strain of tight cornering, smoke kicking up if you push too hard or lock up your wheels braking before a bend. Unfortunately, the same quality hasn’t quite been lavished upon the trackside details. Some of it is excellent, like the camera helicopters that fly in beside bridges, or the way sand blows across the track in particular areas of Dubai’s roads; but then there is the blandness beside most countryside tracks, or even the unrealistically half-empty stands during a NASCAR event. The worst though, is the PS2-quality trees. It might sound picky, but they’re very noticeable even when passing by at 120mph, with most of them being a series of flat textures. It’s unacceptable on my 1080p TV, I can only imagine how much worse they will look when the Xbox One X displays them at 4K, next month. Before I wrap this up, I should say that I also spent a little while in the multiplayer ‘hoppers’ during my time with the game. These are basically set race types, with my favourite so far being the hatchback one, and you’ll jump straight into a lobby and get racing. Despite the almost total lack of penalties present so far, the online racing is fantastic fun, especially as each hopper only allows homologated vehicles, restricting them to a specific power level to keep things fair. This streamlined approach to multiplayer works very well, and hopefully the whole thing will remain stable as the servers become more populated and the new leagues are implemented later.

Forza Motorsport 7 is certainly the best circuit racing experience out there, for my money, but there’s little doubt that the more grinding, prize crate-centric progression stops the whole experience from being as good as its competition. It does still know how to keep its racing fun and exciting though, which is something few other simulators do.

I can’t deny that Forza Motorsport 7’s racing is some of the most fun there is, but its overabundance of progression systems make it more of a grind than it should be.