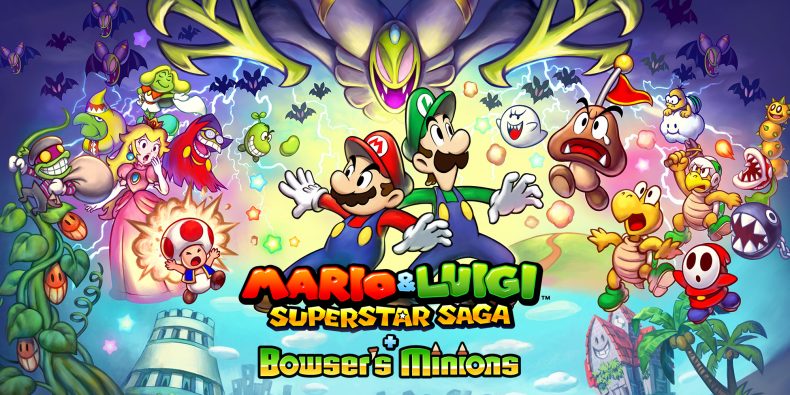 Jumping is the raison d’etre of Nintendo’s portly plumber, his entire life has been defined by the fact his legs propel him into the air again and again and again. In Superstar Saga, Mario and Luigi find themselves in the Beanbean Kingdom, a foreign land they’re not familiar with, but it’s one that knows them.

Jumping gets Mario and Luigi everywhere, across gaps, up cliffs, even into the Kingdom itself, because the border guards won’t let the brothers enter until they’ve proven just how good they are. The people they meet regard them with an air of familiarity until once again the leap up to jog the person’s memory ‘It’s them!’ it seems their reputation precedes them in this strange land.

Their presence with Beanbean is to track down the evil witch Cackletta, who has stolen the voice of Princess Peach. A voice belonging to someone of great beauty is required to awaken the fabled Beanstar, a mystical jewel with the power to grant the wishes of whoever wakes it from its slumber; so Peach’s voice certainly fits the bill. Unable to bring himself to kidnap Peach while she’s unable to communicate Bowser insists that he takes the Mario brothers to Beanbean to track down Cackletta and rescue Peach’s dulcet tones. A few boss fights later and Bowser has amnesia, and Mario and Luigi are venturing kingdom-wide tracking down macguffins that push the story along. This isn’t new by any means, Superstar Saga + Bowser’s Minions is a remake of the old Game Boy Advance game Superstar Saga, and yes, I say remake because the entire game engine has been retooled for a new generation; the sprites have been redone and extra elements have been added, including amiibo functionality and the titular Bowser’s Minions sub-game. AlphaDream has done a fantastic job repurposing this game for 2017, the sprite work is exemplary with some beautifully smooth animation that just oozes personality. Whether it’s the way Mario and Luigi gesticulate wildly as they attempt to describe something to someone in mock Italian, when the bros figure out a new combination move in the middle of battle or when a boss explodes in a shower of light and sparks, there’s rarely a moment that isn’t geared to elicit a smile from the one who’s playing, it’s stunning work.

Battle is taken in a turn based fashion with certain elements of rhythm action to enhance or defend. During attacks you’ll need to press a button at the right time to make your attack hit a second time, or harder, and in defence you’ll be able to dodge or strike back. Using this it is possible to get through fights without taking any damage, but only if you’ve got the timing down pat. Timing presses also comes in for the games combination attacks (here named Bros. Attacks), which use Bros. points to execute. Here the brothers Mario will link up to deal massive damage, providing you get your button presses correct.

The layout of the world brings back memories of Legend of Zelda: A Link to the Past (AKA the best game ever made), there’s little wasted space, with each section of the map hiding something or other somewhere, whether it’s a block to hit, a subterranean bean to find or a cave to explore, there’s an element of Metroidvania here too, as you’ll only be able to access some areas after acquiring new abilities, thankfully there’s a lot of handy warp pipes to help you nip around the world when you gain a new power. How you use these powers though has been complicated slightly. As you acquire these powers the bottom touch screen fills up with icons for each of them, and they can be flicked between by tapping the relevant icon on the touch screen, or you can scroll through them by pressing L or R, while it’s quicker and more time efficient to use the touch screen I kept using the shoulder buttons instead, forcing myself to listen to the brothers’ soundbites as they speak out each power as you go through them, driving myself slightly mad. The bottom screen also hosts the map, which has to be called up and then stays up until you dismiss it, making you have to scroll through the powers unless you turn the map off, but the map’s so handy and you’ll constantly have to keep flicking it on and off to make the most out of it.

The full map is actually accessed by pausing the game; here you’ll see the Beanbean Kingdom in all its glory along with a giant arrow pointing you to where you need to go, so there’s never a reason to be confused as to where you’re supposed to be going. Also here you can outfit your bros with new dungarees and badges which will give them stat buffs and general ability enhancements with which to ensure battles go in your favour. There’s another thing here that you really should pay attention to as well, it’s the button that transitions to the Bowser’s Minions sub game.

Pressing that button takes you to a new splash screen as Yoshis sit and watch the curtain raise on another story taking place in the Beanbean Kingdom. After Bowser’s airship is downed at the start of the game the Koopa King’s minions find themselves spread across the land. Lost and without a purpose without their king a lone goomba takes it upon himself to take charge and lead the rest of the minions to find their boss. Bowser’s Minions is a completely different game style to Superstar Saga. This is more of an RTS-lite compared to SS’s JRPG leanings. You’re tasked with getting the gang back together, then putting your group of minions into a formation capable of winning the battles that lie ahead. Minion types are grouped into ground, flying and ranged attackers, Ground (red) are good against ranged (yellow), but weak to flying (blue), ranged are strong against flying and flying are weak to ranged, it’s a rock, paper, scissors scenario. You’ll get to see what you’re up against before each mission, and will need to pick your team’s units accordingly before watching them rush headlong (literally) into battle. Once battle is initiated it’s almost completely hands off, you get certain points to spend to give your troops a boost or shout down enemy special attacks, or you might need to tap to ensure a good contact for the attack of one of your units, but that’s pretty much it. It’s not really anything special in any sort of sense, but the excellent dry wit of the main game is at least present.

Superstar Saga was already a good game, and it’s great to see it given a fresh lease of life with a lick of paint and a secondary game to play. Bowser’s Minions is certainly a Marmite game, it won’t be for everyone but it’s a nice diversion from the main story. Although, considering how good the main story is, you might not want to be distracted from it. It’s good looking, humorous, and overall really good fun to play, there are mild annoyances with how the touchscreen is put to use, but they’re unlikely to spoil the joy the game will ultimately bestow upon you. It’s been fourteen years, but it’s time to get lost in the Beanbean Kingdom again.

Much like Mario himself, Superstar Saga has changed in looks, but it’s still every bit as good as it was back then.