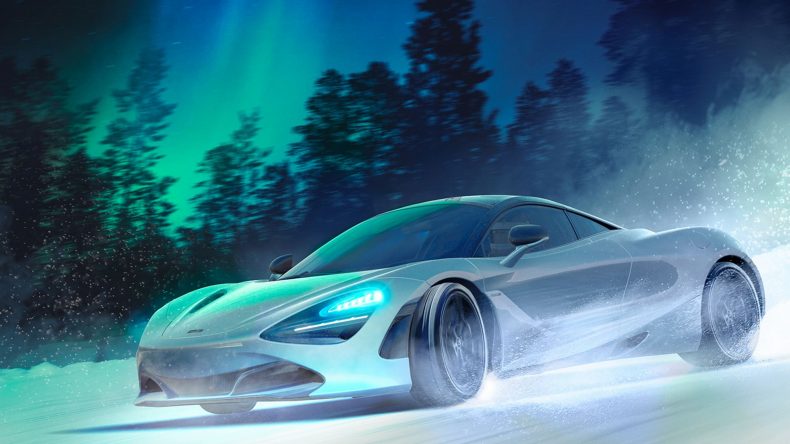 The stage is Laguna Seca, in a dried up lake bed in central California. The weather is unusually stormy as the sleek LMP900 cars line up on the grid. The red lights come on, engine notes rising above the sound of the torrential downpour; one, two, three…

Out go the lights and the cars spin their wheels on the wet asphalt, my prototype Audi R8 managing to find a little extra grip as I find myself catapulted up the ranks. From twelfth to sixth in a matter of seconds, narrowly avoiding a shower of carbon fibre as two cars tangle up ahead. Cars squirm under braking going into the first corner, a tight left-hander, and everything kicks off. This is Project CARS 2. Races are always fraught with tension as you fight for position, or simply fight to keep your car on the road, and even more so when the weather takes a turn for the worst. This is helped by the improved controller handling this time around, with almost all of the kinks ironed out for this second instalment. Cars don’t violently spin as you simply try to correct a minor slide; this time they’re much more responsive and the turning is smoother, although don’t think that this means it’s easy. You can’t simply throw a GT1 car around corners, they’ll bounce and slide like a real 600bhp monster would.

This will change from lap to lap, thanks to the new physics model that Slightly Mad Studios has implemented, with tyre and track surfaces evolving and changing with the temperature and forces put through them. This means that grip levels will constantly shift throughout the course of a race weekend. When the track gets wet, those levels will change dramatically, and you’ll have to follow the correct line in order to carve out a dry lane for maximum grip in treacherous conditions. This is the level of detail on offer here, and it’s way more than anything else I’ve seen in a racing game. That realism is carried into the visual side of things, with every car and location mapped down to the finest detail. With nearly two hundred cars and more than sixty locations, each with several track layouts, that gives you some idea of how much work has gone into the game. Every car, from the beginner classes like Ginetta Juniors to the LMP1 monsters of Le Mans, looks and drives like its real-life counterpart, complete with damage modelling and tyre deformities. Each circuit looks stunning, with some of my personal favourites represented in all their glory. Driving around Spa is always special, but there’s an extra layer of depth to this experience.

The AI sometimes makes things special for the wrong reasons, however. It’s frustrating to see it struggle to master even basic corners in stormy conditions, with one notable case being a race around Monza in Formula X cars. The weather made for some incredibly tough handling moments, but seeing almost every single opponent spinning and crashing was embarrassing. At one point, the historic Curva Parabolica was littered with crashed opponents, forever stuck together just off the track. Yet on other occasions, especially in the new Rally Cross discipline, the AI would masterfully slide around the dirt tracks in the nastiest of weather. The AI is Project CARS 2’s biggest failing, as it never feels consistent. You will find yourself constantly tweaking the difficulty slider in order to find the right balance, and even then you’re not guaranteed to get what you expect. You’ll find your fellow racers will lag behind in qualifying, their times several seconds off the pace you set. But let’s say you decide to skip to the end of the session (inexplicably, you can’t just speed up time while you sit in the pits, a la F1 2017), you might suddenly find the AI’s speed increased well beyond their previously displayed skill, with their times improving by impossible amounts. It happens nearly every time you try it too, meaning that you’re basically forced to sit and wait through qualifying sessions even when you know you’ve got it in the bag. In races, sometimes you’ll find one or two of them channelling Lewis Hamilton, leaving you and everyone else to eat their dust as they speed away into the distance, setting unfairly quick lap times. This inconsistency just makes for some frustrating times in an otherwise great racer.

The career is certainly the highlight of the game though, with its incredible depth and freedom of choice. If you want to start at the very bottom and work your way up, go for it; but you can also start much higher, with only the final two tiers locked from the beginning. You aren’t restricted to certain teams within your chosen class either, as you can pick any team livery you wish and jump into the action. You’ll customise your season, going for a full or shortened calendar and choosing whether you want to include practice and/or qualifying sessions, and you can even earn yourself some extra racing opportunities, depending on your performances. Much like Forza Motorsport 6, you’ll develop an affinity for certain manufacturers as you drive their cars during your career. This earns you invitations to events driving for that manufacturer, in races across all disciplines all over the globe. There are other invitational events unlocked throughout your career too, split into categories such as loose-surface racing, and they keep things from growing stale as you drive race after race in your career. The amount of content is staggering. Some races will have you driving on real roads in point-to-point events, but these rarely feel at home in a game that champions true motorsport simulation.

Unlike other games in this genre, Project CARS 2 doesn’t claim to be particularly accessible. It is unashamedly a full simulation of motor racing, which will limit its audience somewhat, especially if you’re wanting another Gran Turismo or Forza experience. While it is much more accessible than its predecessor, thanks to the new controller settings (that remain fully customisable, and I suggest you do just that to get the most out of the handling), it is still far more brutal and unforgiving than anything else in its niche. But it’s also the most comprehensive racer out there, and even its AI issues won’t stop you from having a fun and rewarding time.

AI issues aside, Slightly Mad Studios has put together an astoundingly deep racing simulator with an enormous amount of content.