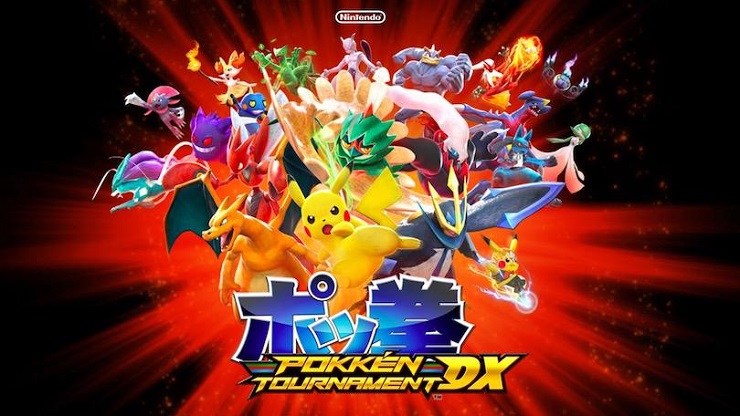 The idea of reviewing remasters surfaces again with the Switch version of Pokkén Tournament, this time under the guise of a ‘DX’ suffix, and with five more fighters than the Wii U version (albeit only one more than the original arcade game); thing is, unlike the other examples of Wii U re-releases for the Switch, this one was hard to justify at announcement, and it’s even harder to justify upon playing.

The Wii U was a flawed console, poorly marketed, and a commercial failure. But it did have some truly brilliant games in Mario Kart 8, Splatoon, Mario Land, Paper Mario, games that were great and a lot of people missed out on due to not owning a Wii U. With the Switch riding high since launch and a new audience for Nintendo to bring some of their forgotten gems to, you can understand them wanting to give those games the attention they deserved. Pokkén Tournament never really deserved that sort of attention.

This is a fighting game looking to leverage the popularity of Pokémon and essentially act as a gateway to the fighting genre for Pokémon fans. It delivers a good fighting experience, one full of spectacle and excitement. It’s very flashy like a Marvel movie, or, coincidentally, a Marvel vs Capcom game, albeit without a similarly sized roster or considerable depth. The thing is, while it’s looking to provide a palatable fighting experience for kids to enjoy it also over-complicates the genre with its insistence of shifting phases mid battle; it’s a mechanic that’s as unwelcome as it is unneeded. Let’s face it, we know 2D fighters work on a single plain, even Tekken – that Bandai Namco themselves make – takes place on a 2D plain but allows 3D movement, then there’s Capcom’s venerated Power Stone that shows fighting can work in a 3D environment, but Pokkén tries to marry the two together and when plains switch constantly it can be easy to miss the transition and you forget that you no longer have freedom of movement.

The idea behind it is that in the 2D plain ‘Duel Phase’ attacks deal more damage at the expense of freedom of movement. They also allow you to execute upper attacks to prevent air attacks, and lower attacks to upend your opponent. It’s just unnecessary when the fighting itself is pretty solid.

There’s no customary Pokémon elemental system here, but the rock/paper/scissors mechanic (they even refer to it as such) is present between normal, grab, and counter attacks. Normal trumps grab, grab trumps counter, and counter trumps normal, so there’s an element of tactics to see what your opponent is throwing and react quickly but accordingly. But overall it benefits button-mashing as well as careful thinkers, if not more so; each person will see varying degrees of success. The button set-up also doesn’t help, as they’ve curated the buttons to accommodate players being able to play each other using a joy-con each, and while the face buttons are fine it’s the shoulder buttons that have issues. Singularly, once again, it’s fine, but hitting both together activates Synergy mode, which increases damage output as well as doing a nice light-show. Before your time in Synergy mode runs out you can also do a Synergy Burst attack, which is basically a super move. But, attempting to push both the L and R bumpers together is met with inconsistent results: regularly I found my chosen Pokémon either blocking (R button) or calling on a support Pokémon (L button), my actual desired move was rarely executed, which considering how easy it is to perform combos can be a killer.

It really is as though the little details have been ignored here, which is sad for a fighting game powerhouse like Bandai Namco. Characters and UI look great, and while the backgrounds look great the stuff populating it looks awful. Every background Pokémon looks like it’s actually a Ditto copy, and they’re animated like puppets on sticks. I also mentioned how complicated the whole fight setup is, but the tutorials are so long winded that most people won’t sit through it all unless they want to be pro, but this isn’t the sort of game to foster pro-competition, so I don’t know who these are aimed toward.

Finally there’s competitive play, decent online and with a Switch each locally, but split screen is nigh on unplayable. You get half a screen each, but then half of each person’s screen is taken up by a colour border, then after you factor in the UI there’s not really a lot to see. It’s bad on a 47 inch screen from less than two meters away, but it’s even worse in handheld mode, really not good for playing with friends out and about. Last negative has to go to the character roster. In most other games a twenty-one strong line-up would be a major plus, but the fact there are more than twenty-one fighting types in Pokémon alone, and most of them are ignored here is unforgivable, especially with two different takes on Pikachu, for no real reason. This really grates during the Ferrum League campaign where you have to fight multiple fights per League grade before you can go up, because of the sheer amount of fights you need to take on you’ll fight the same pokémon over and over, it all feels a bit too same as a result.

More positively though, there are plenty of game modes. If you’re alone you can take on training or singular battles, although my favourite is the daily challenges, where a series of conditions are placed upon the competitors, and you get rewards for taking part, usually more currency and titles to customise your profile with, but it’s a good distraction when you don’t have any buddies around to play with.

It’s kind of sad really, as Pokkén deserved more than this, especially with the pedigree of Bandai Namco at the helm and Nintendo’s own work with the Smash Bros games. It’s definitely a decently crafted and accepting fighter, but the lack of attention to detail really works against it. What’s good is good, but not exceptional, what’s bad sticks out considerably, and is impossible to ignore. Kids will like it though, as they can ignore the tutorial and have a great time randomly pushing buttons and marvelling at the pretty lights and colours, but while it’s true that it’s easy to pick up and difficult to master, the question is, just who is going to?

A great spectacle
Easy to pick up and play

Overly complicated
No attention to detail
A severe lack of fighters

Pokken is a fighting game that while decent could do with understanding that complexity doesn’t necessarily equal depth.