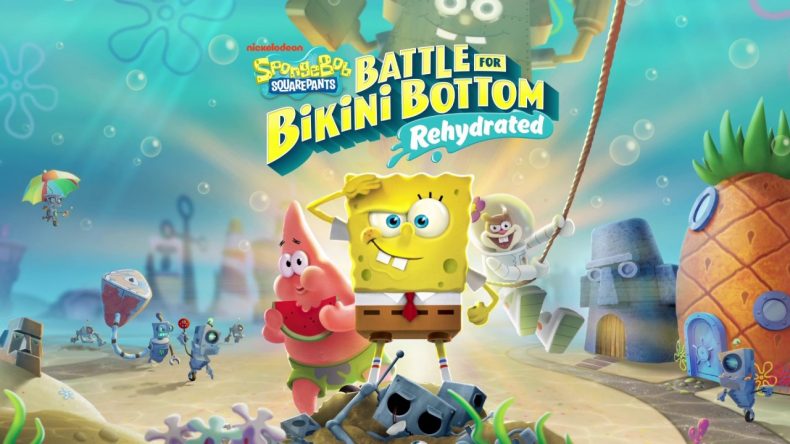 It’s quite an odd thing to realise that Spongebob Squarepants: Battle for Bikini Bottom was released so long ago that anyone who played it and loved it as a child is now well into adulthood. It’s an even odder thing to realise that if those people played this new remaster – sub-subtitled “Rehydrated” – they’d probably love it just as much.

Spongebob Squarepants is an enduring show, though, one that caters as much to the grown-ups with sly gags and knowing winks as it does to its younger audience with all its hapless, slapstick whimsy. And that theme song, of course, still isn’t getting old. Battle for Bikini Bottom originally came to the PS2, Xbox and GameCube (which is where I played it) in 2002 and, while it wasn’t necessarily a hit at launch, it soon garnered a cult following and came, retroactively, to be regarded as one of the best TV show tie-ins ever made. Rehydrated presents that same game with a complete visual overhaul, a massively improved framerate, and some tweaks to the controls and feedback that make it feel that much smoother and more precise. In short, it’s absolutely joyous to play.

For one, it’s so damn colourful. The original’s washed-out, low-res visuals were a by-product of the time, but Spongebob Squarepants: Battle for Bikini Bottom Rehydrated looks gorgeous. Colours burst from the screen and everything is so busy and vibrant. The modernised animations, too, are silky smooth. The storyline kicks off when Plankton unleashes an aybof robots on Bikini Bottom, thanks to his Duplicatron 3000 machine, and it’s up to Bob, Patrick and Sandy to put a stop to it. This being a kid’s game from the PS2 era, that mostly involves bouncing around the fairly nonsensical worlds and hoovering up various collectibles. Shinies are a currency used to unlock certain areas, while collecting Squidward’s golden spatulas let’s you advance through the worlds. Finally, there are Patrick’s socks – ten of which will also reward a spatula.

Each stage is a mishmash of jumping puzzles and light combat, with certain areas only accessible by a particular character. Once you have freed Patrick and Sandy, you’ll be able to switch between either of them and Bob at bus stops throughout the stage, usually right before you need their individual skills. Bob can wear a bubble helmet to break blocks above him, whereas Patrick can bodyslam the ground and pick up objects or enemies to throw at targets, and Sandy can use her lasso as a weapon or glide across larger gaps. None of the environmental puzzles are particularly taxing, but they’re spread out just enough to keep the action engaging at all times. You’ll rarely be able to stand still without an enemy appearing or a jellyfish floating close enough to sting, and obstacles like high-speed slides, bounce pads and target switches keep you in things to do. Boss fights punctuate the stages – including a fight with Robo Squidward which was cut from the original release – but most won’t offer a great deal of challenge for seasoned veterans. That said, this is still very much a game for younger players and my kids got – and are still getting – plenty out of the rich world and busy stages. The show’s large cast of characters almost all get a role or nod in the campaign, and the trademark humour is present throughout. Watching Spongebob surf a multicoloured raceway on his tongue, or bounce around collecting underpants in place of extra lives are examples of just how fun and faithful this game is.

If anything, the checkpointing could have done with a tweak. Sometimes the combat can be frantic and the depth perception can be a little off, causing a misplaced jump to rob you of a precious life. The checkpoints are few and far between in some areas, which can lead to frustration. Also, there are some bugs here and there. I got stuck on an island at one point and no matter where I moved, Hans the big human hand would appear and drop me back. I had to fast travel to fix it.

The biggest positive addition to Rehydrated, though, is the new Horde Mode multiplayer. It’s a classic wave-based mode that takes place across a range of small, colourful arenas and introduces playable characters not in the main story like Squidward and Mr. Krabs. It’s just a really fun addition to get kids and their siblings or parents playing together. It’s handled pretty well, too: with a lot going on at any given time you’d expect the screen to get a little crowded, but it maintains a decent balance. It’s not essential to the rest of the experience, so it’s nice that Purple Lamp have included it at all.

Spongebob Squarepants: Battle for Bikini Bottom Rehydrated is a masterful re-up of a genuinely fun game. If you didn’t know about the original I really don’t think there’s much here to suggest it’s a remaster of an old game. It looks so shiny and modern and plays so fluidly, that it will appeal as much to the gamers of today as to those who fondly remember playing it as a kid all those years ago.

Looks lovely
The gameplay has aged well
Spongebob is great

Spongebob Squarepants: Battle for Bikini Bottom Rehydrated is a masterful re-up of a genuinely fun game that will appeal to old fans and newcomers alike.

You may also like
NickelodeonSpongebob Squarepants: Battle for Bikini BottomPC