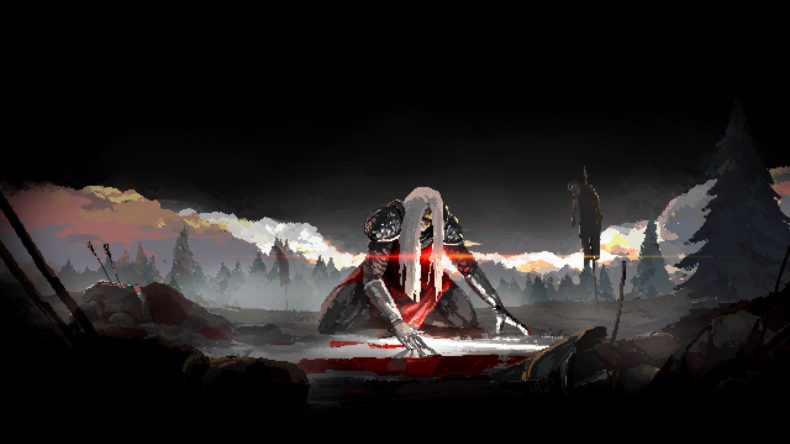 When I previewed Moonscars a while back I was quite smitten. The story confused the pants off me, but the feel of the combat combined with the intriguing art style had me hungry for more. After now spending many more hours with Black Mermaid’s 2D Soulslike Metroidvania, it’s fair to say that some of the magic has worn off.

Those who seek a stiff challenge above all else will be comfortable here. Moonscars is a difficult game, repeatedly punishing the slightest mistake with the removal of buffs and bonuses, and forcing you to carry a lot of bone powder – the game’s currency – around with you until you can level up one of your skills, or “witcheries”.

You play Grey Irma, a clayborne warrior created by the Sculptor. These warriors are able to pour their life force, known as Ichor, into clay bodies and essentially live forever. When one vessel is ruined, they adopt another. Exactly why this happens is slowly explained in snatches of flavour text and almost obnoxiously cryptic dialogue, and even after so many hours with multiple versions of the game I’m not sure I fully understand the backstory or world. Characters come and go, alluding to histories that aren’t fully explored, and some of the dialogue is cumbersome to read. 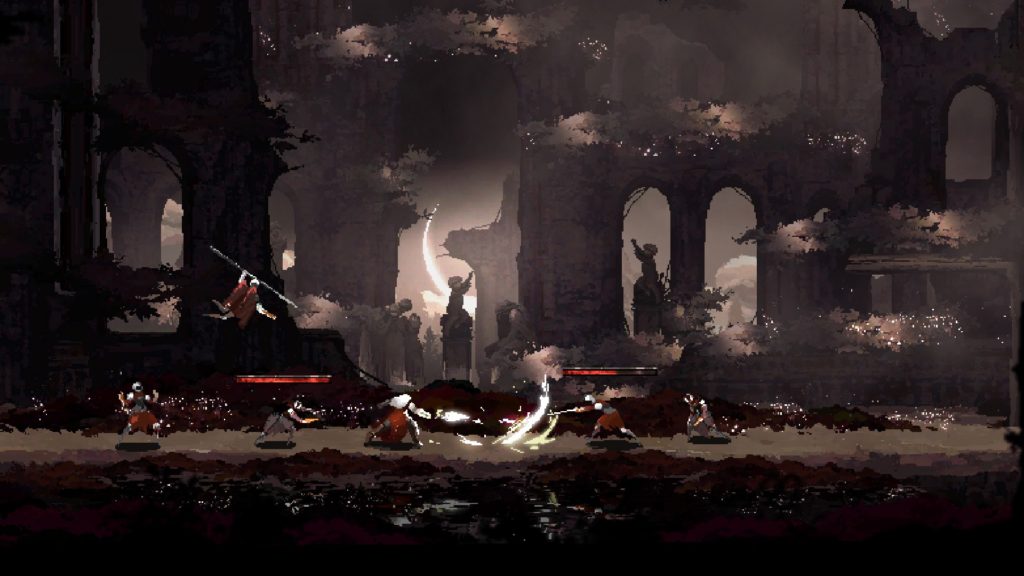 Thankfully, the gameplay balances many of these issues – although does bring around some issues of its own. It’s a 2D game, and enemies will attack Irma from both directions and above at the same time. Sometimes their movements will align to such a degree that you won’t sure if you’re facing two enemies or four, and as combat relies so heavily on a parry mechanic, this quickly becomes frustrating.

Pressing the right bumper causes Irma to shoulder bump an enemy and follow up with a devastating counter. It looks and feels amazing when you nail it, but the window is tiny. When facing one enemy, it’s not so bad, but when two or three attack at once or from a both sides, the parry is almost useless. A red flash appears when an enemy is attacking, and it’s this flash that causes the issue. In the preview build I’m sure the parry window was more generous, as you could hit parry as soon as the flash appeared and perform a counter. Now, you have to wait until a split second after the flash happens, as it fades back down, and it varies slightly by enemy. 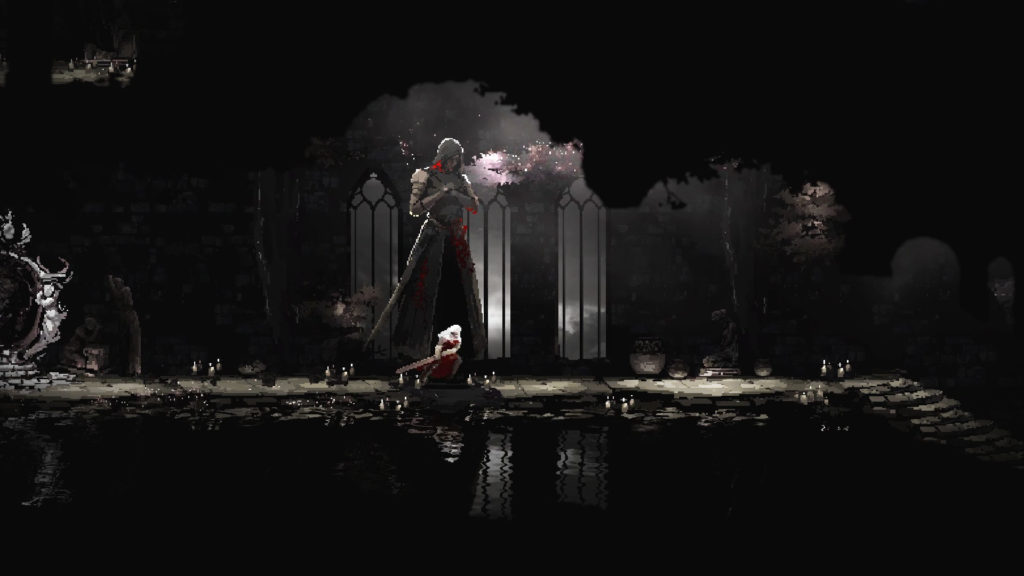 As enemies have different wind ups, cooldowns, effective range, and speed, working out the correct timing for each can be difficult. I actually feel it would be an easier thing to read without the flash, although then it would be hard to spot when an enemy was attacking at all in some areas. Moonscars is incredibly dark, the sepia-toned scenery shot through here and there with shocks of stark red and moody black. It’s effective for creating atmosphere, but can make it hard to track what’s happening during fights when you’re dashing, parrying, attacking, and using witcheries against multiple attackers.

Fast travel is available from Dark Mirrors, which also allow you to travel to the Sculptor’s Moonforsaken Workshop. Here you can chat to NPCs you’ve met along the way and attempt to make sense of the story. You can buy and sell items such as Amulets which apply permanent buffs, and upon leaving will choose a secondary weapon. These weapons include a long spear, a huge greatsword, and a jagged pinwheel, and can do massive damage to enemies. They have a big wind-up but no cooldown and can often save your clay in a pinch. 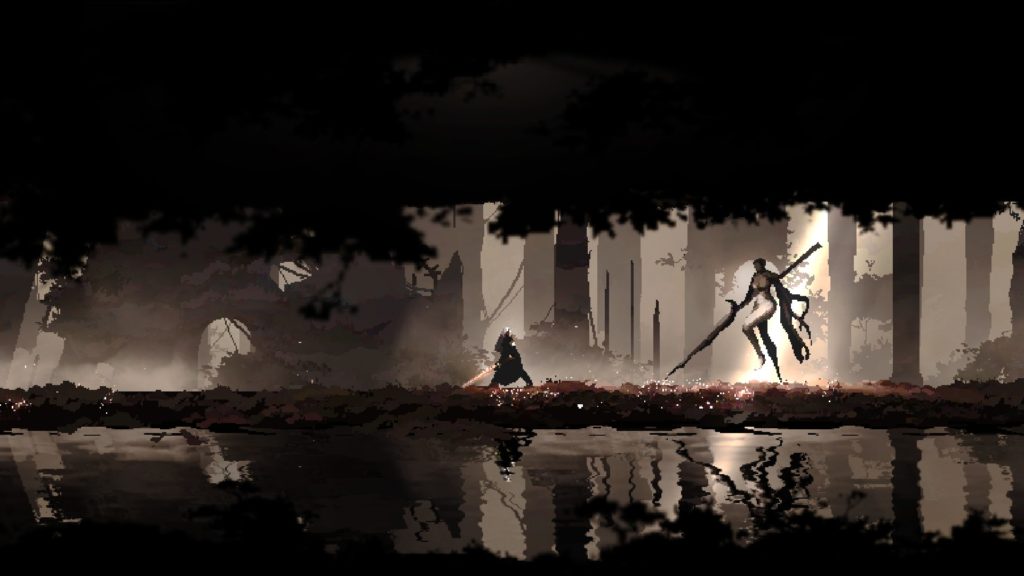 Navigation is handled with the usual combination of jumping, wall-bouncing, and dashing to cross gaps or avoid spikes and other hazards. Unlocking Irma’s witcheries and finding keys allows you to reach previously impassable areas, and exploration is encouraged and often rewarded with new amulets and bone powder.

Returning to the Workshop unlocks the origin Mirror for fast travel, but it causes Irma to abandon her current vessel. This removes the buffs you’ve gained by earning Spite, a transient currency rewarded for killing your corrupted clayborne enemies, referred to as the “cleft”. Everything else, such as witcheries and healing, costs Ichor to cast, which also builds upon killing enemies. When you abandon your vessel, your corrupted Ichor reanimates it, and you must battle yourself when you return from the workshop. 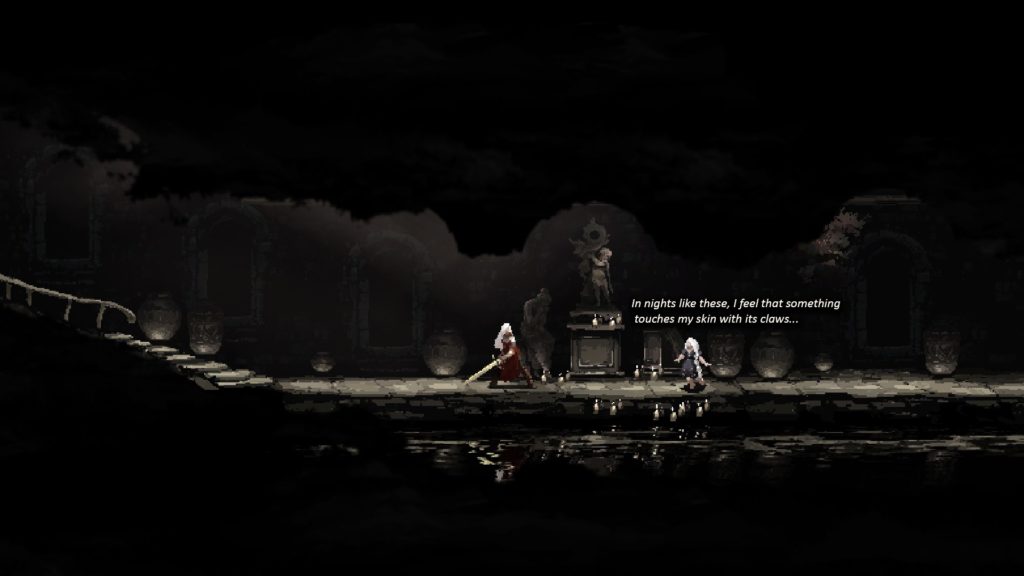 On top of this, Irma’s clayborne hunger grows with the phases of the moon, which becomes red and angry when you die. This increases the damage done by enemies and strengthens their defence, but rewards you with more bone powder. Skilled, dedicated players can earn powder much faster by not returning to the workshop and making use of Irma’s “moonhunger”. It’s as confusing as it sounds at first, but begins to make sense after a while.

Ultimately, Moonscars is a victim of its own obtuseness. There’s a very good game in here, but it’s bogged down by nonsensical waffle and too many mechanics and currencies. The combat feels great when it clicks, and exploring the world is as rewarding as it is dangerous, but it’s a difficult game to fully enjoy. Moonscars is an intentionally bleak adventure in a grim, unforgiving world, but players who seek a genuine challenge will certainly find it here.

Moonscars is an intentionally bleak adventure in an unforgiving world, but players who seek a genuine challenge will certainly find it here.