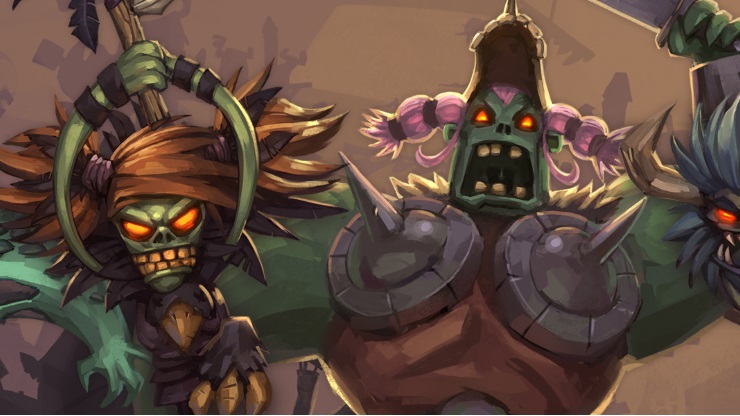 It takes a while to get in to Zombie Vikings, and not just from an enjoyment point of view; it literally takes a while to get in to. Several minutes are spent smashing your way through crates, listening to terribly funny (no, actually it’s just terrible) dialogue before a single enemy is encountered. This seems odd for a genre of game that is renowned for being a reliable bastion of quick, pick-up-and-play entertainment. Taking time to get in to the action feels like a misstep from the start.

Developed by Zoink! (they who made Stick it to the Man), Zombie Vikings is a simple 2D side-scrolling beat-em-up. The premise is a straightforward one: Loki, the trickster God of Norse mythology has stolen Odin’s eye. Thor and the other Gods of Asgard are too busy partying to help and so the now completely blind Odin makes a desperate move to rescue his eye by summoning some of legend’s most fearsome Vikings from the dead.

What follows is a trip through various arenas, accompanied by pop culture references in the whip-quick dialogue. Our four un-dead heroes are Gunborg, a huge Scandanavian battleaxe, Seagurd, an old sea-fearing pirate inexplicably fused with an octopus, Hedgy who vomits skulls that are actually bombs and Caw-kaa, a woman raised by crows. Each Viking has their own unique special moves; for example Caw-kaa’s move allows her to swoop down onto enemies to inflict large amounts of damage. Gunborg, the undead walking tank, can inflate her muscles to such an extent that she explodes causing damage to all enemies in her vicinity, but also damaging herself in the process. Seagurd uses his symbiote octopus to spit ink at enemies or throw them across the map. All of the moves are fun to use, but take a little time to charge up, and at times the amount of enemies swarming you makes this difficult. Certain Vikings are required to be able to complete specific levels, which allows players to experience how each one handles.

Combat for the most part is straightforward, with a normal and hard attack and two special moves for each character. Veterans of this genre will quickly find their rhythm, timing blocks and counters with ease. The key is to find space to execute your powerful special moves.

Like most games of this type, Zombie Vikings is best played with another person. Playing the single player is perfectly possible, but it does become a bit of a chore. The characters don’t appear to have any core statistics; there is no leveling, you are not fighting for experience points, merely hacking and slashing your way through each area to amass coins to purchase weapons that are more there for aesthetics than practicality. Some weapons can be won in side-quests which do appear to have additional perks – a cat on a stick, for example, that will lash out it’s claws at enemies from time to time. Runes do add a further dimension, and playing with an additional person brings some tactics in to play. Runes can increase the potency of your zombie vomit, or increase your health or improve your regeneration over time. There are even runes that are specific to each character. The lack of character leveling feels like a mistake. There is no driver to replay levels as your character’s strength will not improve with repeat play. The only marker of your progress is the amount of coins you earn, but you do not keep these if the end of level boss kills you and you have to start back at a checkpoint. This has the effect of making the die, repeat, die element more tedious than joyful, more pointless than purposeful.

Playing with another person is both cooperative and competitive. Players work together to take down enemies and collect coins. At the end of a level a score counter details damage dealt, enemies killed and coins amassed with a “winner” for that level announced. At the conclusion of a side-quest there is also a duel to win the specific weapon reward. Both of these make for good bragging rights among your friends.

It’s clear that humour has been a design feature in the game, with both the character animation and the dialogue aiming for the laughs. The dialogue feels a little hit and miss with some genuinely groan-inducing lines at times – “I’m going to put this on Instagram with a really bad filter” an early Boss shouts. It’s a wonder that the characters’ eyes don’t roll so far back in to their heads that they fall out, I know mine nearly did. Thankfully, the cardboard cut-out characters are animated beautifully. Seagurd in particular is a lot of fun to play, his character skipping through the levels with what can only be described as gay abandon, his octopus appendage swaying in the breeze. Zombie Vikings is a fun, if unremarkable addition to the 2D beat-em-up stable. It has four distinct characters to learn and master with the roles of each becoming apparent the more you play. It is a shame that the game doesn’t really lend itself to the lone player, however cooperative play definitely lifts the game from blandness and the quest for more ridiculous weapons is enough to keep you playing through to the conclusion.

The dialogue, while cringe-worthy, is amusing in its naffness, and it’s clear that Zoink have had a lot of fun creating the environments and characters you encounter. It won’t become a classic in the way that some recent iterations of this genre have – Castle Crashers, for example – which is partly down to the lack of any real character progression, but it’s certainly a game to while away a few hours heckling your buddies for their lack of button-mashing prowess.

A fun, but unremarkable beat-em-up, best enjoyed with a group of friends.