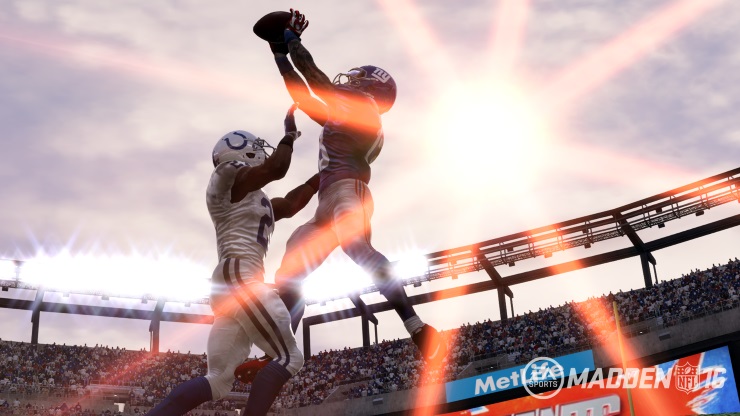 Ultimate Team is the premier game mode in almost all of the EA sports titles, but for those first few hours where you are forced to play with a makeshift team of poor players, it always feels like a grind just to get a better team, and lacks the enjoyment factor. In Madden NFL 16 a solution has finally been found to that issue, and it comes in the form of the new Draft Champions mode.

While Draft Champions was initially billed as the mode for fantasy football fans, it can be seen as more of an Ultimate Team-light, and perhaps not the mode fantasy football fans wanted. It gives you 15 draft rounds where you select one of three players to add to your randomly generated base squad. You never know what players will pop up in any given round, so you frequently come up with tough decisions such as whether to pass on a decent but not top quality QB such as Eli Manning (in hope that a better option pops up down the line), or to take him and hope Aaron Rodgers doesn’t then become available. Once your team is ready to go you are set free to play up to four games (three against the CPU) with your squad. A loss will result in your run being over and having to draft a new team, but the more wins you get the better the reward at the end. Once your run is over, you will be given some form of reward, which is usually a pack for the Ultimate Team mode. This means that after putting in a few hours work into Draft Champions, you will already have a decent MUT squad and won’t have those first few hours to put up with. Ultimate Team mode remains what you would expect otherwise, and is still the one many people will exclusively play. There are only minor changes compared to last year’s outing, but as everything worked well last time out that isn’t an issue.

On the other hand, Franchise Mode has been significantly improved. You can still chose to play as a single custom or real player – or the more fun option of being the coach. Guiding your team through multiple seasons and winning as many titles as possible is still the goal but short term ones have also been added. Players and coaches will have season and weekly goals that will increase their skill and legacy rating, while there is also the addition of in-game drive goals such as ‘Don’t allow a passing TD’, or ‘Have Aaron Rodgers (you might have picked up I’m a Packers fan) complete four passes on this drive’. While there is no penalty for not completing them, they do offer significant rewards in terms of player XP and confidence. When struggling in a match I noticed that once I start to complete a few drive goals and weekly challenges things would turn my way as confidence goes up. That’s not to say it’s a surefire way to come-back but I certainly think it helped, as I landed a last play of the game 36 yard touch-down in week two, against the Seahawks to win 24-21. Other additions such as the handy free practise and the massively streamlined menu systems make Franchise Mode the most pleasant it has been for years.

On the field there have also been some new additions. On the offensive side when receiving a pass new options have been added that allow you to catch in an aggressive way (hold triangle), try and hold on to keep possession (hold cross), or position yourself to gain some yards after the catch (hold square). This finally makes Hail Mary plays and long adventurous passes a lot more likely to work thanks to the aggressive option, while the possession option makes scoring that third down conversion slightly easier. New passion options also allow for high and low throws to offer that extra strategic option on each play. The rest of the improvements on the field feel much more of a refinement to the core systems. The post play pileups and questionable physics are almost totally eradicated and players seem much more likely to brush off a weak one armed tackle then fly to the ground because of it. Obviously there are still some issues, especially around the line of scrimmage, with large amounts of players unnaturally piling into each other – but that is somewhat expected.

While there hasn’t been too many flagship changes on the field, there appears to be a lot of small AI improvements from both those on your team and against it. Opponent QBs seem to be more intelligent and react to situations better, while blockers on your team finally understand that waiting for the right moment to initiate contact is the ideal way to go, instead of just smashing into them at the first opportunity. There are some minor new additions to running backs to make the run game more viable and, of course, lots of new animations to make everything more realistic. While it’s still not 100% perfect, it is by far the best Madden has felt on the pitch in years. My biggest issue with Madden NFL 16 is the load times. Simply put: they are unacceptable. While they are an issue across the board, it is Draft Champions that really takes a while to get into, with loading times of more than a minute very common. Across every area of Madden there seems to be some form of long wait, whether it be loading into a game or waiting for your offense to take the pitch. It takes too long, too often, and becomes incredibly frustrating, as do the constant roster/tuning/other downloads that seem to pop up every time I would boot into the main menu.

There are issues in Madden 16, but ultimately the on-pitch action and the game modes on offer present what is easily the best Madden package of this generation so far. Draft Champions is not only a great mode on its own, but also removes the first irritating hours from MUT, which itself is still going strong. The changes to franchise mode make it easier to play and not the database crawl that it once was, and the new goals system offers more depth. The important thing is that Madden 16 is great fun and not at all frustrating to play. The load times are a big issue but are ultimately more of an inconvenience than anything.

The on-pitch action and the game modes on offer present what is easily the best Madden package of this generation so far.