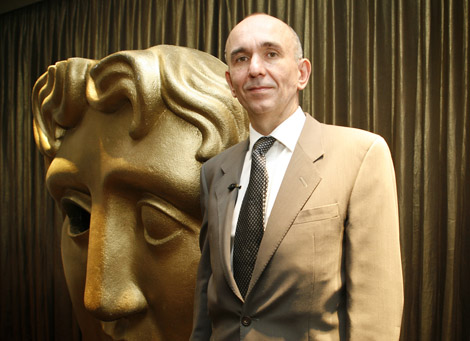 Last night in Piccadilly Peter Molyneux gave this years BAFTA video game lecture and the god is a geek team were there to soak up his wisdom and possibly obtain some information about Peter’s upcoming projects such as Natal and Fable 3.

The night started with a champagne reception and a  photo-shoot with Mr Molyneux (see: image) in the lovely BAFTA HQ. When we took our seat at the front of the auditorium in anticipation of the lecture, we were surprised to see the guys setting up Natal on the stage. At this point we suspected we may be up for a live viewing – and we were right. Video after the jump.

It was interesting to see natal in a slightly different way, my only previous experience with the new technology is the video of Milo released at E3 as well as videos of stage demo’s from various expo’s. We could see from the set-up that natal does not always read images correctly often clipping images, it made me think what if it doesn’t read my body properly when playing a game? It reminded me of the Wii motion plus waggle where you must hold the controller still to reset it in-between gameplay sequences and leaves me a little sceptical over motion controls.

Whilst natal was being set-up Peter had joined us in the auditorium giving me a look of “why are you in before the rest?” I shrugged it off and soon the rest of the press along with Aaron were allowed to join the god is a geek team.

Peter started the lecture by informing us he was giving us “the inspirational game industry speech” rather than “the game promotion speech” probably because Fable 3 and Natal are both in their infancy and a release is not imminent. Molyneux opened by talking about his previous games and went on to talk about the industry when he made his first game and the industry we have today, for more detail about his speech you can click here

After some inspirational talk we got a couple of key pieces of information:

Natal to feature in fable 3 – Peters exact words were “we (Lionhead) would be mad not to include some natal features in fable 3”. I would imagine natal will play a minor role in fable 3 as well as being an optional one. It did not sound like that feature had been put in or even written up yet so there is no guarantee we will see it in the final game but I imagine we would.

Fable 3 to use micro transactions – Another feature for Fable 3 that Peter mentioned was micro transactions, Mr Molyneux explained he likes to give players items as early as possible to reward them but felt that some times making it harder to obtain an item made it more valuable. Peter told us he would like an online store in the next Fable that would offer upgrades such as armour and weapons which can be purchased using Microsoft points.

Micro transactions can be found in many games today with Need For Speed:Shift being the latest example allowing players to purchase cars and upgrades with Microsoft points instead of in game currency. Micro transactions that offer upgrades which should really be obtained through gameplay are the work of the devil in my opinion, allowing players access to powerful in game items for money is against the spirit of gaming and is just another way to leach more money out of the consumer.

Micro transactions are not all bad though, a good example of micro transaction is battlefield heroes. Battlefield Heroes is a free online 3rd person shooter from EA, the game can be played on the PC without a penny being spent but if you wish to add weapons, clothes and accessories to your hero you will need to make some purchases which is fine because the game is free to begin with!

What are your views on motion controls and micro transactions? Please feel free to comment and start the debate.

Nowadays I have my own cash and own all of the major consoles and a top of the range gaming PC. Dropping a grand to upgrade my PC is not a huge decision, it's a requirement! If you can't find me on the PS3 or 360 then I am probably on my PC playing the latest MMO, RTS or FPS.
MORE LIKE THIS
bullfrogGameplayGamesKojima