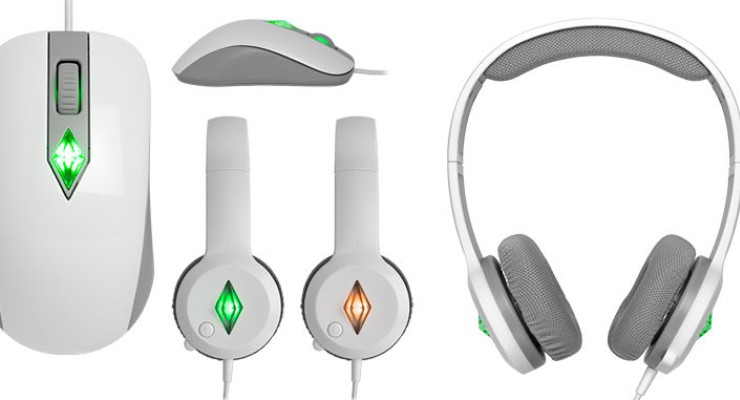 In a world of feature-rich headsets that cost hundreds of pounds and mice that have more buttons than is ever necessary, budget devices fail to gain much attention or love. At times this is rightly so as the general quality isn’t great, but The Sims 4 Headset and Mouse from SteelSeries does not need to be tarnished with the budget brush, as despite the price they are very competent devices. In the box, the Sims 4 headset looks like any other budget headset. The white plastic exterior and minimal head-rest padding give the device a fairly cheap and poor quality look, however once on your head these perceptions will quickly change.

The sound quality of the headset is phenomenal considering you can pick one up for under £30 if you shop around. After initially being shocked at just how clear the sound was I decided to push the device with a playlist that consisted of the likes of Five Finger Death Punch, Dizzee Rascal and Atomic Kitten. Amazingly, it handled everything I threw at it with ease and maintained great sound quality, even on bass heavy tracks.

While the sound quality is great the comfort level is less than spectacular. Those who don’t like Supra-aural (on ear) headphones are unlikely to be converted as the headset pushes in quite hard on each ear, this also makes it extremely uncomfortable for glasses users. However if you can put up with the on ear speakers and don’t have glasses you can wear the headset for a good few hours before it starts feeling uncomfortable.

One of the major selling points of the headset is the LED Plumbob on each side (that’s the iconic Sims diamond). When playing The Sims 4 these will light up depending on your sim’s mood, red for angry, green for elated, you get the general idea. While this is a neat feature that works well it does seem somewhat pointless as when you are wearing the device you can’t see the LED’s. Fortunately, if you download the management software, you can turn off the LED’s or further customize the colors if you wish. Located on the left side of the device is the microphone. Interestingly this is stuck in place and not movable, it is also strangely right next to the speaker and mute button. As the mic is close to the speaker it often picks up sound and when talking via VOIP this can cause a horrific echo. Pressing the mute button will also cause a considerable sound spike. To make matters worse the mic is of a very low quality, and shouldn’t be used for any type of recording, or voice chat if you want to keep your friends.

Being a USB device the headset is compatible with almost any PC or Mac. The cable is of a fairly decent length so will work with almost any set up and the light weight plastic build makes them extremely portable. The headset perhaps isn’t designed to be used as a gaming headset for regular PC gamers, but for casual The Sims fans or anyone looking for a cheap portable headset with good sound quality, it’s a solid option.

To accompany the headset, SteelSeries have created a Sims 4 mouse, which also features the iconic Plumbob. On the mouse the Plumbob takes the form of the DPI button just below the scroll wheel, and much like the headset the LED’s of the Plumbob (and scroll wheel) will match the emotion of your sim. Fortunately, on the mouse this is actually visible and remotely useful. With the customization software you can customize the LED as well as all the buttons functionality. Speaking of buttons the mouse features the standard left click, right click and scroll wheel along with the previously mentioned Plumbob DPI button. There are also two thumb buttons on the left hand side, which make this a mouse suited to right-handed gamers (although lefties won’t find it unconfutable). All of the buttons feature a nice resistance and have a satisfying click.

The shape of the mouse is similar to the SteelSeries Sensei, and thus mostly suited to those with a palm grip. Holding the device feels very natural and fortunately claw-gripped users shouldn’t have a massive issue with it either. The plastic material can make the device quite slippery if you have sweaty hands and the white color makes dirt and grime stand out.

On the technical side of things the mouse features a 1600 DPI sensor; while it isn’t the highest out there, anyone looking for higher sensitivity probably won’t consider this mouse anyway. From my experience no clicks seem to be missed, even in fast-paced games such as Dota (a game that the mouse works surprisingly well with). One minor gripe is the cable, as it isn’t braided so lacks rigidity, which personally I prefer. No Sims player could go wrong with The Sims 4 Mouse from SteelSeries. It features all the functionality you could want, is nice and light and has the Plumbob function. A PC gamer on a budget could also do a lot worse but may as well go for a standard Sensei mouse instead.

Fans of The Sims 4 will no doubt snap up both devises and be perfectly happy. The headset features incredible sound quality for a budget device (I plan on using it as a music headset to accompany my MacBook Air,) but the design can be uncomfortable for some users, especially after a long period of constant use and the mic isn’t up to scratch either. The mouse on the other hand is a much more rounded device, as it’s functional and comfy to use. The extra thumb buttons are always a nice addition to a mouse and here the Plumbob makes sense. As a combined pair of budget devices The Sims 4 SteelSeries mouse and headset is a great choice for Sims fans,and even those who don’t play the game will find them usable and functional.

eSports! I joined God is a Geek all the way back in September 2013 and since then have spent most of my time on Dota 2, and occasionally posting the odd review, news article or totally wrong predictions for The International. When I am not playing Dota I can probably be seen watching some kind of strange eSport or begging for more Twitter followers (@MikeStubbsy if you are interested). Aside from GiaG I am a computing student, football coach and major Apple fanboy.
MORE LIKE THIS
SteelSeries