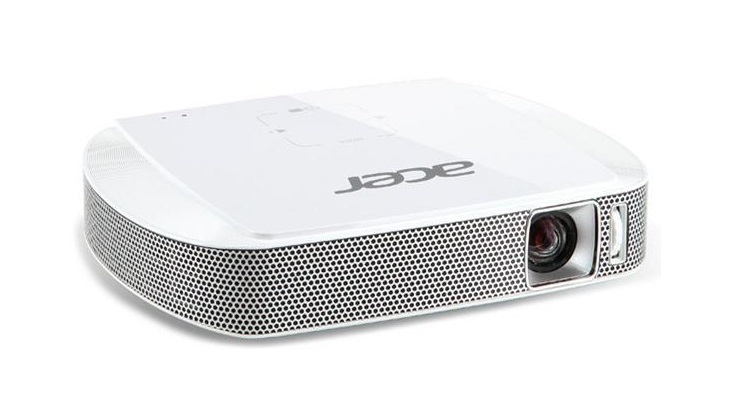 The Acer C205’s main selling point is its size. A lightweight, incredibly small projector, the C205 is designed to be used by business people for delivering presentations in rooms where there is no existing screen.

As you would expect from such portability, the C205 is very easy to set up. A HDMI/MHL inlet sits on the rear of the unit alongside a power socket, and all the necessary wires are included in the box. Connect those two and you’re immediately away, with a two hour battery pack also included to help you set up literally anywhere.

So straight-forward is the C205, that there isn’t a whole lot to fiddle about with once you have it set up. Four touch sensitive buttons on the top of the unit allow you to change the brightness (bright, standard, and eco), adjust the volume, and hide the image – while a focus ring sits next to the bulb. Image size depends on the distance between the unit and the wall (or screen), with a five foot distance correlating to an impressive four foot display. However, on larger screens the text becomes pixelated, and while you can reduce the focus to take the edge off, it makes background images far too blurry. It could be argued that the C205 is made for smaller rooms and smaller projections, thus resolving the pixilation issue, but even then the image is never quite perfect, and in closer confines the fan noise becomes a distraction. That said, the built-in speakers do a fine job of masking the noise, well ahead of most comparative projectors in audio quality and loudness.

The unit itself looks fairly smart, though, white plastic with a silver wrap-around grill for cooling. It’s professional, with a small bag to carry it around in. It should last a while as well, with an apparent lamp-life of 20,000 hours in standard mode (which, obviously, we couldn’t test).

In truth, it’s hard to recommend using the C205 for films or gaming, because the requirements of text and image quality are quite high. Yes, image quality looks just fine at 36” diagonal, but it isn’t as good as the similar sized TV in the next room, which is also a lot quieter, and if you’re into films or gaming chances are you already have a TV that size anyway.

For a presentation, mind, these issues aren’t a deal breaker, with its ease of use and battery option (as well as price point) overriding them. The bottom line is that text and graphs will look professional enough.

Review item provided by eBuyer.
Liked it? Take a second to support GodisaGeek.com on Patreon!

You can find me on Twitter and PSN as MacShanks, and feel free to hit me up if you have any questions, queries or feedback!
MORE LIKE THIS
Acer