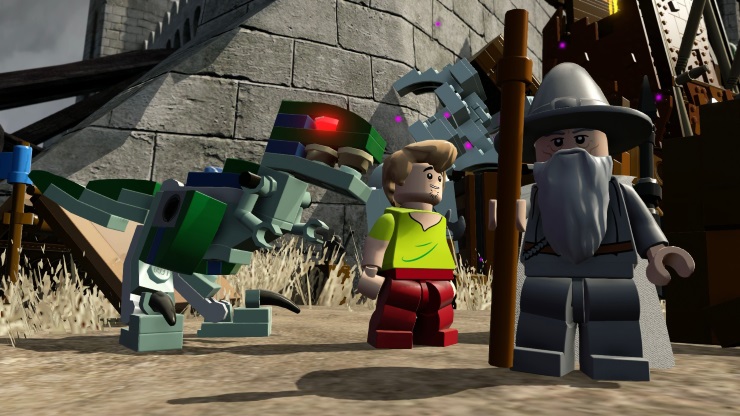 What do you get when Batman, Gandalf, and Wildstar head to Oz (as in the Wizard not Australia) then find themselves inside Aperture Laboratories and team up with the Scooby Doo guys? No it’s not the most incredible trip you have ever had, it is in fact LEGO Dimensions, Warner and TT Games’ entry into the toys to life genre.

Obviously the big selling point here is that all of the real life physical figures are LEGO, so for the characters they are mini-figures, and for the vehicles they are made out of bricks that can be rebuilt in multiple ways. Bringing them into the virtual world is the portal, where the figures can be placed to bring them to life. At the start of my demo, Batman, Wildstar, and Gandalf mini figures were on the portal, and by the end Chell from Portal had been added along with the Batmobile and The Mystery Machine.

Things started out in the land of Oz, where we encountered Dorothy and her chums before the wicked witch ruined the party and stared a mini boss battle (although not before a brilliant joke about Batman and the Scarecrow was thrown our way.) The boss battle required me to switch to Batman and throw a Batarang at the Witch on her broom to knock her down then pummel her with my fists, which was fairly easy. Once this fight concluded we headed to the hub area before jumping into Aperture Laboratories. And it’s there where my enjoyment levels went up. The jokes came faster (there was even a cake joke), the puzzles became harder (as you would expect from the Glados led facility), and cameo appearances from the likes of Homer Simpson showed just how large the character roster is going to be. It was just a lot of fun to see all these characters interact, and be funny at the same time.

That said, it’s the standard LEGO game style with puzzles to solve, studs to collect and platforming sections, though the puzzles have been reworked slightly to utilize the portal and mini-figures. One example is how physically moving a character from the left side of the portal to the right would make them smaller in game, and vice-versa. Another example assigned a colour to each section (top left and right) and at least one character had to be placed in each section so they could go to the colour coded area in game. While this sounds like a neat idea (and to be fair with the demo set up, it was!), my issue comes with the fact that you have to move physical objects relatively often. I know with my setup at home this would be annoying as I would have nowhere to rest the portal other than the floor (my sofa in uneven so the figures would fall off and thus out of the game.) As a result I would often have to drop the controller, reach down and move things around, which I feel like would become very annoying very quickly.

However that is ultimately a small issue that may even just affect me, in what was an incredibly entertaining experience. Seeing the characters from totally opposite ends of the cultural spectrum interact was incredibly entertaining and the LEGO humor was on-point as ever. The classic gameplay has seen some tweaks with the new portal interaction but the puzzles still remain fun and quite challenging (on more than a few occasions my demo presenter had to nudge me in the right direction.) The added bonus of being licensed LEGO figures and bricks makes this much more appealing than many of its competitors, and as a result I left the demo fearing for my wallet.

eSports! I joined God is a Geek all the way back in September 2013 and since then have spent most of my time on Dota 2, and occasionally posting the odd review, news article or totally wrong predictions for The International. When I am not playing Dota I can probably be seen watching some kind of strange eSport or begging for more Twitter followers (@MikeStubbsy if you are interested). Aside from GiaG I am a computing student, football coach and major Apple fanboy.
MORE LIKE THIS
LEGO DimensionsTT Gameswarner bros