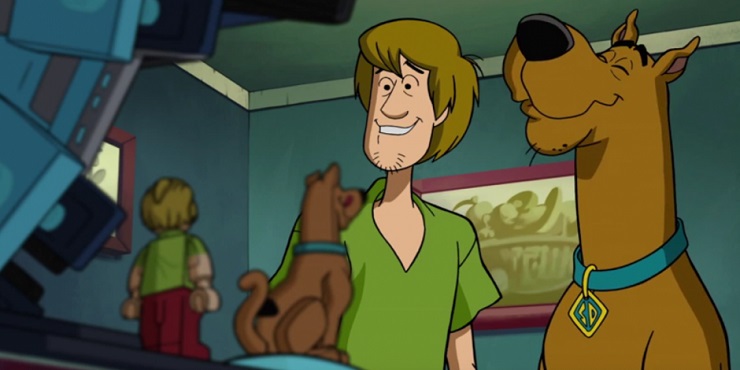 As if LEGO Dimensions wasn’t already looking like it has the potential to be the greatest game ever, Warner Bros. Interactive has released a brand new trailer featuring Scooby-Doo, Shaggy and the Mystery Machine in action. Starting and ending with an original Scooby-Doo cartoon short, the trailer also gives us tons of new gameplay footage including Scooby and Shaggy, as well as a majority of other characters and worlds from the previously-announced franchises, including Batman, Ghostbusters  and The Simpsons. There will be a complete, mission-based Scooby-Doo level included in the starter pack, which was revealed to be one of the 14 main missions incorporated into the story.

When the game is released, you’ll also be able to buy an exclusive LEGO Dimensions Scooby-Doo team pack, which features Scooby-Doo and Shaggy minifigures, a LEGO Mystery Machine and a LEGO Scooby Snack. Using any of the team pack’s items on the LEGO toy pad will open up the Scooby-Doo Adventure World, an open-world environment where you’ll be able to interact with plenty of Scooby-related locations and puzzles that are completely separate from the main story.

The key focus of LEGO Dimensions is interchanging various vehicles, minifigures and gadgets throughout the game, allowing you to use anything anywhere. The trailer shows off a lot more of this way of thinking, with the Mystery Machine driving through The Simpsons living room, but just imagine taking Homer Simpson to Middle Earth whilst driving the Ecto-1 from Ghostbusters, or running around the TARDIS as the Batman!

LEGO Dimensions is released on September 27 in the US and September 29 in Europe for Playstation3, Playstation 4, Xbox 360, Xbox One and the Wii U. Take a minute, breathe and then watch the Scooby-Doo trailer below:

Video games are cool. Don't let anybody tell you any different.
MORE LIKE THIS
LEGO DimensionsplaystationScooby-DooWii U