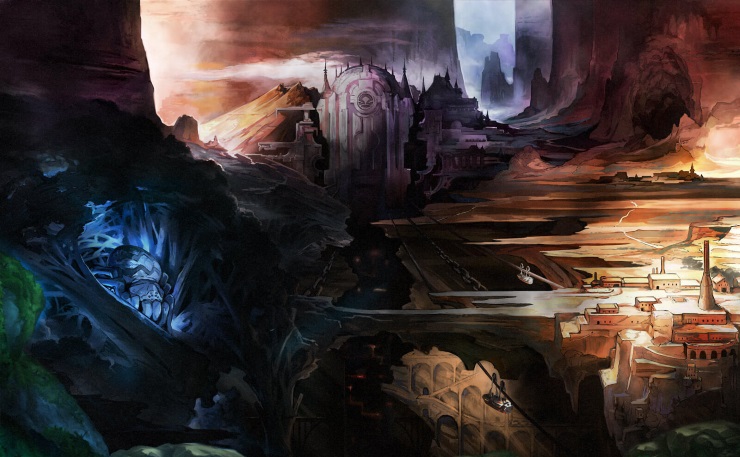 My encounter with Zodiac began with a tea and a snoring dog. I was disturbed from the canine hypnosis when Jean Baptiste Fleury (JB, as he said we could call him), welcomed me to see Kobojo’s new game, Zodiac: Orcanon Odyssey. I was introduced to the game with an animation that would be common in an 80’s anime, which is a good thing! The entire game from what I saw is a moving comic or manga, with ludicrous designs that feel at home in a Japanese animation studio, but it breaths with morphing 2D graphics that make it more pleasing to the eye than most 3D games.

JB said that the team “Focused on the graphical animation. It’s not going to be a small game, but we have limited memory and so on is our everyday problem. Most 3d games you can turn around and get close up but it’s not as beautiful, and we can put in so much more detail with a 2d game.”

“In JRPG’s, the story is conveyed in cut-scenes. We found a Japanese studio who would animate it like an anime, and there would be twenty to thirty cut scenes like this. Another method would be motion design cut-scenes where we take a static picture, and zoom in and out.”

The game is also lavished with the music of Hitoshi Sakimoto, who has worked titles such as Final Fantasy XII and Final Fantasy tactics. “We had him watch each level and then come up with a score for it, so the music matches the scene.”

The story, written by Final Fantasy VII: Advent Children veteran Kazushige Hojima, starts off simply with a mission given to you by the Queen, which takes you to a prison where you find things aren’t what they seem when the world goes to hell. We journeyed through the depths of a steam punk prison to a jungle world populated by the morphing sprites of fish people. There we battled, using our IPad to bludgeon a bird behemoth with our Griffin-mobile and gave a mushroom monster a good thrashing. JB called it “simple, touch-based, intuitive.”

The combat brought back memories of the old flash game “Swords and sandals”, pressing an attack icon bubble that floated in front of the protagonist. For those of you who don’t remember, South Park’s Stick of Truth sported the same mechanic. JB said that this method of combat was a way that “could be easily adapted to a port to a console or another and handheld console.” Combat in a JRPG usually isn’t a particularly ground-breaking feature; however, Zodiac has a particularly impressive tempo to the fights. The boss battles were most of all challenging, which is a rarity in today’s games – my Brutish knight smiting the enemy to lower his HP only by a pixels’ width brought desperation to the engagement. “There will be twelve jobs or classes and they will be unlocked throughout the game,” JB told me. “You will start off with the regular fighter class but you will be able to unlock more. Based on the zodiac signs, each have their own elemental power: you have alchemists who can hurl fire and others who can use elemental skills like earth, water and air, etc. Even during a fight we want you to be able to switch classes so that as one class you can stun the enemy, then change into a heavier damage-dealing class.”

The French company Kobojo is an eight-year-old company that in the past focused on free to play games. However, JB explained that two years ago Mario Rizzo the CEO of the company dramatically said, “I have a dream.” The man wanted a JRPG on mobile! “We first set out to make a free to play game, we’re skilled to make free to play games, but we had to make it premium. Free to plays can be beautiful, only making games that you pay for what you want, but we tested with the audience and they reacted very strongly and negatively to it being a free to play game, so we made it premium. We also reflected on the pacing of the game and we realised we couldn’t feasibly use a free to play model. We will be adding more to the game over time as well, such as DLC that will add more to the story. At the moment we look at the game like it’s Season One, and then in time we may add another season, so we’ll be adding more and more content.” “It’s hard to find a good quality RPG game on mobile,” JB continues. “For instance, you have some games that are ported brutally and they don’t work as well and are not fun, they are not adapted to the mobile. Or you have other games where they are only partly an RPG and they focus more on the combat, so we wanted to focus all on the characteristic features of those games, exploration, puzzle solving etc.”

However, making a good JRPG is a challenge, and a mobile game even more so. There are plans to port over to console, but the IOS release will be the first taste of this game, and as many of us who know about games understand, what’s popular in Japan isn’t necessarily popular elsewhere. Let’s hope Kobojo can pull it off.