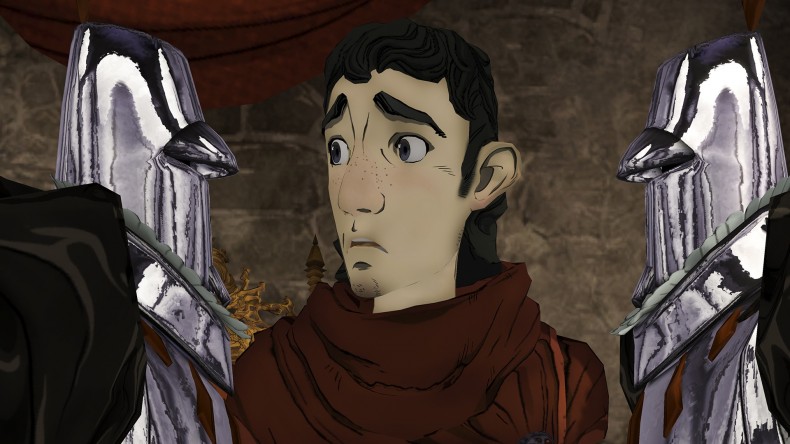 There are some remakes you quietly pray for year after year, knowing they’ll probably never happen but wishing anyway because, well, it can’t hurt, can it? While I’ve almost given up on Fear Effect or Suikoden, two games I’ve been dying to see modernised are Simon the Sorcerer (now finally in development), and King’s Quest. Roberta Williams’ beloved adventure series first came into the world way, way back in 1984, and many questioned whether or not it would even find an audience in this day and age. Modern games don’t often lean heavily on the whimsical, and that which is twee rarely lasts long.

Against some considerably stacked odds, new developer The Odd Gentleman managed to achieve a rather incredible feat by not only doing the source material justice, but also truly bringing it bang up to date. The first episode of their King’s Quest revival is beautifully, lovingly made, laced with humour both dark and cheery, and utterly brimming with the kind of Pratchett-esque charm hardly seen in games since the glory days of the Point ‘n’ Click adventure.

The first Chapter, A Knight to Remember, captures the essence of the original release, returning us to the feudal kingdom of Daventry with a bang as we help guide Graham, the man who would be King, on his initial journey towards grand adventure and, ultimately, the throne. That we already know Graham becomes King does nothing to hamper the storytelling, because the rise from would-be Knight to Sovereign is so packed with the unexpected, and the writing is so effortlessly entertaining. Presented as a story told by an elderly Graham to his great grand-daughter, the plot bends to your choices in subtle ways (there’s no Renegade or Paragon path here, for example; you can only play Graham as the hapless hero that he is), and sets the scene for the protagonist’s titular kingly quest.

The most surprising thing about the remake is how playable it is. Comparatively slow when juxtaposed beside the majority of today’s blockbusters, it nevertheless manages to keep you engaged, not just with its fairytale art-style but with environmental puzzles that challenge rather than frustrate. It’s never overly difficult or taxing, and it’s hard to put down as a result. Cleverly, very few of the puzzles have a single solution, and, while it’s not entirely free-form, you are able to experiment and think your way around conundrums without having to focus all your efforts on the one true answer.

King’s Quest:  was a wonderful surprise for 2015, reminding us that you don’t always need explosions and AAA flash to make an excellent adventure game. The Point ‘n’ Click genre has evolved in recent years to become a much more cinematic and expressive medium, and it’s nice to see a developer like The Odd Gentlemen take such pains to remain faithful to the thirty-year-old source material while still producing a game that feels modern and fun. Their reboot of this seminal classic is certainly one of this year’s biggest and most welcome surprises.

Senior Content Editor Mick has been playing games for over 30 years and writing about them for around 12. After drifting from site to site for a while, settling briefly at the now-defunct Made2Game and freelancing for the gone-but-not-forgotten NintendoGamer Magazine, he came at last to rest at Godisageek. Mick has been a reviewer, staff writer and content editor here for some time, while also moonlighting a little for Red Bull Games. He has 4 kids, has written 2 novels, and sometimes even manages to pay a bill or two. You'll usually find him defending the galaxy in Destiny 2, battling evil in Diablo 3, or lurking in the background on Twitter. Find him there @Jedi_Beats_Tank, or on XBL (JediWaster247), PSN (Jedi_Waster) or Nintendo (JediWaster).
MORE LIKE THIS
goty2015the odd gentlemen