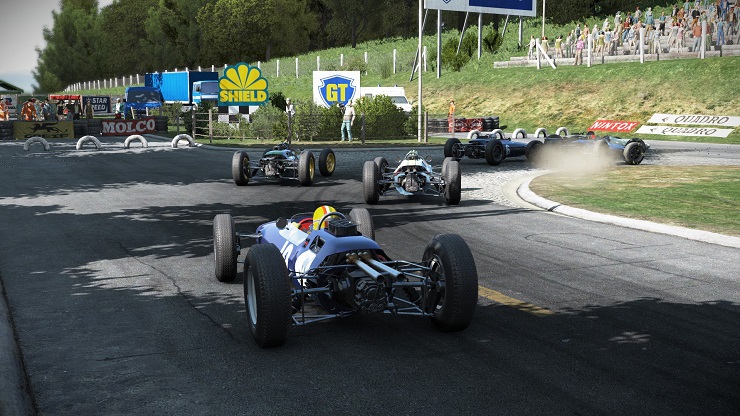 Racing sims – true, thoroughbred racing sims – have always struggled to be fun. Tinkering minutely under the hood, adjusting brake bias, tyre pressures or the firmness of the ride, it all sounds a little bit, well, anoraky for your regular gamer, and traditionally they’ve not been helped by the on track action – if you can call it that. Lap after lap after lap round a track, shaving fractions of a second off your time as you inch towards the car ahead, it hardly sets your pulse racing, leaving sims a niche market – enjoyed immensely, but only by a few.

Project CARS changed this. Excellent on track action – with aggressive, fallible AI and a handling model that could accurately reflect different disciplines – was matched with proper, in-depth tuning options, arguably for the first time; blowing away the likes of Gran Turismo, where the AI sticks firmly to the racing line, no matter what. Here, computer racers happily run you off track, aggressively try to out-brake you into corners and weave to get you out of their slipstream. Happily though, they’re also capable of completely cocking-up, from a snagged gear change off the line through to running off track, even spinning if a tyre touches a slippery curb. They’re some of the most realistic AI racers I’ve ever seen.

With the variety of disciplines came real options too. Want to chart an entire career for your driver, working your way up from the bottom? Well, the Karting is for you, but if you want to start at GT3 or Formula A, you can, Slightly Mad Studios deciding not to lock players out of any content from the off. Fleshed out with one off invitational events, CARS has one of the best career modes in any racer, free from the schlocky narratives that plagued Need for Speed and its ilk this year.

It says everything, I think, that Project CARS can be praised so highly before we even get the bread and butter of a racer: the circuits and cars themselves. With over a 100 tracks, there’s always a new challenge to tackle, and, while I did think the car list was a little light in my review, the fact that there is such a diverse range of handling models on offer means that the cars actually feel different from each other. Such having the full GT3 line-up would be cool, but by their very nature they’d all be the same, so only a handful are present in CARS, with the space left filled with classic Lotus F1 cars, Touring cars and Go-Karts. That variety could never be a bad thing.

For car lovers Project CARS is hard to fault – hell, it was built by car lovers. The racing genre is packed with gimmicks that developers feel the need to force in, be they Need for Speed’s FMV sections or The Crew’s attempt to become a MMO, but CARS proves that pure racing still holds the biggest attraction. Learning the limits of your car, the track and yourself, tuning that until you become a winning machine, SMS created a sim that anyone can enjoy, and the best racing game of the year

You can find me on Twitter and PSN as MacShanks, and feel free to hit me up if you have any questions, queries or feedback!
MORE LIKE THIS
goty2015Project CARSSlightly Mad Games