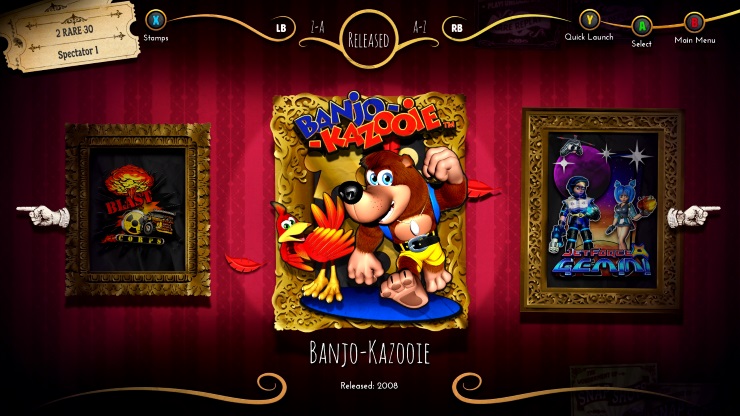 These days, the pre-fix “re” has become worryingly over-used. Remakes, reboots, remasters and re-releases are everywhere, on every current gen system, every month. Some would argue that most are Definitive Edition cash-cows released with a singular, monetary goal, and in many cases that’s absolutely true. In fact, it’s not often you see a re-release executed with the confidence and generosity of Rare’s Replay collection.

While the legendary developers opted not to go down the remaster route and optimise everything to 1080p (which simply wouldn’t have worked anyway), they instead re-introduced us to 30 – yes THIRTY – classic arcade and console games released over the last three decades in one single, glorious package. Frankly, it doesn’t need 1080p.

The magic is really in the selection as it stands: no tricks, no gimmicks (beyond that awesome opening musical number, of course). Any number of genres owe their current state to Rare in some form, and it’s easy to see why when you start flicking through Replay.

Chances are you won’t have played all of them. Chances are you still won’t play all of them even if you buy this collection, but that’s not the point. The point is that with such a vast array of games, there’re at least a handful of titles herein to appease any gamer. There’s more quality in the more recent titles of course, such as Perfect Dark Zero and Banjo-Kazooie: Nuts & Bolts, but for retro fans it’s a treasure trove, especially with largely forgotten gems like Digger T. Rock, a predecessor to titles like Steamworld Dig.

From Jetpack to Banjo-Kazooie via Viva Pinata and Snake, Rattle & Roll, Rare Replay showcases not only a brilliant selection of games, but the life’s work of one of the industry’s most prolific and well-loved developers. Had they been able to squeeze Goldeneye into the pot, too, it would have been truly stratospheric.

Proving that you don’t necessarily have to add a lick of HD paint to everything to show it off on today’s consoles, Replay hit us older gamers right in the feels and didn’t stop punching until we were exhausted. Younger players may have wondered what all the fuss was about, but my generation felt it, and we felt it bad.

Tying it all together in a box filled with fun factoids and genuine love, Rare gave us back a slice of our childhood we didn’t know we were missing. Not every game in the collection is gold, but there are enough shiny nuggets in there to make you forgive the odd rough-hewn lump of tin. Rare Replay is of the year’s best re-releases by a long shot.

Senior Content Editor Mick has been playing games for over 30 years and writing about them for around 12. After drifting from site to site for a while, settling briefly at the now-defunct Made2Game and freelancing for the gone-but-not-forgotten NintendoGamer Magazine, he came at last to rest at Godisageek. Mick has been a reviewer, staff writer and content editor here for some time, while also moonlighting a little for Red Bull Games. He has 4 kids, has written 2 novels, and sometimes even manages to pay a bill or two. You'll usually find him defending the galaxy in Destiny 2, battling evil in Diablo 3, or lurking in the background on Twitter. Find him there @Jedi_Beats_Tank, or on XBL (JediWaster247), PSN (Jedi_Waster) or Nintendo (JediWaster).
MORE LIKE THIS
goty2015Rarerare replay