previous
Here's a Step-by-Step Guide on Setting Up Your New Xbox One
random
next
Podcast 18/12: Giant Enemy Bae
0 comments

Best of 2015: Tales from the Borderlands 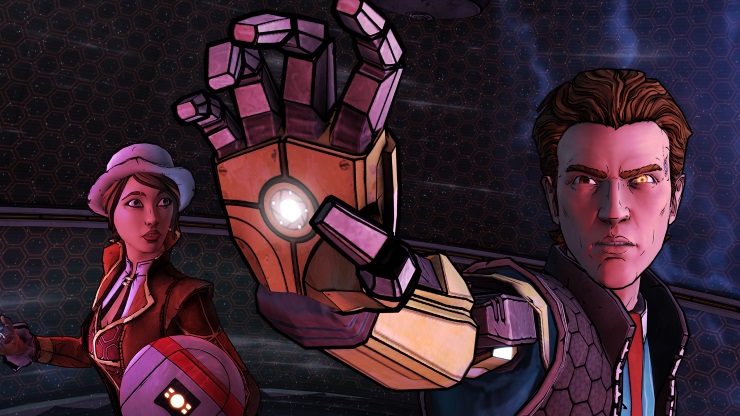 Public opinion on TellTale has dwindled somewhat over the last couple of years. The studio, who turns any franchise they can get their hands on into a point and click adventure, have lost a lot of the good will they first earned after the bleak and spectacular first season of The Walking Dead came to its fitting end. This is mostly due to the fact a lot of the games they’ve released since have been more reminiscent of the notorious Jurassic Park and Back to the Future games, rather than their grandstanding masterpiece that finally earned them prestige.

The criticisms aren’t without merit; Game of Thrones, one of two titles TellTale completed this year, was a massive disappointment as it took one of the largest, most intricate franchises in the world right now and told such a dull story with it, not to mention the awful squiggly lines that haunted the backdrop of every scene, hovering like an ominous presence above every character’s shoulder. Game of Thrones and TellTale should have been the perfect marriage, instead it ended in an accepting divorce. Release schedules are getting longer and more sporadic, and the stubborn refusal to improve an engine that runs worse than Emile Heskey was all too much for a lot of people, many of which jumped off the TellTale train altogether. Now, the same problems as outlined above can still be found in Tales. Episode one of Telltale’s five-part series set in the deadly world of vaults, vault hunters, corporate espionage, whacky monsters, massive guns, quirky villains and the best robots in anything, released way back in November 2014, and its conclusion wasn’t released for a further eleven months, and, naturally, the Tell Tale clunk, clank and drop was always present.

Despite this though, however, there is something more to Tales than the rest of Telltale’s back catalogue. There is charm, humour, and the rough edges of TellTale’s engine even start to blend in with the harsh, uneven world of Pandora, making the aforementioned rustiness actually feel at one with a world in which rockets are hastily put together with sheets of corrugated metal and car seats, rather than an annoying breaker of immersion.

Tales follows the stories of Fiona, a loveable rogue con-artist, and Rhys, a corporate shill who at first is only motivated by wealth and status but soon, after much adversity and time sharing his head with a certain bad guy, grows into a person who, while still very much motivated by finding treasure in caves, does it not for himself but for, and with, those around him. This is captured perfectly by the series’ ending scene, in which both Rhys and Fiona climb the vault’s steps together and peer inside the shimmering chest. They, of course, are both driven by finding that chest and its contents, but in the end what is inside doesn’t really matter, as they’d both become better individuals on their journey, due in large to the company of each other – which is exactly why the scene cuts to black before the contents of the chest is revealed to us. Ultimately, it doesn’t really matter. The pair don’t partake on their journey alone, however, and the cast is littered with a breadth of brilliant characters, all of which are different and have their own motivations, agendas and problems. Not all of their issues, like Athena’s relationship with Janey Springs, needed to become a focus for an episode, but they simmer in the background, adding greater depth to a world that – prior to Tales – had only been interacted by shooting at it.

And this is TellTale’s greatest achievement with Tales: they managed to take a world that no one had any emotional attachment to in the slightest, a world in which no one cared for the story or for its people, and actually made us care, with a light hearted story that meshes with the already established universe, but one that also adds a lot of layers on top of it. In fact, they also used a lot of what was already established in the world to their own advantage, something they rarely, and poorly, do in their other work. The return of Handsome Jack, albeit not very surprising, allowed someone who hadn’t even played a Borderlands game before become a little bit more familiar with the world. Not to mention the fact that Jack was hilarious throughout.

Also, the fact that Tales had one of the single greatest reveals in games to date, at least for my money – one which in hindsight was so painstakingly obvious but I just didn’t see it coming in the absolute slightest. To those who have played it, I’m sure you’re nodding your head in agreement right now. On a more technical side of things, the voice acting, from the likes of Troy Baker, Laura Bailey, Nolan North, Patrick Warburton, Dameon Clarke, Ashley Johnson, Dave Fennoy and all the rest, was stellar throughout with some excellent performances that really sold each character, and the music that played during each episodes’ excellently shot opening credit scenes was picked perfectly, really setting the mood for the episode to come.

It’s hard to really go into why Tales is so good without ruining it completely and delving into the intricacies of the story (which now thinking about it are surprisingly numerous), so all I can say with complete assertiveness is that Tales from the Borderlands is absolutely worth your time, even if you jumped off the TellTale train miles back. With twists, turns, laughs and a couple of moments that may make you stand mouth agape, Tales of the Borderlands is one of 2015’s nicest surprises and is certainly one of the year’s best.