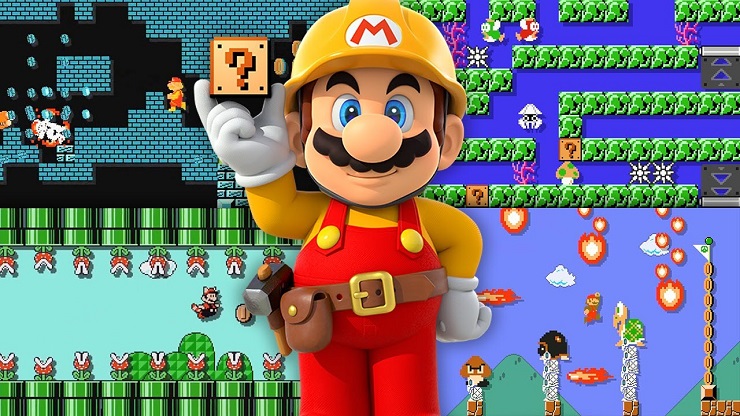 For Nintendo fans, 2015 has been a year of ups and downs. The Wii U has seen few releases – as has the Nintendo 3DS to be honest – but the titles that have been released by Nintendo themselves have mostly been of a high standard (Mario Tennis: Ultra Smash doesn’t exist, as far as we’re concerned). And then there was the tragic loss of Satoru Iwata, a man who arguably led Nintendo to their most successful years of the last two decades, and embodied the fun and friendly nature of the company’s games themselves.

How fitting it is that, for one of last games that he will to be credited as Executive Producer, it is one so full of joy, discovery, and above all else, fun. Super Mario Maker is an incredible tool, a blank canvas in which anyone can quickly and easily design the Mario levels of their dreams, and share them with the world. And it does all this in the most satisfying way possible.

Creating levels is as intuitive as drawing on the Gamepad, and even absolute newcomers can get up and running with levels in a few minutes. My wife and I have spent many an evening creating ever-more devious levels and watching each other play these devilish creations. In fact, making deliberately trollish levels for friends is almost a game in itself, as Adam and I have proven on many an occasion.

A lot of thought has clearly been put into how to make the process of designing a level as smile inducing as possible. In true Nintendo style, it’s the little things that become the most memorable: the way a strange voice says the name of the item you’re placing down, in the correct pitch for the current background music, the way the Gamepad is used in its most appropriate way yet, to quickly place items on a grid-based canvas and shaking an item when placing it, to slightly change its appearance or function. These are but a few of the many ways that make Mario maker such an incredibly engaging experience.

Some found fault with the drip-feeding of tools, as the whole inventory of level elements are doled over the course of a week long tutorial. However, these limitations meant that players are never overwhelmed, and are encouraged to get to know each set of tools as they arrive, as levels are unlocked to showcase the usage of each set of items.

And then you start to explore the levels that others create and upload to the Internet. Sure, there are bad levels out there, and a few too many levels that play themselves, but there are some genuinely impressive levels out there that can really surprise you, using the available tools in ways that you never would have imagined, while the ability to download these same levels and edit them to see how they work is such a great feature. Community functionality is so well implemented, with the ability to add Miiverse notes or a star to levels you like, and even see how many other players have failed in each level, as well as where.

With the 100 Mario Challenge offering a random selection of user-created levels each time, as well an always-improving hub for playing user-created levels, there is potentially no end to what you can experience with Super Mario Maker. It’s an incredibly versatile platform for Nintendo to showcase other Nintendo properties as well, thanks to some special event courses based on recently released games such as Triforce Heroes and Mario & Luigi: Paper Jam Bros., that unlock extra characters for use in your own levels. The amiibo integration also works incredibly well, allowing players to scan most of their collection in to unlock extra characters.

There’s only one real reason why Super Mario Maker belongs on the list of the best games of the year though, and that’s because we will never run out of Super Mario World levels. And that is something we should all celebrate.

A veteran GIAG member, I've been writing, talking and taping for the site since 2011
MORE LIKE THIS
goty2015nintendosuper mario maker