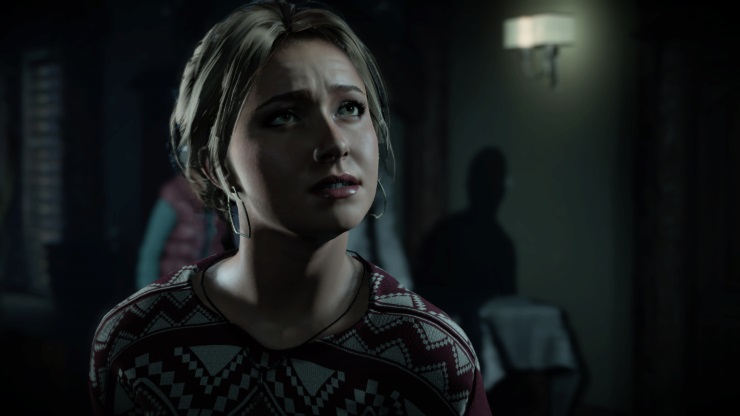 The torch beam moves around the clearing surrounded by the shadowy trees for the second time, looking to spot the source of the noise, even though the forest seems to be sucking all the power from the torch and therefore removing any reassurance I felt I had. The night has removed all of the colour from the woods; I’m even starting to think I’m seeing shadows when there are clearly none. The cold is biting through the layers I’m wearing. I don’t know how I’ll heat up ever again. I don’t have a gun, I’m freezing, I can’t run, and I know at some point I’ll bump into another threat. I’m not even sure I’m having fun anymore.

The uncertainty caused by the results of my previous decisions have muddled my judgement, and because I know I’ve caused deaths of innocents, I’m now second guessing everything I search, just in case it leads to me having to react quickly to survive. In short, I’m a bit of a tense and scared gaming mess.

Until Dawn has sideswiped so many of us since its release earlier in the year. Ingloriously swept under the rug in terms of hype because of its original roots and its previous shelving as a Playstation Move title, and sneaking out to a relatively quiet release due the rash of louder and brasher AAA titles, Until Dawn hid in the shadows, biding it’s time, slowly spreading through word of mouth like fear through a small group of teens stuck in the mountains.

I’m not going to argue with those who claim Until Dawn is an “I Know What You Did During Your Nightmare on Halloween Street When You Took a Wrong Turn, Part Five”. It does contain stereotypes from the outset: the Jock, the Nerd, the Blonde, the Geek Girl, the Bitchy One, the Caring One. While the dialogue is scripted and wonderfully acted out by the characters, Until Dawn puts you in control of the dialogue tree, so you’ll always feel like you’re having some kind of influence over who you control, and therefore you’ll be surprised how far you can pull someone away from preconceptions. This has the remarkably stealthy effect of making you care for the characters. They aren’t doing what they do because of who they are, but more because of who you are or who you want them to be.

If you lose someone (and there are no doubts that you probably will), the failure hurts more than it should. The wonderful Butterfly Effect mechanic means you can’t always know when something might happen due to how your decisions play out, so as you progress, every time you press Cross to check something there is an underlying tension.

This is where Until Dawn succeeds. Not in the obvious horror shoved in your face like Evil Within, but with the sweet absence that leaves your mind filling in the gaps. It knows you’re playing because you’re a fan of the genre, that you picked it up because you prefer a night in with Friday 13th than a romcom, it knows you’ll be expecting stereotypes and tropes and well-trodden locations.

So it ramps up the tension and plays with you every step of the way. The empty dark house and the journey into the cellar. The trek through the woods before finding a cabin no one with any sense would spend more than five minutes in. That dream where you are at your most vulnerable and something is out there, waiting.

The abandoned mine turns up with its friend claustrophobia in tow; the derelict hospital waits for you on the top of the hill. All expected in a typical horror story but then played out in unexpected ways. Unexpected because, while the scares are regular and make you jump every time, it’s more often you that creates the fear, you who sees too much in the shadows. You’ll want to move quicker but you can’t, and you’ll curse that the controls aren’t as sharp as you want them to be, and you’ll wish you had some more substantial than a useless torch in your hand.

Then you are pulled away, back into the apparent safety of not being on the mountain and there are questions. You make some decisions, and first of all it’s normal, but then you are left wondering if it is all just a part of something else. So you guess how you think you should answer, and then wonder if you shouldn’t have because you don’t know if it is you who is answering the questions or if someone else is, and all the while it is Until Dawn finding out more about how your mind works and how to unsettle your gamer confidence.

You’ll decide on a course of action and move the right stick accordingly either left or right. However, under the decisions are percentages that tell you what everyone else did in the same situation. So even a cast-iron decision can have doubt due to the simple fact that only 37% of other people agree with you. Were they right? Should I have gone with the other 63%? In instances of life or death, you can almost hear SuperMassive Games chuckling.

It all works to wind you up that little bit further. So by the time you are a third of the way into the game, turning a corner causes the heart to race slightly. One of the brats jumping out at you causes you to curse at them from behind your controller. You want to have control of the camera so you’ll be sure it is not just someone watching you from behind the bushes, but you never do.

Every chapter you’ll be reminded of what has happened and where you made mistakes, where you caused another life to end in violence, again making you wonder if you’ll make the right decision next time. Making you think, making you doubt and making you second guess. You’ll realise that the protagonist here isn’t one of the teen cast, but Until Dawn itself and how it plays you.

Unlike the AAA behemoths of open world persuasion, you’ll reach the dawn and conclusion in under ten hours and breath a huge sigh of relief. Then Until Dawn plays one last cruel trick on you, which I won’t spoil, but sums up how it likes to toy with your emotions and mock or celebrate your achievements.

If there is one thought that has gone into Until Dawn during its development it’s this: the true terror is not what’s lurking out there in the trees, or in that dark abandoned mine, but what’s lurking at the back of your own mind.

Best of 2015: Batman: Arkham Knight
Support us on Patreon for exclusive content