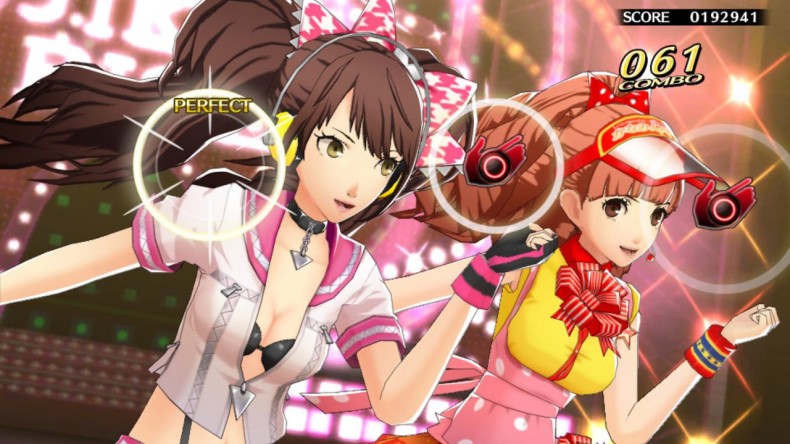 I’m in a bit of a rhythm game paradise at the moment. I’ve been playing Persona 4: Dancing All Night and this weekend, Guitar Hero Live landed on my doorstep in all its plastic peripheraled glory. Both very different games of the same genre, but also excellent examples of just what is so good about this type of game.

Both games excel on doing that thing that all good rhythm action games do, and that’s pull you into their rhythm. Persona 4: Dancing All Night does this better than Project Diva ever did, by getting its icon placements and timings correct to the beat of the tune you are playing along to. Project Diva’s willy-nilly, all-over-the-screen style frequently ends up with certain aspects not fitting the beats of the song. Then there’s the scratching, which was just messy and distracting in Project Diva, but actually feels like it was always considered to be part of the song on P4:DAN; despite the fact that it also doesn’t feel missing if you fluff the timing window. There’s also the feeling that songs with higher icon counts do a better job at making you feel this rhythm. Less icons can end up with you feeling disassociated from the tune, while higher icon counts can prove to be more difficult, it gives you a much better feel for the music.

After playing Guitar Hero Live excessively for the last few days I can say that it’s an excellent example of my point. I’ve been playing on regular difficulty, and hitting an average of 97% across all of the on-disc songs. Granted, regular isn’t the toughest of difficulty settings, but its inconsistency is baffling. Some songs will be so monotonous with their icon placements that playing them is more a of chore than a challenge, and the tricky part is finishing the song before you fall asleep. But then, on the same difficulty, you’ll have icon sets that are numerous in the extreme and placed in better formations, requiring your fingers to dance across the fret keys in order to succeed. It is in these moments when both games shine, missed notes aren’t annoying, they fill your desire to do better the next time that note formation occurs, and when you manage to nail it, it feels like you are one with the song. There’s rarely a better feeling than hitting every note on a segment, let alone managing to best the entire song. Higher difficulties require more work, but as well as providing a greater sense of reward for your trouble they’re much more involving.

It may seem like I’m ragging on Guitar Hero a bit here, and maybe I am: there’s a real inconsistency in song difficulty at the regular level, but that’s totally my own fault. Realistically I’ve been playing it on too low a setting; even so, there are some really challenging songs on the regular difficulty. I shouldn’t have to say this, but I will anyway, I love both games; they each bring something great to the table in terms of the rhythm action genre. It’s great to be getting my rhythm action kick both at home and on the move again, and for both experiences to really nail that feeling of being within the music. Higher difficulty levels may seem imposing at first, but they’re the true way to get the most out of the game. Work at it, learn the rhythms, get better and find a great experience.

A lover, not a fighter and an all round good guy (he would say that, he wrote this after all), he's happy to be here as part of GIAG.
MORE LIKE THIS
Guitar Hero Livepersona 4 dancing all night