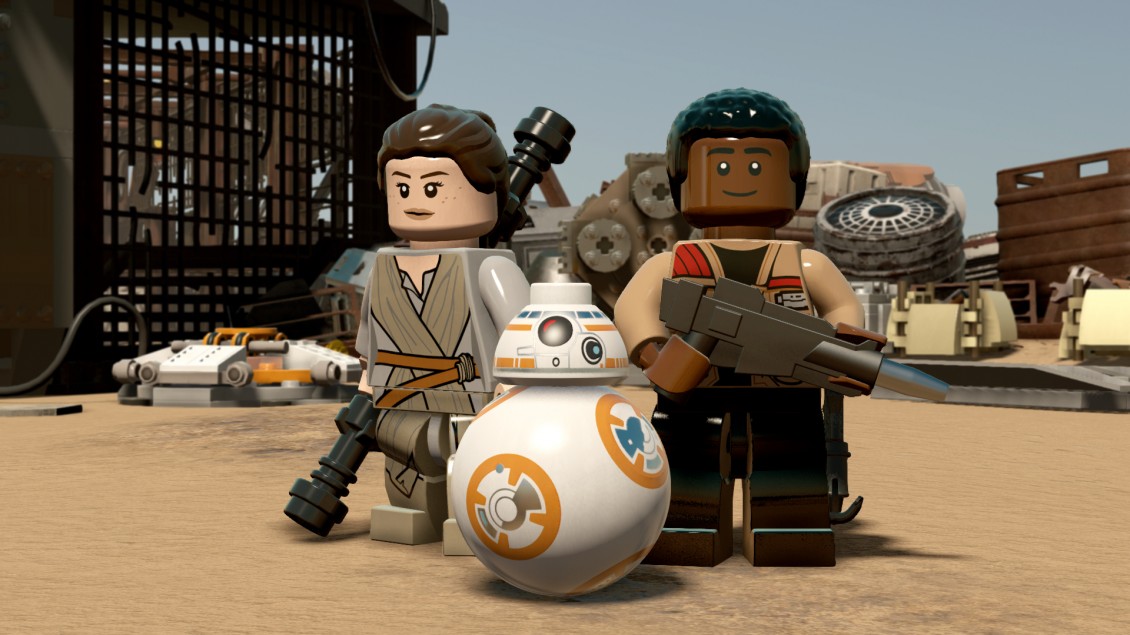 We’ve all played a LEGO game by now and by the time a new one comes around, we know what to expect. After all, since the original LEGO Star Wars, we’ve seen so many incarnations of this series in all manner of configurations including various movie, television and comic franchises. Because of this, it has become easy to peg these games down as a single formula, repeated time and time again.

Yet, one thing you can never put TT Games down for, is their relentless pursuit in delivering the childlike playfulness of what a LEGO game should ultimately be, while also respectfully lampooning the subject matter. Sure, LEGO Star Wars: The Force Awakens does all the things we expect from a LEGO game: building useful things from piles of bricks, the cathartic act of smashing everything into candy-coloured LEGO Studs, and of course, that trademark humour. But, much how The Force Awakens is a new chapter for Star Wars movie franchise, this latest game feels like a fresh evolution of LEGO games.

It starts, as any Star Wars media should start, with that ever-so-iconic “A long time ago…” passage, before cutting straight to the title screen — bombastic John Williams score as expected. For this title, TT Games promised to add even more polish and that is very much what you’ll see, as even the menus are set in the Star Wars world; a minor change that does wonders to place you into this much-beloved universe before the game even gets started. Authenticity is very much at the forefront of everything this title offers, and you can instantly tell that a team of real Star Wars geeks were behind every aspect: whether it’s through the now-common use of audio taken from The Force Awakens, or the odd little in-jokes spread throughout each level. It’s hard not to enjoy when you can see how much fun the development team had in putting this release together. Each level is brimming with silly little playthings that aren’t important in any way, but are just there to make you smile.

Oh, and you remember the typical LEGO game UI? You know, the character’s minifigure portrait with the Stud count and four health hearts next to it? Finally, it’s been replaced with something a little bit more modern, a little more Star Wars. Contained within this swanky new UI is a new yellow gauge that fills as you attack enemies, which when filled, will allow for more powerful attacks, finally giving the player offensive maneuvers that aren’t just “mash this button a lot”. However, button mashing is a big part of some of the “child-friendly” quick-time events that are occasionally added to some scripted in-game moments, although these are short enough to not feel particularly intrusive. Building is of course a massive part of any LEGO game, and that mechanic has finally been expanded with the brand new Multi Builds. Whilst previously you stumbled upon a pile of bricks and could build them into a singular structure, it is now possible to pick from up to three different items to erect. So, for example, early on in the demo build, I needed to build something that could help BB-8 reach the platform I was standing on. I had three options and I had picked the wrong one, so I had to smash it up and try again to build the correct gadget I needed. Once BB-8 joined up with me again, I could use that very same pile of bricks to create a gadget that the tiny droid could utilise in order to find a minikit.

Yes, minikits are the lifeblood of this LEGO game’s collectibles, and this time, they’ll unlock some special LEGO Microfighters vehicles in freeplay mode: tinier versions of the main game’s vehicles that apparently the minifigure characters can barely fit in.

Vehicular gameplay also takes an interesting turn. This time around, levels based around pilotable vehicles and creatures take a more exciting route, as some areas revolve around a style of gameplay that goes from on-rails shooting to full on arena-based, open world dogfights, á la Starfox 64. Finally, the thrill of piloting the Millennium Falcon in toy form matches the movie, as players will need to avoid landing themselves within a TIE Fighter’s deadly sights, all while trying to find ways to strike back.

Aside from the new approach to piloting ships, the brand new Blaster Battles also sound interesting, although I wasn’t given an opportunity to sample them for myself. However, what we do know is that these sections take place in an over-the-shoulder view as you fire upon enemies, while still being able to interact with the environment as well as build things like turrets. Infact, we’ve also been told that now AI characters can build things too as certain points.

We know that 18 levels will be featured, with 11 of them taken straight from the film, while the other seven cover events leading up to Episode VII. Joining those levels are another five hub stages, set in Jakku, Takodana, Starkiller Base, D’Qar and of course, the Millennium Falcon herself. I rushed through the three demo areas relatively quickly, although it remains to be seen whether or not these levels have been edited down for the demo. If not, I worry for the game’s length, although you can be sure there’s a big focus on finding collectables and purchasing new characters and vehicles. With over 200 characters and 40 playable vehicles/creatures that span the entire Star Wars Saga (including some from mediums outside of the movies), there’s plenty of gameplay here for completionists. These days, we’re used to seeing LEGO games feature dialogue ripped directly from the movies themselves, but this game will also feature specially recorded dialogue from members of The Force Awakens’ cast. Speaking to Graham Goring, Lead Story Designer at TT Games, he would only confirm one actor’s involvement: Daisy Ridley (Rey), but he assured me that we’d be “surprised’ to see who else they managed to get into the sound booth. As always, the humour is spot on, with one of the demo stages featuring a particularly amusing scene of Kylo Ren’s bedroom, complete with Darth Vader posters and merchandise plastered all over it.

Surprisingly, we won’t be seeing the finished game until June of this year, months after the original theatrical and DVD/Blu-Ray releases. It’s quite pleasant to see that this isn’t a game being rushed out of the door, and what I’ve played so far, I have every faith that this’ll be a game that LEGO and Star Wars fans of all ages will enjoy this latest minifigure adventure.