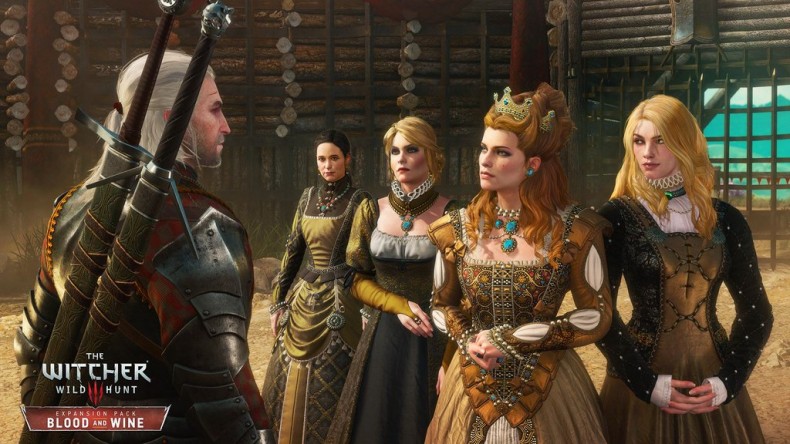 The wait has been long but news is finally beginning to filter through about the final expansion for the Witcher 3: Wild Hunt, entitled Blood and Wine.

Last week the expansion’s, which is supposedly going to be 20 hours long, cover art was released, showing Geralt sat in a chair drinking wine with nasty looking vampire lurking behind him, and now five new screen shots have been released.

The give images don’t reveal much, but they do give a bit of stuff away. What’s immediately striking is the bright colours of Toussaint, where the expansion is placed.

Toussaint, where Blood and Wine is set, is a fairytale kingdom untouched by the war, disease and poverty that destroys the rest of the Witchers world, but seemingly not with the secrets and dangers that lurk around every corner.

In one of the images we see four nobel ladies talking to Geralt in what appears to be a battle pit. The one front and centre, with the crown upon her head, is undoubtably Anna Henrietta, the ruler of Toussaint and also a former lover of Dandelion. In fact, Dandelion nearly even settled down with her, until he cheater on her and it all turned quite violent.

In two images of Geralt, the one on Roach and the one standing next to giant mushrooms, we see him wearing armour that bares a striking resemblance to the armour in the original Witcher game and also making a return are giant centipedes!

In the final image we see Geralt entering what appears to be an outside summer banquet.

Witcher 3: Blood and Wine is set to release in the coming months.