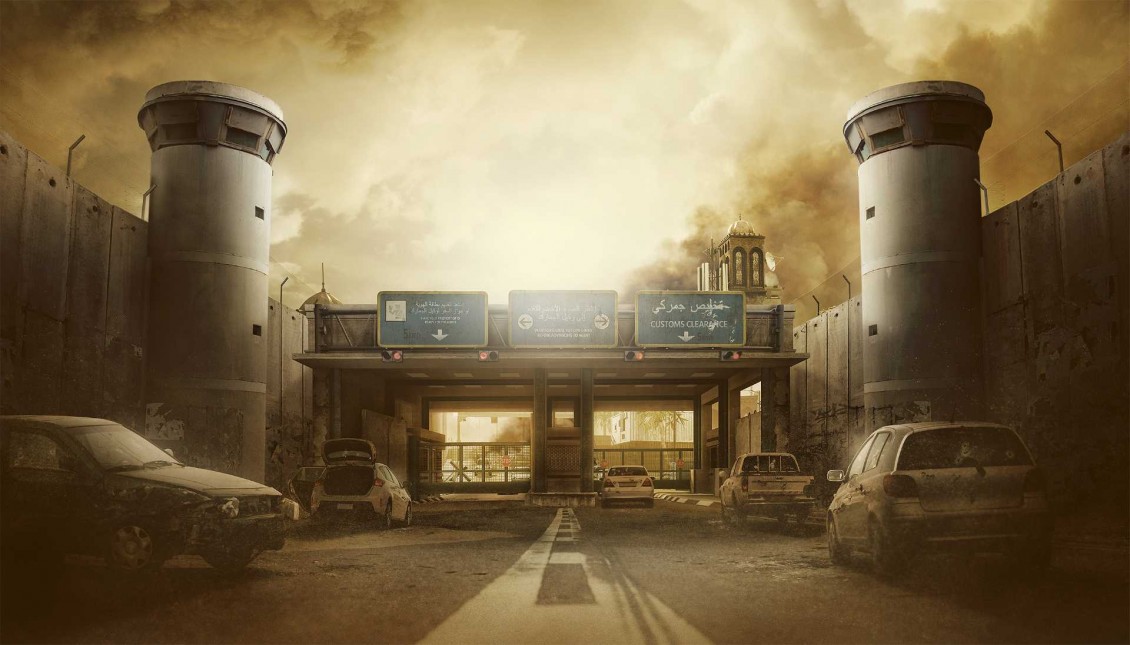 Rainbow Six Siege, the shooter, which focuses on teams working together to either attack or defend an objective, is getting its second dosage of DLC today as the second season, entitled Operation: Dust Line, was released. The new content package includes one new map, two new operators and a deluge of different tweaks and changes that may have a big effect on how the games played.

We sat down with Operation: Dust Line’s designer, Leroy Athanassoff, to get a low down on the new content and to also get an insight on the complexities of game design.

The new map is entitled ‘Border’, and it’s a dusty border control sector lost in the middle East. Looking dry and decrepit, a far cry from the sunny suburban homes and landed planes we’ve become accustomed to in Siege, it’s main feature is verticality in doors as you can get to the roof of the map’s centrepiece building and then repel inside due to the internal court yard.

On ‘Border’, Leroy said:  “This map is very different from the other maps. There are two main aspects first there is a lot more restrictions, which means we have more possibilities for the defenders. To create new lines of fire. So in term of how you will need to defend, how to understand the structure, and how to understand the architecture of the map, it’s more complex. So it creates more depth for the player, to understand and to learn and to adapt. Another aspect that is really important is that there are a lot of outdoor and indoor areas that are merged. There is an outside catwalk and for the first time in a map you will be able to repel inside the map, so it creates vertical fighting indoors. So we think it will create a lot of interesting scenarios, and that was our take on this map.”

Now onto the first of the two new operators, Valkyrie, who’s a kickass lady with a strong tattoo game and who’s special ability is to be able to set a series of small camera around the map to keep an eye out for enemies presence.

Leroy believes Valkyrie adds a lot more depth to the tactics of defending sides: “When we first were thinking about Valkyrie, when we were designing it, we looked at the how the attackers would use the drones as a team, how one player would look for the objective and then an other are going to a strategic part of the map and they were creating a network of communication, to be able at any time see what’s going on. “We’re like okay, cool, it’s interesting because it’s a dynamic way of knowing where things are on the map and it’s a good strategy. And so for the defenders we have cameras that are static which is cool, but it’s still something that is static so it means everyone can adapt to where the cameras are.

So we’re like, okay, what if we give Valkyrie cameras that can be put where ever, so the defenders are able to create their own network of communication? And the good thing with that is first it adds depth and strategy, and it should make attackers more careful about where they’re going as they may get spotted by the cameras.”

The other new operator is Blackbeard, who is the most typical dude-bro soldier you can imagine. It’s literally as if Dan Blitzerian joined the Navy Seals. His hook is that you can attack a small shield onto the top of his rifle that can cover his head, which works really well when shooting in windows or peaking around cover.

Leroy also explained why Blackbeard is good tactically:  “What is interesting with Blackbeard is that we believe in Rainbow Six that shields are super interesting. Right now we have Montagne and Blitz who can be real, fully protected but they trade weaponry for being protected and they only really have hand guns.

“So we wanted to a character to had firepower but also protection, but what if the guy is only protected at the head and the rest of the body is exposed and can take damage.

“But on the other side he still has a nice rifle so he can really attack. So this creates an interesting game play element where, for example, in terms of windows play we can position Blackbeard there and that could push a defender back. Some defenders like to push away from the objective but a Blackbeard may make them retreat.

Moving away from Operation: Dust Line, Leroy explained just what goes into designing a map for Rainbow Six Siege: “It’s a super complicated process, the thing that is really important since these maps are competition the balance is absolutely critical, especially the bomb sites which need to be balanced in a way that give them enough access points to make it equally defendable and accessible.

“There’s equations for how many doors, windows, hatches, how many barricades can they lay, how many defensive traps can they set, it’s really a mathematical formula to have the balanced points to make a balanced match.

“When we design a map, you have no idea how much we play it. Not only the dev team but also the play testers and we continuously play to make sure the balance is just right. We need to test every possible scenario with every operator to make sure it is completely balanced”

But if Leroy could design a map of any type, in any location, in any time ever, what would he choose?

“I think what I would love to see, maps in historical, iconic buildings. Like, what if we fight in the Empire State Building? I think that would be interesting to make.

Finally, and the most important question of all, where does Leroy keep his ketchup?

What a beautiful way to end.

Interview and hands on based on a trip to Cologne. Ubisoft paid accommodation and travel.

To support GodisaGeek, you can buy Siege via these links: