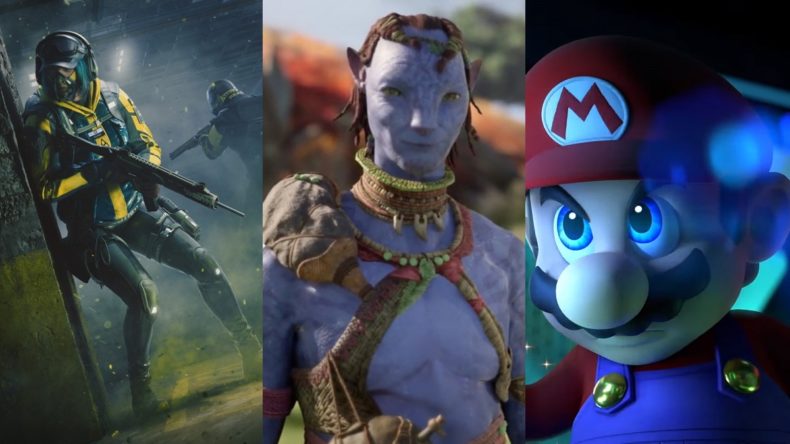 Last night saw the first main presentation of this year’s E3. Ubisoft Forward took place, revealing new games, surprise announcements, and more. To save looking through YouTube and scouring the internet for al the trailers and information, we’ve put everything together in one place. Here are all the Ubisoft E3 announcements:

Royal mode and Ranked Matchmaking mode are now available for free in Trackmania as part of Starter Access. Royal Mode is an all-new feature, and has been designed for friendly team play, with daily renewed short and fun maps. There are also new physics and innovations available, including Water & Plastic Blocks, and Animated & Dynamic items.

The latest season coming to For Honor was shown off in a new trailer.

“After centuries of spoiling and exhausting the lands with constant battles for power and control, Mother Nature has decided to unleash her burning wrath. The once rich and bountiful Heathmoor has become dry and desolate. The scorching heat toys with the minds of the most ferocious warriors, bringing forth new demons and nightmares. Who will be their salvation?”

Two of the main characters from previous Watch Dogs games are a part of Watch Dogs: Legion – Bloodline. The new expansion is set before the events of the main game. Aiden Pierce leaves Chicago for London to meet up with his nephew Jackson, and Wrench from Watch Dogs 2. After all, Watch Dogs has always seen great character development. Seeing familiar faces return should be exciting for fans of the franchise.

“Caught between a powerful military robotics corporation and a returning DedSec member with an opposing agenda, Aiden must rely on his grit and experience to navigate a hostile city, try to outmanoeuvre his enemies, and keep his family intact.”

Bloodline is part of the Season Pass, and will be available July 6.

Tom Clancy’s Rainbow Six Siege will be coming to Google Stadia on June 30. Players on PC, Stadia, and Amazon Luna will all get the opportunity to enjoy unified matchmaking and progression from then. Crossplay between all console players and cross-progression will also be coming to Siege early 2022.

Assassin’s Creed Valhalla will get a second year of content

For the first time in Assassin’s Creed history, Valhalla will get a second year of expansions. With Wrath of the Druids already out, and the Sige of Paris coming soon, it was revealed another year of new expansions will be coming. Although there were no details, Karen Lee, Senior Community Developer at Ubisoft, said Odin wasn’t done with Eivor yet, showing a teaser trailer that saw the door to Valhalla.

Along with the announcement, it was also revealed that Discovery Tour: Viking Age was coming. It will allow players to learn more about the Vikings, as well as spend time playing through every day tasks that used to be completed by them during their reign.

Ubisoft showed off a cinematic trailer featuring Yaran dictator Antón Castillo visit a boat and issue an order to kill everyone on board. It was an intense trailer that showed just how ruthless he can be. There was also information about what players can expect in Far Cry 6’s Season Pass coming post-launch. One of the features will allows players to “dive into the twisted minds of legendary Far Cry villains. in other words, things are about to get really weird.

The trailer showed off a messed up vision where the player will be able to control Vaas Montenegro, Pagan Min, and Joseph Seed. It will delve into their minds and uncover their backstories, battle with their inner demons, and reunite with familiar faces.

Ubisoft revealed the release date of Just Dance 2022, including 40 new tracks and a collaboration with Todrick Hall. Players will be able to “Level Up” their dancing skills with chart-topping hits and viral internet phenomena. It will release on PS5, PS4, Xbox Series X|S, Xbox One, Nintendo Switch, and Google Stadia.

A new subscription service called Rocksmith+ was announced by Ubisoft. It will teach players how to play guitar and bass through their favourite songs. Coming Summer 2021 for PC and Fall 2021 for PS5, PS4, Xbox Series X|S, and Xbox One. However, Rocksmith+ wnt be coming to iOS and Android until later.

Riders Republic get a release date

The new MMO extreme sports title Riders Republic will be launching September 2, 2021 for PS5, PS4, Xbox Series X|S, Xbox One, PC, and Google Stadia. We got to see some of the awesome gameplay on offer, which you can read all about here. Firstly, it’ll include high speed races and intense multiplayer battles. Secondly, real-life landmarks and locations can be discovered. Ubisoft also announced players can sign up for upcoming Betas by visiting their official website.

The next instalment in the Rainbow Six franchise will be releasing later this year on PS5, PS4, Xbox Series X|S, Xbox One, Amazon Luna, Google Stadia, and PC. Extraction will include full cross-play, cross-save, and cross-progression.

“As the threat grows, our Operators rise to meet it. In Extraction, Rainbow Six has been united under REACT. Their mission: learn about the enemy, stop it spreading at all costs . . . and leave no one behind.

Hibana has gone Missing in Action. See Operator Ela, Lion and Nomad under the command of Eliza “Ash” Cohen, mount a daring rescue mission, as they use intel, teamwork and improvisation to save one of their own from a dangerous new enemy.”

There was also a deep dive trailer that showed of Rainbow Six Extraction’s gameplay, which you can watch below:

After an accidental posting from earlier today, Ubisoft officially revealed the sequel to 2017’s Mario + Rabbids Kingdom Battle. In Mario + Rabbids Sparks of Hope, players will “embark on a journey to restore order as Cursa, a mysterious and malevolent entity, twists the planet with its evil influence.” Turn-based tactics are back, and will mix with real-time movements as Mario and friends fight to save the galaxy once more.

In addition, there was also a sneak peak trailer of some of the gameplay players are likely to experience in Mario + Rabbids Sparks of Hope. You can watch it here:

A brand-new game set in the world of Avatar was revealed by Ubisoft. Avatar: Frontiers of Pandora is a first-person, action-adventure game developed by Massive Entertainment, in collaboration with Lightstorm Entertainment and Disney.

It will harness the power of the latest iteration of the Snowdrop engine, bringing to life the world of Pandora for an immersive and open world experience. You’ll take on the role  of a Na’vi and embark on a journey across the Western Frontier. There, players will witness a never-before-seen part of Pandora. Formidable RDA forces become a threat. Also, a living and reactive world inhabited by unique creatures and new characters is free to explore. In conclusion, it looks set to be an epic adventure on next-gen consoles.

MORE LIKE THIS
Assassins creed valhallaE3 2021Far Cry 6For Honor