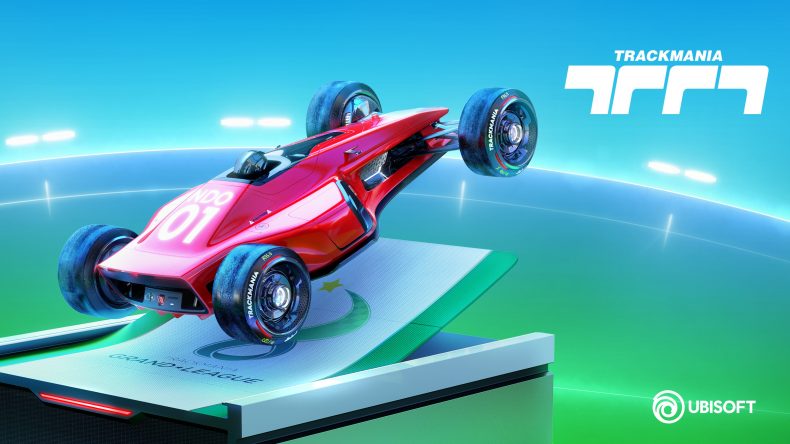 I remember discovering Trackmania back in 2003, when I randomly found a copy of the original game on PC. I’m glad I gave it a chance too, because its unique mix of driving and puzzle solving made it an absolute treat to play. That first game remains one of the most interesting driving games in existence, as far as I’m concerned.

Developer Nadeo returns once again, seventeen years on, with a game that aims to return the series to its former glory. Not that it’s been bad at any point, but it’s certainly strayed from the originality of that first game and that’s what Trackmania aims to rectify.

I think it’s fair to say that it hasn’t had the easiest start, given the confusion surrounding its subscription model. Which isn’t actually a subscription, despite initially sounding like the dictionary definition of one. Trackmania is essentially a free-to-play game, with free Starter Access allowing players to race in solo and multiplayer on “quarterly renewed official campaigns” as well as a raft of other modes, including the track creator. Paying adds more content, with how much depending on which version you choose. Now we’ve got that cleared up, you’re probably wondering how the game actually plays. Rather well, actually. Okay, so I’m a little disappointed that there is only one vehicle type, but it’s how you drive that vehicle that matters. As much as Trackmania is an arcade racer, you can’t just gun it around every corner, you’ll have to vary your speed to adjust to each situation. This is especially notable when driving on the various surface types, especially when one of those surfaces is ice. Yes, you read that right.

Ice is, as you’d expect, the most difficult surface in Trackmania. Perhaps too difficult sometimes, as there is literally no traction and you’ll simply slide off the track or into barriers. That’s fine, expected even, but the track design on some of the official circuits simply doesn’t fit the surface type and it leads to frustration. Especially if you slide off the map in the final area.

If that does happen, the nature of Trackmania is reliant on quick restarts. It’s not a racer where you’re expected to do several laps, with events lasting upwards of ten minutes, it’s very much about quickfire racing against the clock. Maps very rarely last longer than a minute, which feeds into that “one more go” feeling at which Nadeo’s series has always excelled. Indeed, you’ll likely spend several minutes on some maps, trying again and again to earn that elusive gold medal time. Luckily, the game doesn’t really punish you for only earning a bronze or silver. You can keep going in official events, to just enjoy the feeling of driving that fun, light car. That car can be a little too light sometimes, however. It’s not exactly fun when you think you’ve hit a jump at the right angle, only for the landing to send you bouncing around like a rubber ball. You’ll notice more issues when diving into the Map Reviewer, in which you’ll play (and sometimes rate) user-created tracks that have been uploaded. Assuming you can get past the server issues, some of the tracks can be infuriatingly difficult. You only have a 3-minute time limit too, as you’re playing against the ghosts of other players in real time, which will often result in many players not even reaching the finish line. It feels like a difficulty rating should be implemented, much like Super Mario Maker does, so you can decide for yourself whether or not you want to test the limits of your blood pressure while playing.

When you do play online, usually in asynchronous multiplayer against player ghosts, it can be great fun. You can learn new lines through levels, watching others who are faster than you, or you can laugh along as you and others crash spectacularly. When playing in real time multiplayer, it’s usually pretty smooth once you’re on the track, the server issues only really affect actually loading into those tracks. When you tire of racing, online or otherwise, you can jump into the track editor to create your own maps. You can decide whether you want to use a simplified or advanced version of the editor, and even if you want to create using a gamepad or mouse and keyboard, giving you plenty of control over how complicated you want your creation to be. There are a couple of minor issues with the lack of any real tutorials and the creator itself can be a little fiddly and unintuitive at times, but otherwise you can build whatever you want. You will need to be able to drive from start to finish though, in order to validate your creation before uploading it for others to play. You can even add it to your own queue in Map Review, so you can see how others take on the challenge of your track.

Map Review is where Trackmania simultaneously succeeds and fails, as it can provide some of the most entertaining moments in the game, but it’s an incredibly mixed bag. With a little better curation, it could be the racing equivalent of Super Mario Maker, but ultimately Nadeo’s game falls quite a bit short of that benchmark. Its official tracks can be just as frustrating as the user-created ones, especially when they wind all over the place and the camera can’t quite keep up, leading to lots of exasperated sighs as you press the restart button again. And again. And again. But when Trackmania is good, it’s incredibly entertaining. And as a live game, it has the potential to get even better.

Simple, fast and fun
Excels at giving you that “one more go” feeling
Track creation is as simple or deep as you want it to be

Trackmania can be incredibly fun, but some awkward track design and camera issues can really dampen the experience.

Trackmania Turbo Will be Compatible with Oculus Rift and PlayStation VR