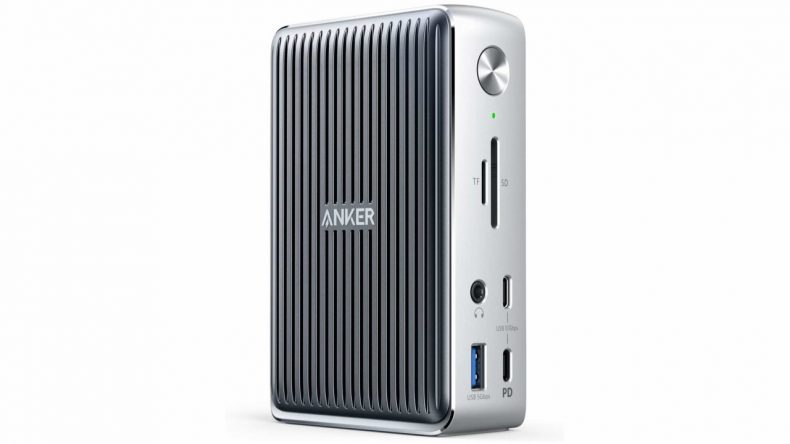 If you tend to game on a laptop often, you’ll have likely spent a considerable amount of time cursing the lack of available ports to plug in all the peripherals and accessories you need. If you have, chances are you need to invest in a dock – but bear in mind that “invest” is the operative word.

For example, the Anker PowerExpand Elite 13-in-1 Thunderbolt 3 Docking Station weighs in at about £250 and, despite the fact that it will revolutionise your laptop set-up, that’s a pretty spicy meatball. That being said, it’s incredibly compact considering what it’s capable of – and especially compared to a lot of similar products. It’s a good-looking piece of equipment to, with a brushed metal finish and cloth pad on the underside. The ports are well-spaced and aesthetically pleasing, and the device just looks incredibly professional.

If you want the most out of it you will need a Thunderbolt 3 port on your laptop or PC, something that still isn’t a common feature even in fairly new devices. I did set it up with a USB-C to USB-3 adapter on my laptop, and was able to get some use out of the Thunderbolt cable, but if you connect it to a Thunderbolt port you’ll get faster data transfer speeds and better overall performance. With this connected to your PC or laptop you’ll have pretty much any port you need right there in one handy place that doesn’t take up too much space. There are 4 USB-3 ports, two outgoing Thunderbolt 3 ports, a port for 3.5mm audio jack, as well as slots for a variety of storage cards and microSD cards. There’s even a HDMI port so the PowerExpand Elite works as a pass-through, or can connect a double or triple monitor set-up if that’s what you need.

The only thing I couldn’t get to work properly through this things was my Oculus Rift headset, which simply refused to play ball in anything but my PCs primary HDMI port. But at one point I had an Xbox One controller, surround sound headphones, and my mouse and keyboard running through the PowerExpand Elite while it charged my mobile with the Thunderbolt cable. I had no issues whatsoever with any of it, though it did highlight the fact that most PC users who have relatively easy access to their tower won’t really need this device. That said, it’s a handy thing to have if you want all your connections closer to hand.

If you are able to connect it via a Thunderbolt 3 cable, I’d advise doing so for all data transfers as it’s a beast that can transfer 20Gb of data in just over 6 seconds. Equally fast, the 85W Thunderbolt port can charge your mobile all the way up in just over 90 minutes, which is impressive if you’re on the go a lot. The only real downside is that it requires its own power supply and comes with a pretty hefty 180W power adapter.

To be honest though, that’s a small concession if it makes your set-up easier to access and manage. The PowerExpand Elite is beautifully made, durable and highly functional, and if you’ve spent any amount of time lamenting your connectivity issues, it’s almost a must-have. Just be aware that this isn’t a cheap device, and for some the high pricetag won’t balance with the quality of life improvements it offers.

Anker releases new PowerPort+ Atom III Charger in the US