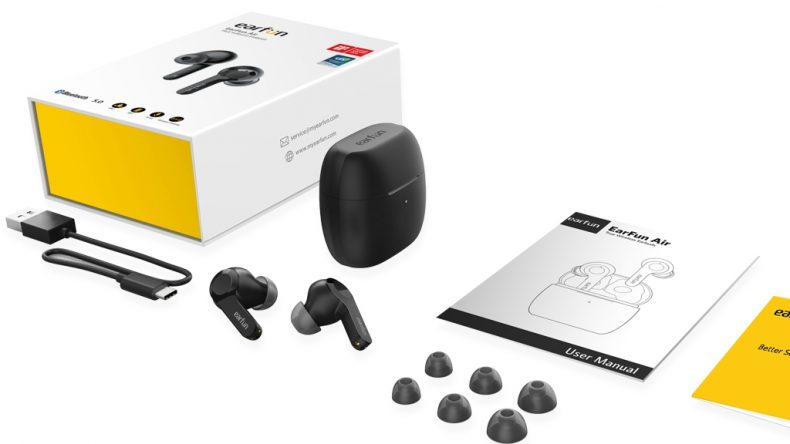 A little while ago I reviewed the EarFun Free wireless earphones, an affordable alternative to a pair of pricey AirPods. Now I’m taking a look at the slightly more expensive EarFun Air earphones, which have recently been released onto the market. Considering there’s only a difference of about £10 between the two, the Airs feel and look considerably more expensive – and they also boast a few more features.

First things first though: are they comfortable and do they stay in the ear? Because as nice as the AirFun Free are, they have trouble staying in during rigorous exercise, ruling them out for a heavy session at the gym. The Airs are a little better, coming designed with a short stem that aids grip and stability, but they’ll still likely come loose if you’re running or jumping. But they are very comfortable and if you’re just using them, say, in the office or during a walk they’re perfect.

They have a 4-microphone set-up which allows for fairly clear voice recording and, of course, phonecalls, which is another win if you’re using them while working from home. The back of each bud has an array of functions which you’ll need to learn if you want to get the best out of them. For example, holding your finger against the right bud will raise the volume while the left lowers it, and you can control playback with a series of taps to the correct bud. I will say that these felt super-sensitive, and it didn’t take much to accidentally manipulate them. Considering these will only set you back around £60, the sound quality is excellent. It would have been nice to have some kind of equalizer or mode-switcher, as I found that for bassier music they were just a little bit tinny, but it was barely enough to notice. More subdued music sounds sublime through the EarFun Air, while chatting on the phone is pretty clear but doesn’t do a great job of cancelling noise on your end, meaning whoever you’re talking to might not get the cleanest experience.

Interestingly, the EarFun Air are fully waterproof up to about a meter, though why this is a feature is a bit beyond me. I mean, it’s handy if you’re out walking in the rain, but they don’t stay in well enough to work up a sweat at the gym and if you’re using them while swimming you’re asking to lose one in the pool. That said, it’s probably better to have the feature and not need it than need it and not have it.

The carry case is small and sleek, and has a single USB-C port in the back for charging. It stores power and will recharge the buds when not plugged in, and you should get around 6 or 7 hours battery life out of them when fully charged. If you have a wireless charging station, chances are the EarFun Air case is compatible, removing the need for wires altogether.

For the price, these are arguably among the best wireless earphones available. Sleek and functional, they offer excellent sound quality and durability, and a veritable wealth of features. The only caveat is that you’ll need to spend a little time learning which bud to tap and how many times if you want to make calls or skip a track.