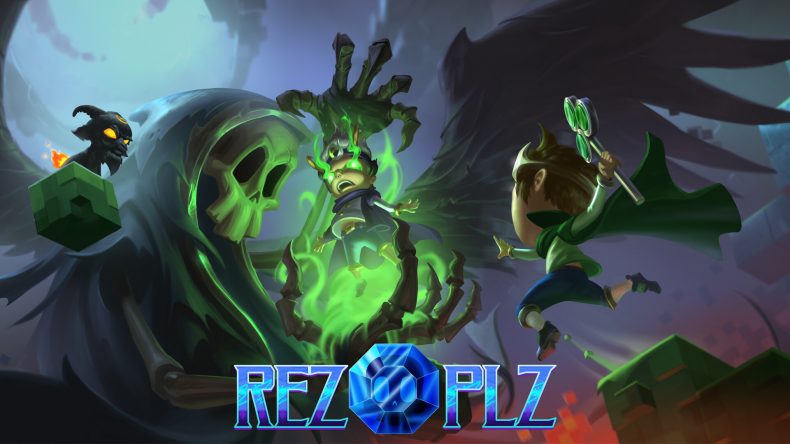 Brothers Arcan and Zeph are idiots. No really, they are. Somehow they ended up enrolled in a magic school, despite their complete inability to perform any of it. One day, arriving late for school after a night of heavy drinking, the teacher asks one of the brothers to perform a simple spell to light a candle. This results in the other brother’s innards exploding outward in a shower of blood and viscera. Yes, they’re that bad at magic.

It turns out there’s a Resurrection Scroll however, so the brothers are reunited in the nurse’s office. Before anything else can happen, the school is overrun by wizards of the Dark Arcanum and their demonic creatures. Arcan and Zeph aren’t seen as a threat and are promptly thrown into the nearest pit. That’s all the story you get. Arcan and Zeph are left to fend for themselves after miraculously surviving the fall, and they must work together to escape the depths. The only problem is, neither of them is any good at anything, and all they really have is the Resurrection Scroll and a handful of crystals to power its magic.

Yep, as the title suggests, they have to kill each other to solve puzzles and traverse chasms, resurrecting the dead brother afterwards. You can only do this as long as you have crystals however, so you have to be careful. Well, as careful as you can be considering your goal is to survive through murdering each other in a variety of brutal (and often extremely painful) ways. Is that spike pit too big? Create a brotherly corpse-bridge for the other to use. Need to activate a pressure plate but there’s nothing around to drop on it? Burn one brother alive and use his skull as a weight. It’s a pretty cruel and inventive way to create a new style of gameplay.

The problem is, REZ PLZ is clearly designed as a co-op game. Played solo, there are some puzzles that require more dexterity than the average human has. The first boss, for example, sees rapidly-rising lava engulfing the stage and you’re expected to deal with pixel-perfect platforming and object-throwing, all while swapping characters and moving them independently. You even have to deal with enemies, which might not be so bad if this wasn’t a one-hit-kill game. With one player controlling both brothers, it’s far more frustrating than it should be. That first boss also serves as a huge difficulty spike, with none of the first five levels preparing the player for such time constraints. That boss also shows the broken checkpointing within REZ PLZ. At one point, both brothers died and although it reloads instantly, it put them both back in a place that meant I couldn’t progress. I needed to have a pressure plate activated, but couldn’t actually get to it because of where the game had respawned the brothers. This meant having to restart the level from scratch, which also meant I had to watch the unskippable cutscene again (unless it bugs out, forcing another restart). Something you best get used to, because it honestly feels like some levels within the game aren’t designed to be completed at the first time of asking. That said, there is the option of “infinite” mode, which removes the need to use crystals, effectively allowing you to keep trying again and again. It’s a good way of keeping things accessible, especially as you can switch this on and off as you please.

As you progress, you unlock spells for your bumbling wizard siblings to use in solving puzzles and battling the odds of survival. You also encounter new and Mortal Kombat-esque ways to kill each brother, for the other to use the corpse to their advantage. It does make you worry about the mindset of the developer, quite frankly. Thankfully, as you might expect from the title alone, REZ PLZ is not a serious game. It uses its humour well, both in the sarcastic way the brothers interact with the other characters throughout the game, and in the way each death is usually over-animated to appear a little less grim than it actually is. Playing with another player will result in much laughter when the realisation strikes that one of you is going to have to die so the other might progress. Or when you accidentally murder each other. Accidents happen, after all.

It’s easy to tell that REZ PLZ isn’t too serious, thanks to its almost cartoony pixel art. The brothers have huge heads and anime eyes, and the overall design reminded me of 90s DOS games. That’s a good thing, by the way, as there were plenty of fantastic 2D games during that era. That first boss level I complained about earlier, while frustrating, is vibrant and colourful. Even when you’re essentially travelling through a Hell dimension in the second chapter, it never dulls the palette or skimps on the design quality.

I won’t pretend that REZ PLZ is for everyone. It has a few too many issues to recommend to anyone wanting a solo experience and it certainly isn’t for a younger audience. But if you’re after a smart, often amusing puzzle-platformer, particularly if one with couch co-op, then you could do a lot worse than this brutal little number.

Although it has issues with difficulty, REZ PLZ is a fun and interesting, co-op puzzle-platformer with a dark sense of humour.