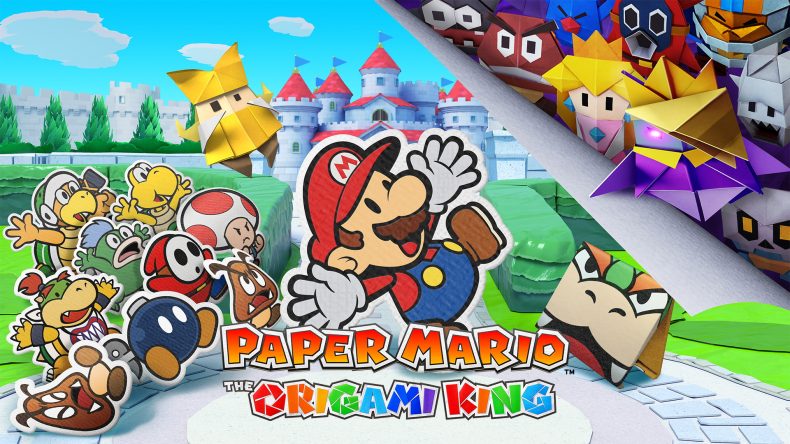 There’s something I’ve been thinking about for a while now. Are Mario and Bowser actually friends? Not besties, of course, but in the way Batman needs Joker, it’s rare a Mario game comes out without Bowser somewhere present, and frankly, just lately the two “enemies” have been alarmingly pleasant to one another. It’s testament to Paper Mario: The Origami King and its writing, then, that this is just one of the thoughts that was left in my head after playing through its meaty story campaign.

The Mushroom Kingdom is in peril again, this time due to Olly, an Origami would-be-King who wants to turn the Paper Kingdom into a, well, folded Origami Kingdom. It’s paper still, but just a different kind of paper, and the factions don’t appear to get on. There’s an analogy here for the world we live in, but perhaps a Paper Mario review isn’t the place for it.

But there’s an outlier in Olivia, Olly’s sister and one of the most pure and good characters I’ve seen in any game in a good long while. Her naivety, good-natured joshing, and just darn-it sugar sweet loveliness are a constant joy throughout The Origami King. She’s the yin to Paper Mario’s silent-protagonist yang, and for the record, no, it’s never explained why every other person in the entire world speaks while Mario remains mute. It’s Olivia who drives the narrative, and it’s a story replete with the good natured humour the series is renowned for. It’s witty, it’s interesting, and honestly, it’s better written than it has any right to be. The Origami King isn’t really an RPG, but that doesn’t matter. It’s an action adventure game with turn-based combat (actually, it also has multiple live-combat scenarios that I won’t spoil here) that rewards your exploration with a plethora of collectibles, coins, and Toads. While the collectible trophies only really serve to fill out the museum in Toad Town, the coins and Toads are a different matter.

The multi-coloured Toads are well worth searching out, especially early on where they are plentiful and obvious. During battle you can press Y to throw money at the problem, whereupon the Toads surrounding the arena will jump to your aid, solving the puzzles, throwing objects at enemies, and healing Mario up.

This plays into how coins work. While plentiful, it’s rare you feel overly rich until later into the story, whereby the best weapons are discovered making the combat feel slightly trivial. Spending coins to solve combat puzzles is a viable option, and these combat puzzles will almost certainly be a point of consternation among fans – for the record, the fact you can spend coins to buy time as well as call in your Toad pals suggests to me that Intelligent Systems knew that this system isn’t always perfect, and as you become stronger you can instantly defeat enemies without even battling them, which reinforces that the team knows a small amount of the battle system goes a long way. To further hammer this point home, often I’d spend 500-600 coins to get the Toads to solve a combat ring puzzle, and the resulting victory would net me near enough that amount back again. In place of a leveling system, the coins rewarded for doing well in battles (no damage, perfect puzzle solving, using your special attacks to end a fight) allow you to buy charms from vendors that mix things up. While you have health outside of fights for when you take damage from environmental attacks, in battle a charm can boost your health based on the enemy difficulty. You can buy charms to extend your in-battle timer; give you better defense, but there are also charms that give you discounts at shops, or make the controller vibrate when near a Toad or hidden block. There’s depth, for sure, and you can find hearts in most dungeons that will permanently increase your health pool, too.

Initially, I think you’d be hard pushed to find someone who isn’t wowed by the unique battle system. Seeing how you have to rotate and move the arena in order to line up foes and get an attack multiplier is typically Nintendo in that the ingenuity leaves you slack-jawed and bemused as to how or why it’s never been done before. Later, however, the combat left me making a noise I haven’t made since Final Fantasy VII first came out. Remember that groan you’d make when an enemy surprised you for the umpteenth random battle when you just wanted to get from A-to-B? It’s that, and really, there’s just a few too many surprise attacks that force battles mid-dungeon or castle. Luckily, the boss encounters are plentiful and brilliant, only improving the further you play.

Flipping the idea, and placing the boss in the centre ring, the idea now is that you have to use arrows and icons to plot your path to the boss and work out how you can damage it. At first you’ll only have shoes to perform a jump attack and a hammer to smack enemies with, but as you defeat elemental bosses you unlock magic attacks that are the key to beating the end-of-chapter bosses. There are five origami spools you have to destroy before you can approach the story’s conclusion, and every one of the worlds is masterfully crafted. More than that, though, often there are large parts of the world that require unique traversal, and exploration, to progress to the actual main part of the area. Whether you’re carting around in a motorised shoe in the desert, or exploring the ocean depths for treasure, Paper Mario: The Origami King never stops bringing new ideas to the table. Sometimes it’s a simple change of tactics required for a new enemy (and there are plenty of enemy types, right to the end), but there are also entire gameplay changes that are so well executed. It really must be commended how much variety is on offer here, and it’s a large game, so to keep things fresh right up to the last moments of the game is an astounding feat. The sheer creativity is unrivalled, and the fact some ideas are simply used for single areas is just ridiculous.

Also worth commending is how well it looks and runs. It’s a gorgeous game, and every character feels like their own person. Even when a Shy Guy looks like another of his ilk, they still have their own dialogue. On top of that the soundtrack could well be one of the best this year. From disco grooves to full-on orchestral metal that wouldn’t be out of place in a Square Enix game, I cannot stress enough how stellar the soundtrack is.

Paper Mario: The Origami King is a triumph in so many ways, I can’t stress that enough. Presentation wise it is incredible, and the world feels fully alive, open, and vast, with many a way to explore it. The combat is so close to genius, too. While the boss fights are some of the best I’ve seen anywhere thanks to how unique they are, I can’t pretend I wasn’t avoiding battles with the standard enemies by the end. Still, this is by far the best Paper Mario game in a great long while, and if you can accept it’s not quite an RPG by most people’s definitions, and instead appreciate a sprawling, beautiful action adventure with turn-based combat, a great script, and a sublime soundtrack, you’ll have a wonderful time.

A creative triumph, with new ideas that last the entire game, some of the best boss battles in ages, and praiseworthy presentation. Paper Mario: The Origami King is only let down by some of the general combat being a bit skippable.