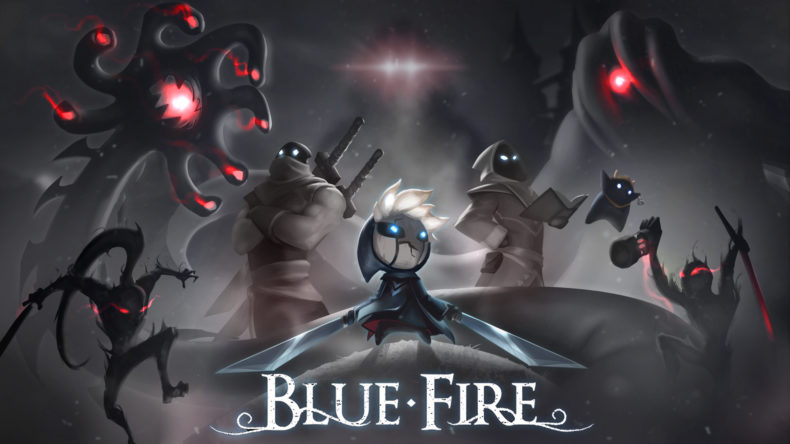 I’ll admit I didn’t connect the dots that joined one of Blue Fire’s less-exploited mechanics to its title for some time. I kept waiting for the story to make sense, to understand the purpose with which my little hooded badass strode headlong into the dark, but alas if there’s one thing Blue Fire skirts around like a politician round a straight answer it’s a plot. You awaken, a diminutive little warrior with a pair of swords strapped to your back, and immediately embark on a quest to help some gods and defeat some other gods and generally clean up the big globs of corruption that cling to the castle walls like dragon snot. And you do it because to not do it would be a hell of a lot less fun – at least as far as I can tell that’s the main motivation. So it’s a good thing that Blue Fire provides the fun in spades.

You see, you’re an incredibly agile wee swordsman, and as you progress you’ll unlock the usual 3D platforming tools like a double-jump, wall-run, dash, etc, which you’ll soon be chaining together to conquer death-defying obstacle courses and  platforming puzzles to unlock new gear, abilities and, crucially, hearts that extend your health. 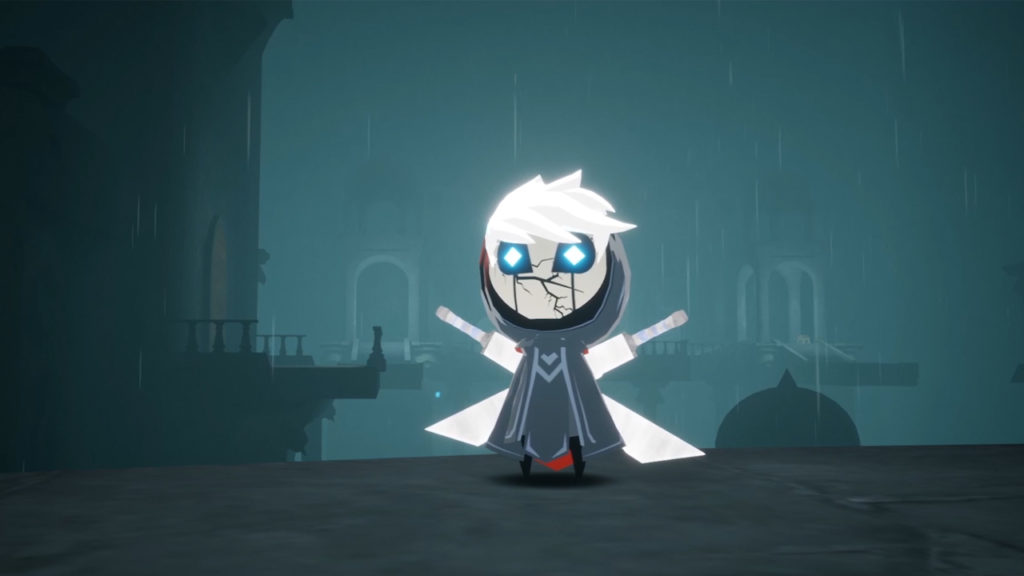 Much has been made about the similarities to Hollow Knight, and while at first glance you might wonder why, the truth is that something about Blue Fire does evoke Team Cherry’s side-scrolling platformer. It may be the aesthetic or the way the main character moves, or it may be in its deliberately obtuse narrative or millimetre-perfect jump-dashing. Either way, there’s a definite sense that Blue Fire has taken inspiration from a number of different games – but this is no bad thing, because the spin it puts on the action feels unique.

At brass tacks it’s a Metroidvania, and as you make your way through the starting area you’ll pass countless locked doors that proclaim fairly definitely that you ain’t going that way just yet. And so you’re funneled at first, along a path that sees you aiding a small group of weakening gods to fight back against the darkness. In return you receive a handful of new abilities as well as a few new outfits and weapons, and it’s not until around the mid-point that the Metroidvania element really comes into play, but by this point you’ll have a fair few hearts and you’ll have mostly mastered Blue Fire’s sublime movement.

Chaining jumps with your single, quite far-reaching, dash and learning to course-correct when you mess up a jump is very satisfying, and so the Void Challenges (special rooms that reward a new heart for reaching the end) become an absolute joy to take on, even if they do make you swear a little here and there. Almost all of the difficulty and challenge comes in the form of platforming sections or rooms you’ll need to overcome. The majority of the combat isn’t all that hard, until later in the game when you spend a lot of time fighting on the edge of moving or disappearing platforms. 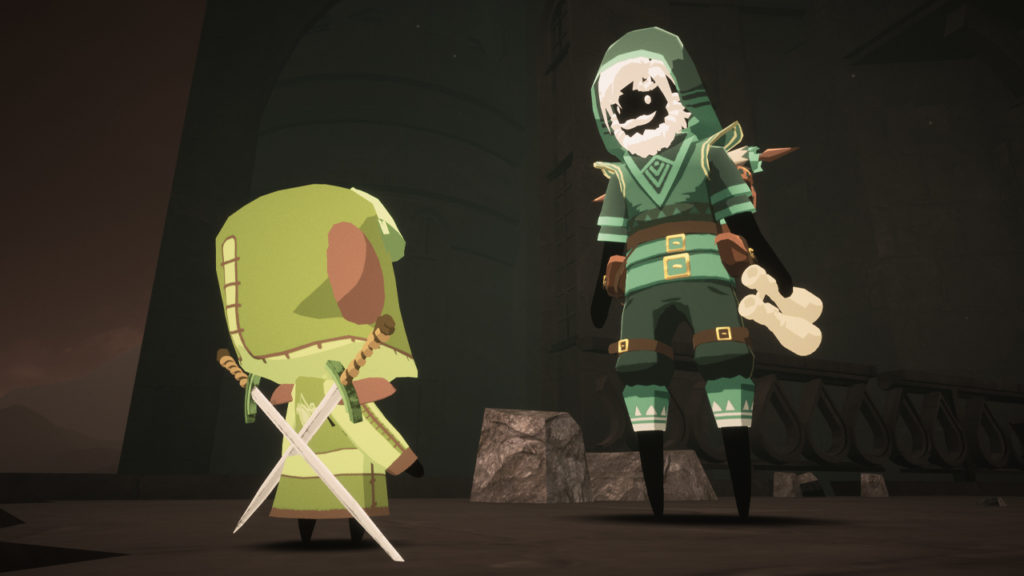 Fairly early on you’ll unlock the ability to launch little balls of blue fire (see?) at enemies, and also block incoming attacks with a short-lived bubble of energy. These two additions to your move-set make a massive difference in each combat encounter, allowing you to take on bigger and badder enemies, including the bosses. I rarely found the combat overly challenging though, spending more time swearing at the platforming than anything else.

Or, should I say, swearing at myself. The platforming in Blue Fire is, to ROBI Studios’ credit, super tight, and every time I died I knew it was because I’d cocked something up. Being able to dash in any direction even when in mid-air means you can leap off a ledge in one direction and kind of swing around corners by dashing, and it feels so fluid and responsive that it doesn’t take long to feel as though you’ve mastered it. Which is around the time Blue Fire starts hurling real challenges at you, such as platforms filled with spikes, enemies that explode in toxic clouds, and a multitude of different spear-based concerns to turn your little warrior into Swiss cheese. I had a particularly tough time early on learning to bounce off chains of floating blue diamonds, which kind of extend your jump and recharge your dash at the same time. 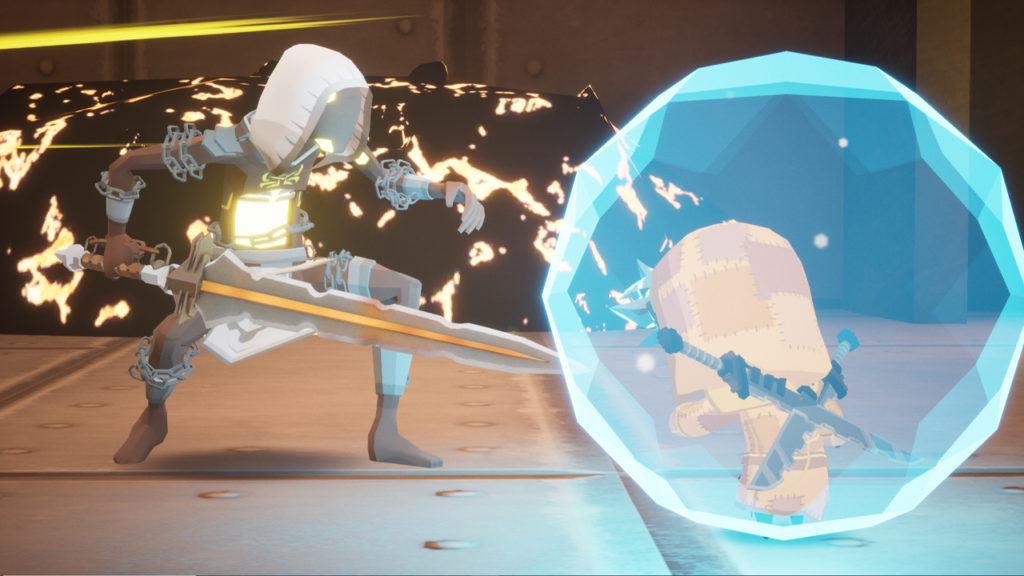 At a certain point, though, it does begin to rely quite heavily on backtracking, which doesn’t so much damage the experience as dampen it a little. I wouldn’t accuse the developers of running out of ideas but there’s a point where you’ve already unlocked all the abilities and you start to feel like you’re kind of going through the motions a bit. Blue Fire doesn’t outstay its welcome, exactly, but it’s a better game when you’re fully engaged in the platforming and fighting and it feels like you have a definite purpose. Even if you’re not always clear what that purpose is, exactly.

It is a pretty enough game though, with a nice clean aesthetic that doesn’t do a lot to trouble the Switch. The camera is not your friend though, partly because it steadfastly refuses to follow you like a stubborn dog that doesn’t want to go out in the rain, and you’ll have to manually adjust it, often mid-jump, to keep it behind you. It also has a tendency to sit naturally low, so you can’t see around or over your hero to adequately avoid death by the huge rusty Q-tip you’re hurtling towards.

This is a fairly minor complaint though and one you’ll learn to live with in time. Awkward camera aside, Blue Fire is an excellent adventure game with just enough flavour pinched from a variety of games across a plethora of genres and platforms. It’s a wonder that it doesn’t feel derivative, and instead manages to stand apart as a joyous adventure through a dark yet well-designed world.

Platforming is on point
Looks lovely
Lots to explore

Blue Fire is an excellent adventure game with just enough flavour pinched from a variety of games across a plethora of genres and platforms.