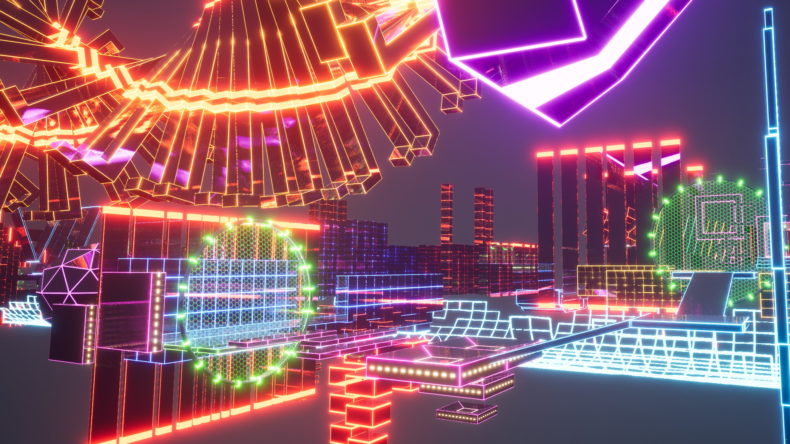 Somewhere between Super Monkey Ball and Golf With Your Friends sits the neon-infused Kinetic Edge. It’s a small 3D platformer where you take the role of different shapes trying to complete levels. It offers a reasonably fun base but not merely enough content to really keep you invested. Piled onto this are some occasionally mediocre levels and poor multiplayer matchmaking. With time, this could shape up to become something good but, as of right now, it’s a little square

After being greeted by the neon glow of the menu screen, you’ll be dropped right into the tutorial. This will show you the ropes whilst also showing how short that rope actually is. Kinetic Edge is a fairly simplistic game. You move with WASD, look around with the mouse, jump, boost and occasionally attack. That’s about all you are initially challenged with. This ends up killing a little bit of Kinetic Edge’s replayability. It’s rather simple and there aren’t quite enough modes and maps to keep you entertained for much longer.

The first mode you’ll likely try is Race mode. Complete with seven races using a variety of shapes, the entire goal is to finish getting to the top/bottom of a map in a better time than your friends. This is made much harder by the fact there are very few players. Finding a server is basically impossible. I had played this game before release but held off for a few days after to test them, but still could not do so. Kinetic Edge is a game that feels built with multiplayer in mind yet this is inaccessible for me right now due to very low player counts. 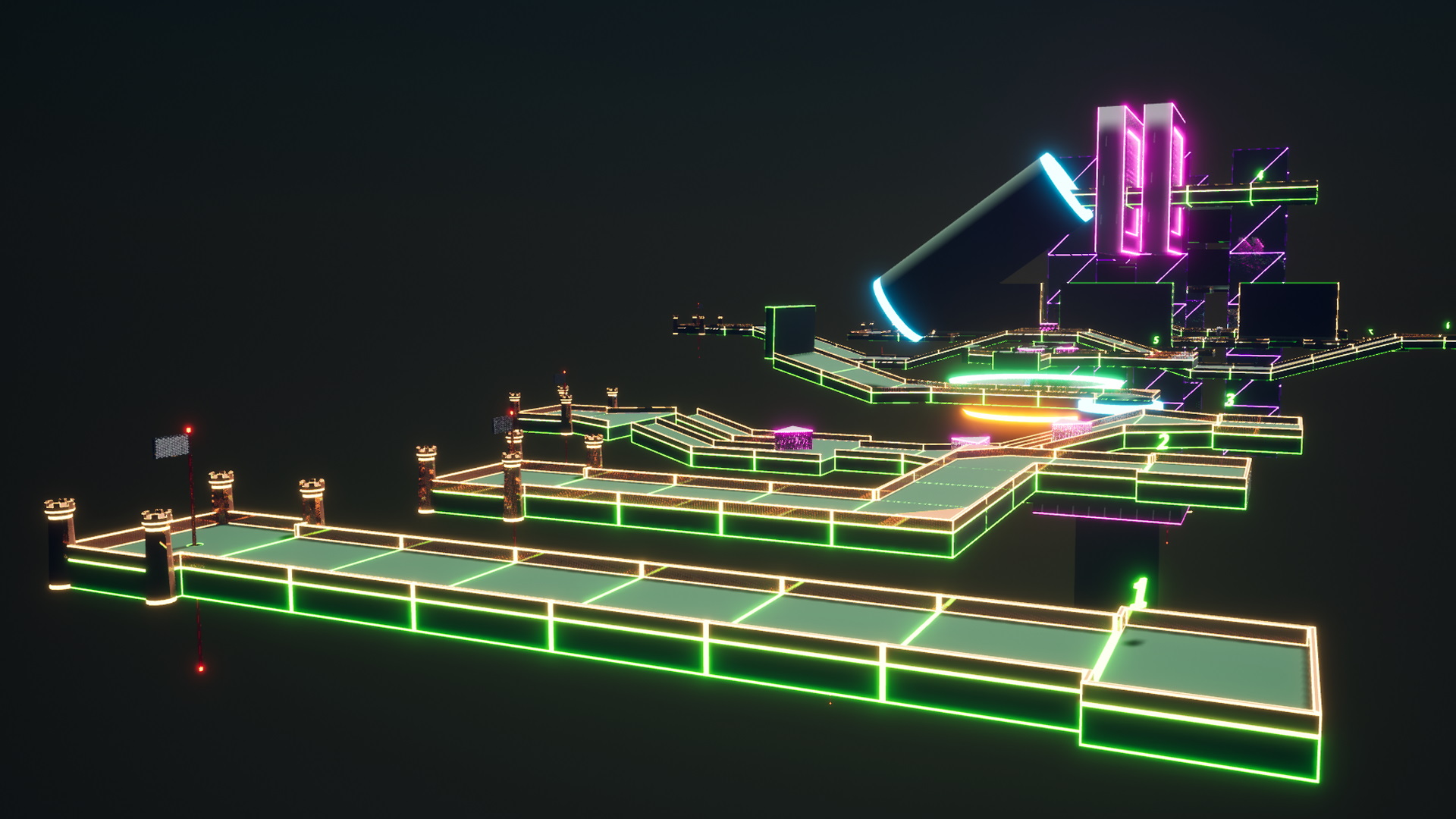 The races themselves are rather fun, having winding stairs, moving platforms, and reasonably tight jumps. Where Kinetic Edge is at its best is when your shapes are changing wildly and you have to adapt to the new movement. One moment, you could be a triangle clashing off every edge and another you could be a sphere, lazily gliding along the floor. Levels only take a few minutes to complete, but are generally varied enough in race mode to be interesting while you play them.

The same cannot be said for golf. The idea of batting shapes around to get par is fun but it just didn’t work as well as it could have. You can only putt once every time your shape stops. This often results in entirely crashing the golf when your shape gets stuck on an object or trapped floating in mid-air through particularly pesky jumps. Levels are too long in golf meaning a crash or glitch could mess up ten or so minutes of work. There’s also little creativity in the levels once you get past the first couple. Levels feel like they go bigger but not more interesting. This is a shame as a whacky creative golf mode could really tie together the modes on offer here.

This moves us to the maze mode. You initially land in a 10×10 square where you have to roll a ball through to solve it. Like Golf, the labyrinths on offer don’t tend to change up the design any more past the first one, only opting to go larger. The final maze you can play is a 50×50 square that took me just over 3 minutes to complete. I don’t particularly want to play the maze ever again. Its a nice extra mode, but doesn’t do enough to take up a quarter of the modes available. 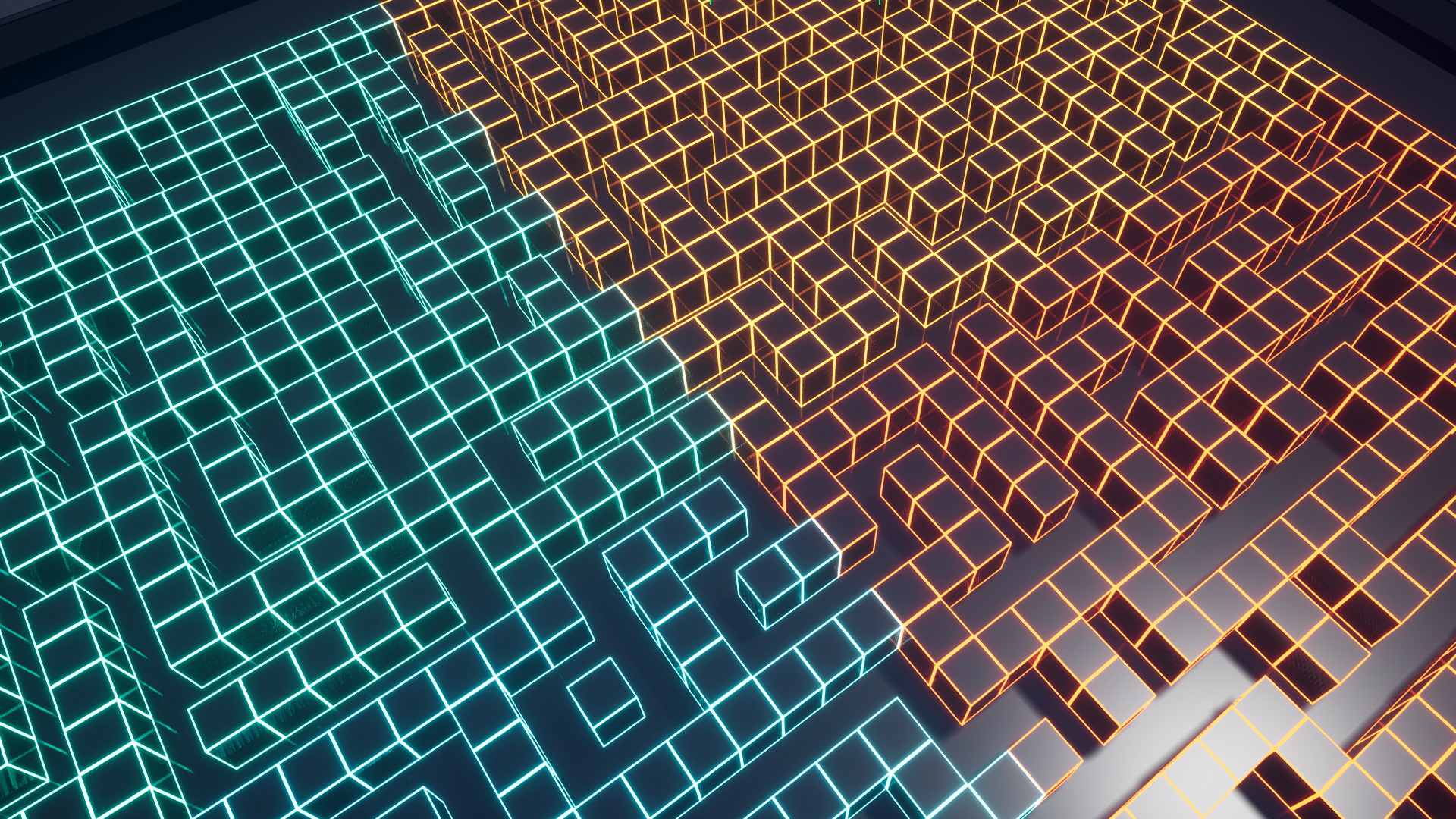 The final mode could possibly be the most interesting in a group dynamic, but alas, that doesn’t seem possible. Gauntlet has you take on a huge level with spinning motors, moving platforms, and plenty of tight spots. It seems designed to throw you off so you don’t get to the end. The reason for this is, every time you do, you must repeat from the very start. There is only one gauntlet mode but I can imagine this being the best mode long term.

There are a few things that all levels here, regardless of mode, suffer from. There’s this consistency to the style of the game with neon lights and cyber synth music but it fits this to a fault. The levels feel varied in style but not in mechanics. Whilst the backgrounds change, the actions feel the same. I didn’t really have a favourite level in Kinetic Edge. That seems to be a bit of its problem as a party game.

Kinetic Edge has a reasonable base but just lacks the rest of what could make this good. It’s a decent 3D platformer in desperate need of some more ideas and lots of new players. Its visuals are interesting initially but become a bit of an eyesore after extended play, and maps just aren’t varied or unique enough to make them replayable. Kinetic Edge feels like its fighting with itself just a little too much. While having more modes makes the initial menu screen a bit more vibrant – like Kinetic Edge’s visuals – that vibrancy becomes tedious and a little wasted.

Kinetic Edge feels like its fighting with itself just a little too much. While having more modes makes the initial menu screen a bit more vibrant - like Kinetic Edge’s visuals - that vibrance becomes tedious and a little wasted