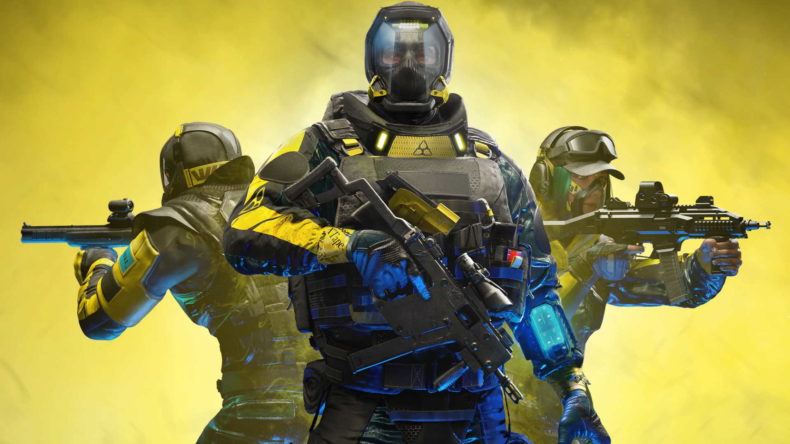 Before I begin this review of Rainbow Six Extraction I’ll admit that I only possess a limited working knowledge of Rainbow Six Siege. I did play it a million years ago when it first launched, but I also only watched two seasons of The Walking Dead and couldn’t tell you much about the current state of that either. Well, besides the internet being pretty negative about it, coincidentally.

And it’s not through lack of trying that my life has been pretty Siege-less for the last six years. I’ve attempted to enter the fray on many occasions, only to find the “community” about as welcoming to newcomers as the Korean Demilitarised Zone. Which is all the more frustrating because Siege is a game that genuinely ticks all the right boxes for me. Violent, tactical, teamwork-oriented gameplay is my jam. I’d rather pitch in with a team than drop into anyone’s battle royale map, let’s put it that way. 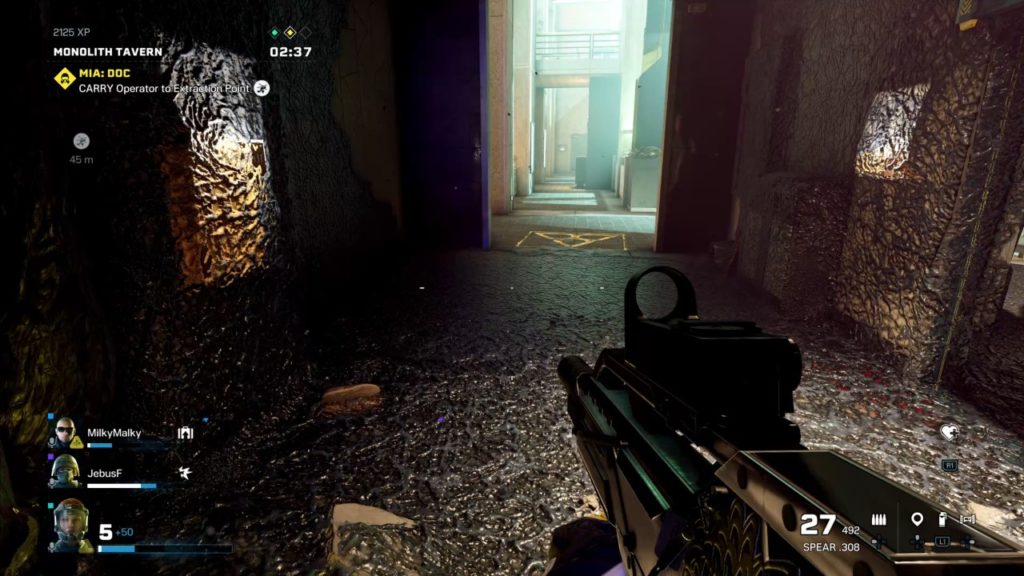 All of which left me scratching my head a bit at the prospect of reviewing Rainbow Six Extraction. Riffing as it does so confidently from Siege’s playbook, I assumed you’d need at least some prior knowledge of the franchise to get to grips with it. Happily, you don’t. Even more happily, this is not – at least at the time of reviewing – the usual Ubisoft fare either. If you’re expecting another convoluted whale-farm designed to extract money from fools, you may be pleasantly surprised.

It’s been a while since they released something that wasn’t a variation of the by-now patented Ubisoft Sandbox. There’s no laundry list of tiny icons to grey out spread across exhaustingly vast play areas. Extraction borrows a great deal from Siege, and presents a series of tightly-crafted, compact maps, brought to life with an impressive roster of mission objectives, Operators, and enemies.

CHECK IT OUT: Rainbow Six: Extraction | 15 minutes of gameplay

The story is fairly unimportant in the grand scheme of things, but is a nice way to combine Siege’s world with this one. It follows that an alien parasite has invaded Earth, destroying cities and bringing civilisation to the brink of annihilation. These alien creatures, the Archaeans (or Archies, for short) spawn in multiple varieties from pupating egg-like Nests and kill whatever they see. In response, a small selection of Siege’s tactical combat specialists have been brought together to form REACT. Headed by Mira, Elena, and Thermite, it comprises a small group that will likely grow in time depending on Extraction’s success. 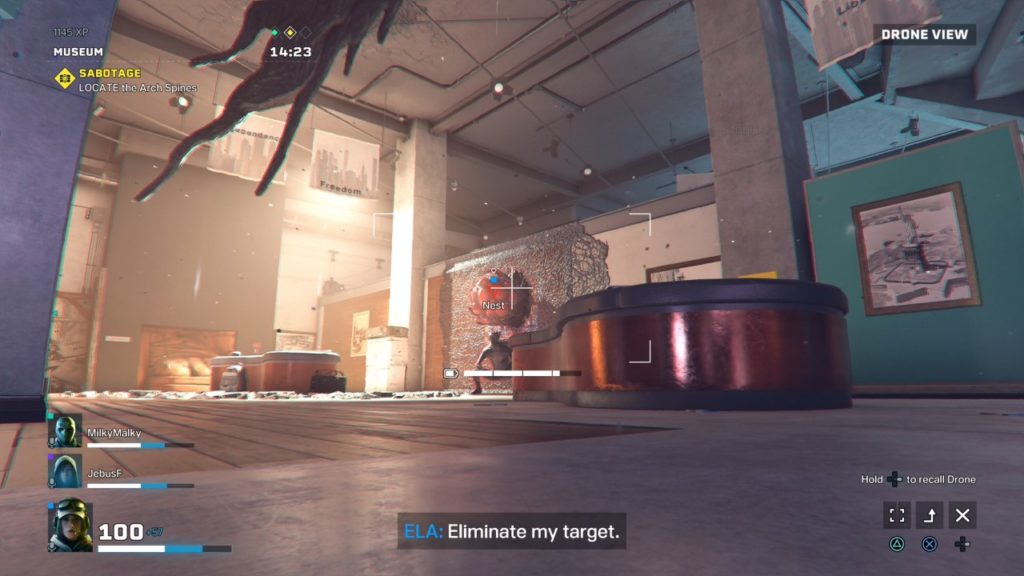 I say “small”, but in actual fact there are 18 Operators in total (9 to begin with, and 9 to unlock), offering a broad spectrum of skills and weapons to take into the Incursions with you. Each Incursion is split into 3 distinct missions, separated by sealed airlock doors. You have the option to extract at any time by reaching the helipad and calling in the chopper, but the more objectives you complete, the more XP you bank.

We don’t leave our people behind

There are around a dozen different mission types in Extraction, set across plenty of maps in geographically diverse locations. The mission line-up is randomised each time, so you’re never sure exactly what you’re going to get. They range from missions like Biopsy, which tasks you with stealth-killing a particular enemy, to missions like Rescue, where you’ll need to find an NPC and escort them to the Extraction Point.

Each mission allows only 15 minutes, and when time is up you’ll lose your ride out. If this happens or your Operator is downed for whatever reason, one of the objectives in the next Incursion will be an Extraction. Your Operator will be covered in a protective yellow foam, but they’ll need saving before the Archaeans can absorb them into one of their Arch-Trees. You’ll need to find them and free them to use them again. 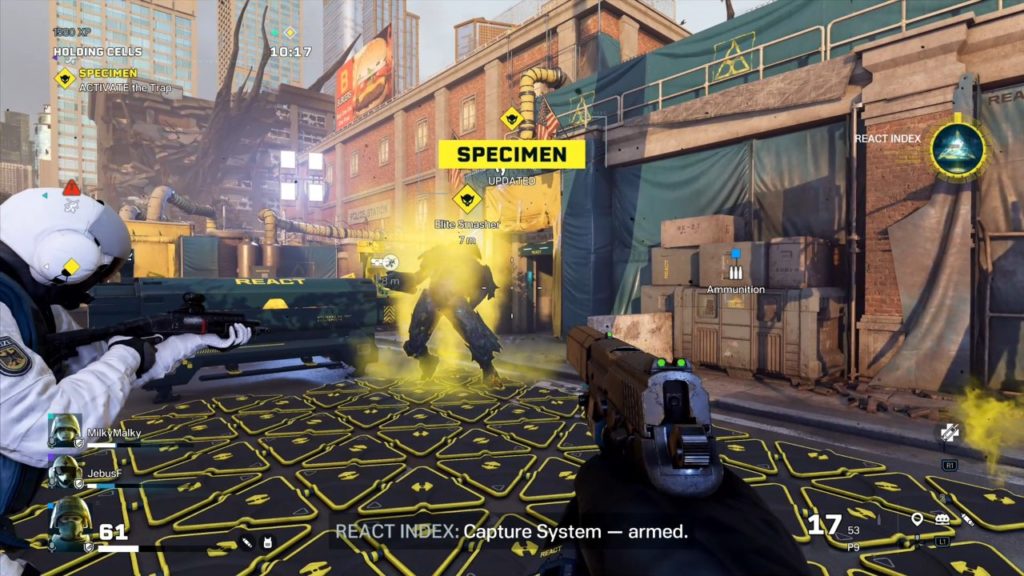 It’s worth noting that not only will the rescued Operator be out of commission for a few Incursions, but also any Operator who sustains significant injury during a mission. Their health is returned slowly, based on how much XP you manage to bank in subsequent Incursions using different Operators. Each one has their own weapons to unlock, stats and skills to upgrade, and abilities to take. Only cosmetics are universal, and so far there seems to be an awful lot to unlock in-game before you even meander to the store-front.

Get to the chopper!

Rainbow Six Extraction is an incredibly tactical game. It requires constant communication and absolute concentration, even on the lowest difficulty setting. Your Operators can’t tank more than a few hits even from the lowly Grunt enemies, and if one of you goes down and can’t be revived, someone is going to have to carry them out of the Incursion or leave them behind and necessitate an Extraction.

As a consequence, everything you do matters. Miss an enemy and someone takes a hit? That’s on you. Take the wrong gear into a mission and find yourself next to useless? Your fault again. Each Operator has something useful to bring, but different Incursions call for different skills. Alibi’s Decoy might be great for keeping enemies occupied during Sabotage missions, but if you’re trying to lure a rampaging Elite back to the Extraction Point, Finka’s Adrenaline Rush is almost essential. 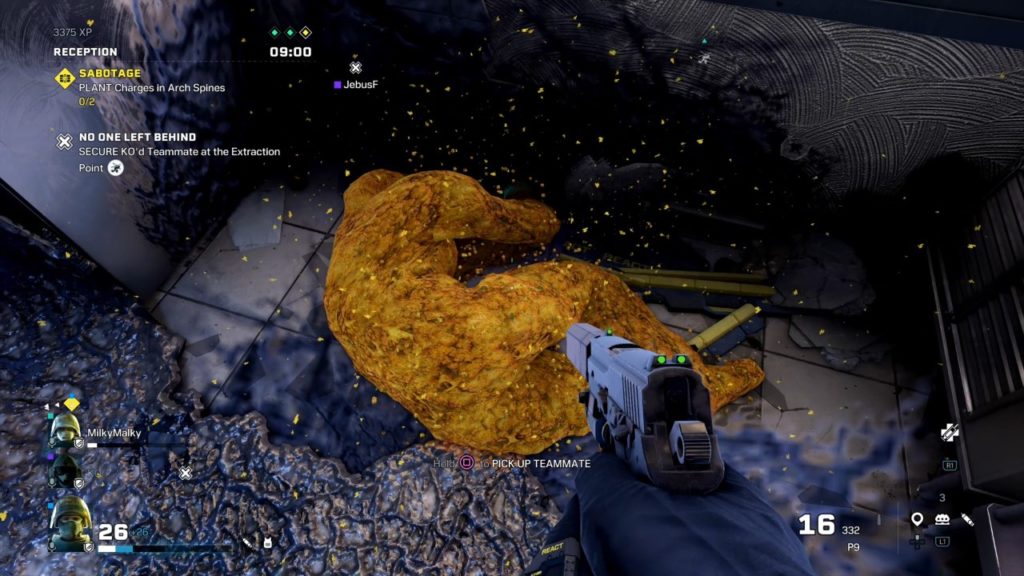 A very limited number of Operators can heal the team or provide armour. And in fact, healing isn’t really healing. Any gained or given Health counts as a “boost” and will slowly degenerate over time. Several Operators have Recon devices that allow you to spot nearby enemies or REACT gear, and if you’re not taking the standard issue Drone into an Incursion, some other form of Recon is so utterly important that it’s not even funny.

Where this could quite easily have been something hastily thrown together, Rainbow Six Extraction instead feels incredibly nuanced at times. The first time you choose to play alone, a full cutscene plays in which Thermite authorises solo Incursions. Even though enemy placement and objectives are procedural each time, objectives adapt to the number of players that load in. A lot of thought has gone into this game is what I’m saying, and it shows.

Perhaps the biggest issue is that playing solo is much less satisfying and rewarding. Yes it becomes incredibly tense, and that 15 minute timer seems even tighter when you’re doing all the Recon yourself and you’re stealthing everywhere. But a massive element of the core gameplay is lost when you play alone. There are no AI companions here. Even lumping in with random players is no good if they’re not using a mic (the Ping system just doesn’t cut it alone) or they’re not working as a team. And you can’t trust strangers not to just leave you to your fate if the going gets tough. That said, the crossplay between console and PC works like a dream, so that’s something. 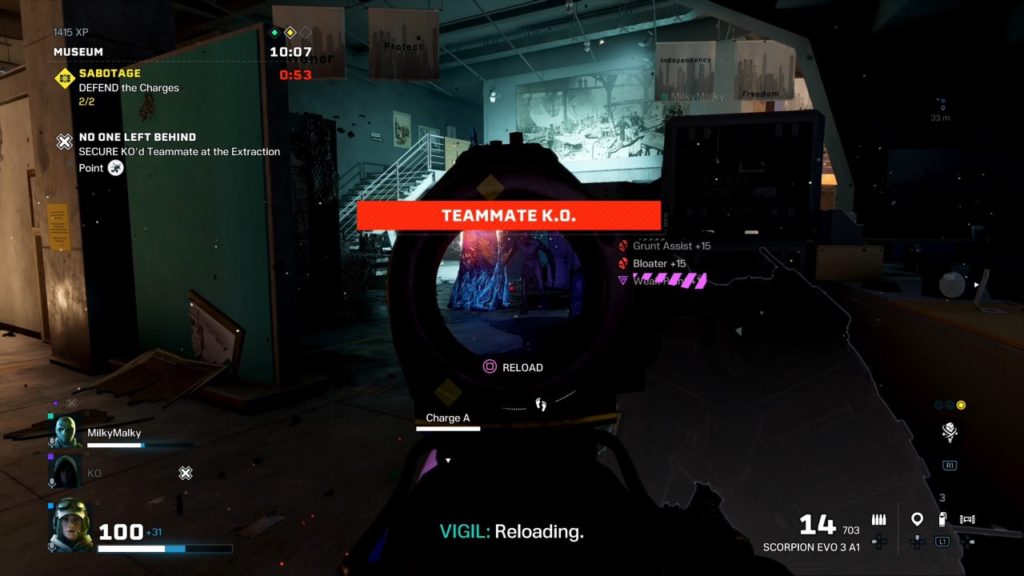 Ironically, some of the best moments I’ve had have been where it’s all gone to shit. The enemies are pouring in left and right, someone is down (usually Adam), and you’re abandoning the mission just to make it out with everyone still active. At higher levels, this happens a lot, and it’s thrilling every time.

It’s so easy to startle the enemy and have them screaming the place down, waking up the dormant Nests and bringing every enemy in earshot to your position. Some run, some crawl up the walls, others can travel via the Sprawl, the endless black goo that covers everything and slows your movement. There’s a sense that you must always be on your A-game, and anything less will result in the loss of an Operator and whatever precious XP they’ve banked.

There is an endgame component, too, referred to as the Maelstrom Protocol. These Incursions pit you against the toughest enemies the game has to offer, with multiple Objectives and greater rewards. They also require specific Operators at specific levels, and call for a much higher level of mastery. Ultimately though, Extraction could do with rewards that aren’t all cosmetic. Rare weapons or limited use items as rewards for tougher objectives would be good, because cosmetics really are the least of your worries once the shit hits the fan. 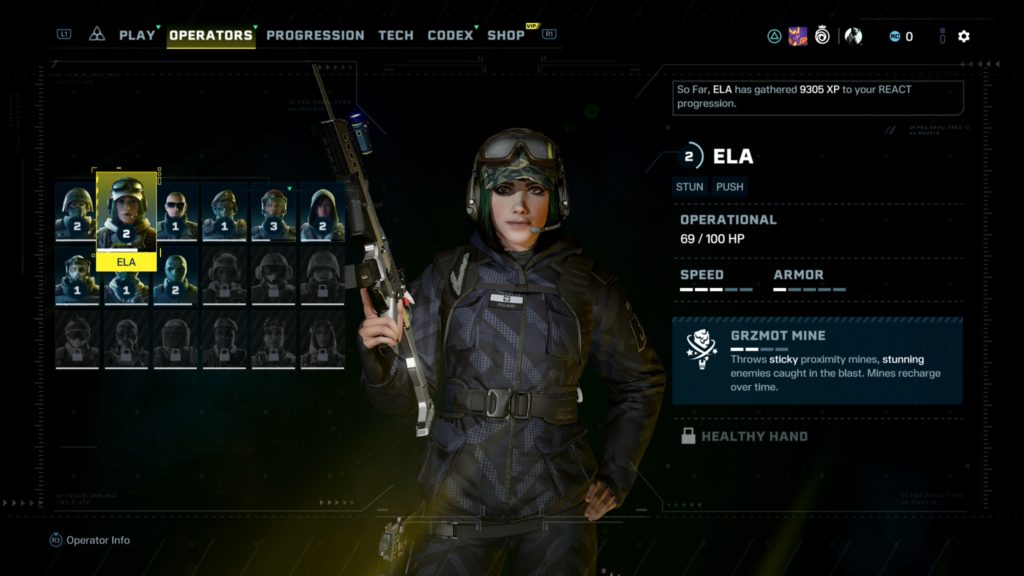 If there’s a complaint to be made it’s that Extraction is not always consistent with its rules. For instance you can clear an area of Nests and enemies, yet if the mission type calls for it, enemies will spawn in anyway. Yes, there needs to be challenge in a game, but often at other times a clean sweep of a mission area is enough to guarantee some respite.

It also doesn’t hold your hand much, allowing you to work most of it out from instructions delivered in-mission. I missed out on a lot of XP early on because I hadn’t realised that there were optional challenges to complete called Studies that award a big chunk of XP each time you complete them. Also, progression can feel very slow at times if you’re not hitting all the objectives, and failing will remove a considerable chunk of progress.

CHECK IT OUT: All the confirmed titles coming to Xbox Game Pass in 2022 so far

These are pretty minor complaints though. Rainbow Six: Extraction is a tightly crafted, surprisingly deep game. The balance is on-point, honed over the last half decade building and tweaking Siege, and each Incursion is a tense, joyously cathartic affair. It’s also a stark reminder of what Ubisoft can produce when they step away from the usual slew of admittedly very decent sandbox games for which they’re better known.

Rainbow Six Extraction has legs, too. There’s currently a staggering 62 Operators in Rainbow Six: Siege, all of whom could potentially be drafted in here – with new ones besides. And the Development Milestone progression line looks an awful lot like a battle pass to my cynical eyes, so I can already envision multiple seasons of Extraction going forward if it’s successful enough to warrant it.

It remains to be seen how the Siege community will respond to such a different arena for their favourite Operators, but Extraction also has the potential to bring in a whole new audience. Explosive, exhilarating and endlessly entertaining, Rainbow Six Extraction is arguably Ubisoft at their best and most confident.

Progression can feel slow
Not so great for soloists

Explosive, exhilarating and endlessly entertaining, Rainbow Six Extraction is arguably Ubisoft at their best and most confident.