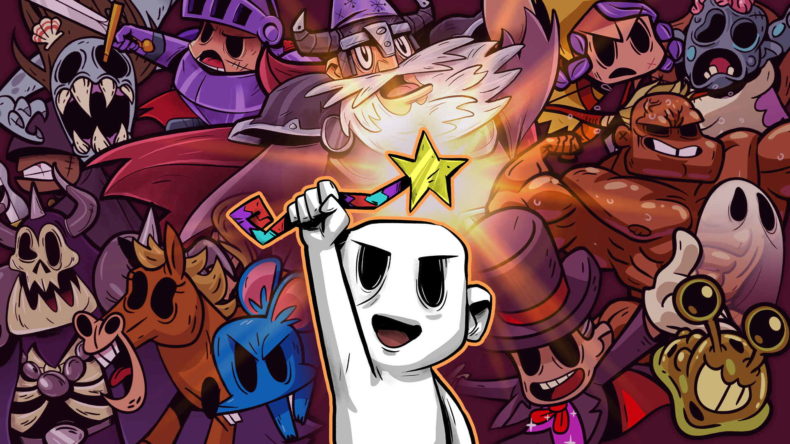 DrinkBox Studios certainly know how to make odd games. The Guacamelee titles, with their Mexican wrestling themes and wry humour were certainly something different, especially when the original first hit the scenes. And make no mistake, their latest effort, Nobody Saves the World is definitely different, weird, and odd. Drinkbox has clearly got another hit on their hands, even if the bonkers is dialed up to 11.

Nobody Saves the World sees you star as the titular “Nobody” who has woken up with the oft-trodden video game trope of amnesia. So with great haste, you make your way to a nearby wizard’s house to seek help and advice on what to do next. Within minutes (and a few comedy conversational exchanges later) you find yourself in possession of a mysterious staff. This is the key to your adventure. With it you can transform yourself into various forms to aid you in your quest. The first is just a lowly rat, perfect for squeezing through tight spaces, and whose gnashers love nothing more than chewing up enemy health bars rapidly and inflicting a poison status for good measure. But before long you’ll unlock more forms such as a horse, slug, and even a bodybuilder. Each form has its own movesets and playstyles to explore.

The top down 2D world is reminiscent of the early Zelda titles. You’ll hack and slash your way through numerous on-screen enemies, and tackle dungeons (some necessary, others optional) dotted throughout the map. The art style is gorgeous. It opts for a cartoony aesthetic, yet still manages to feel modern and relevant. Clever use of ambient light or torchlight through the varied landscape help add to the environments, which are full of colour, life, and detail. Dungeons and map areas feel different, right down to the zany and varied fixtures and fittings in each, giving each a unique feel. Animations are smooth, full of dramatic flourishes and particle effects when performing abilities or switching your form. Everything looks lovely, and has that kind of timeless quality that you know will still look lovely and polished, years from now. 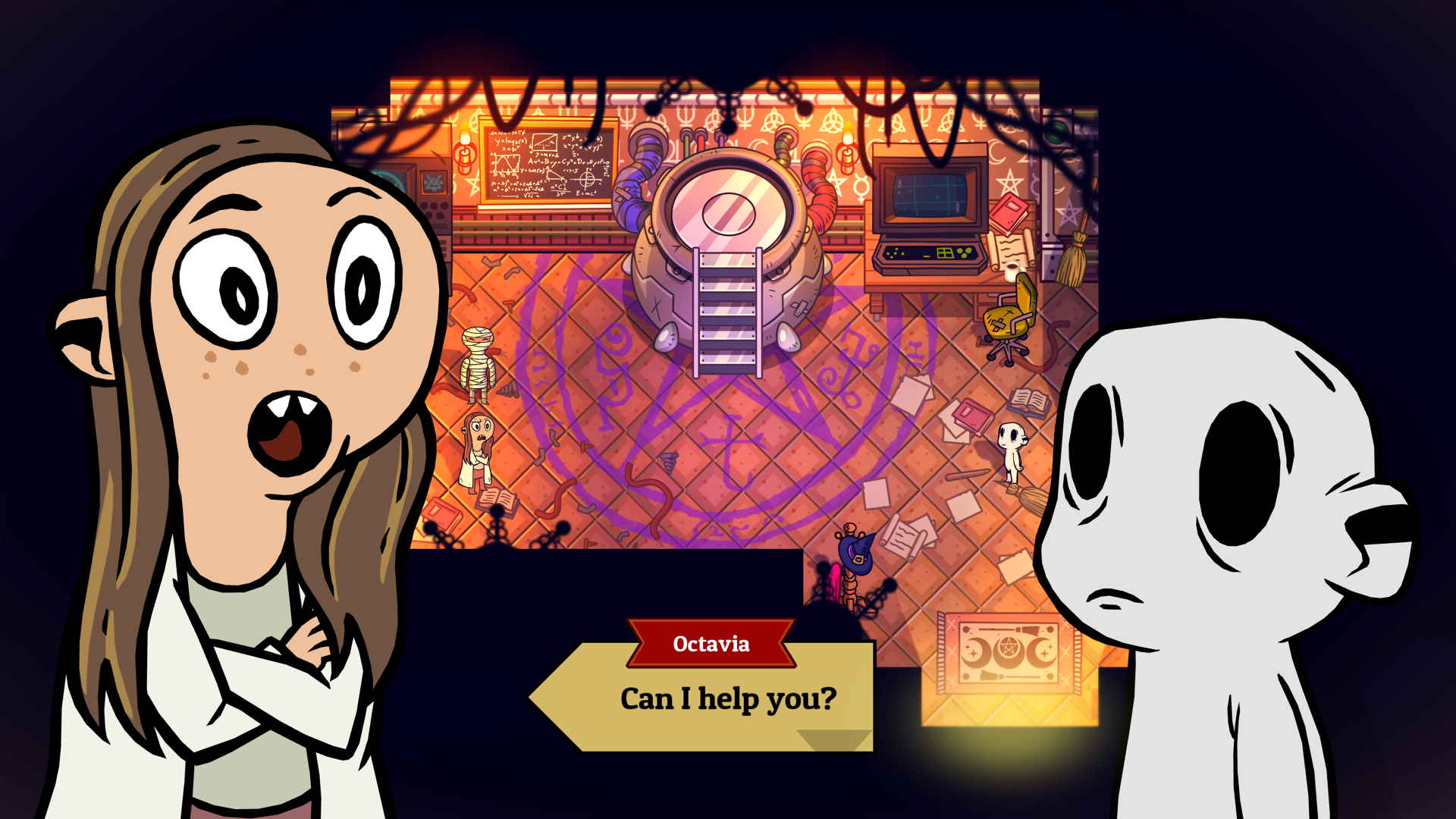 The biggest draw of Nobody Saves the World is the variety on offer. Whilst the overworld map and quests are fixed, every dungeon is randomly generated upon entry, meaning you have to be on your toes at all times as you explore. And this is whilst managing through the 18 forms you can unlock throughout your adventure. They’re all different shapes and sizes, have different hitboxes, stats, and abilities to their name. Each one can gain its own experience, as well as XP that you acquire generally, meaning you level up as a central protagonist, increasing your overall stats. Each form has individual quests to complete to rank it up, and doing so unlocks more abilities and further quests based on them. It means you’re always progressing and earning something as you play, even if you’re just exploring away from the direct story path.

But Nobody Saves the World is so much more than a toolbox of forms to have fun with. The quests themselves are cleverly designed to not only get you trying out new abilities at face value but also understand how you can start using them together for your advantage. With the rat for example, you’ll learn its “gnaw” move right away which can poison foes with enough hits. The first quest will just ask you to damage foes, whereas the next one will require you to actually fully poison them. You soon understand there are different ways to achieve victory. These quests help you understand what’s possible and give you a nudge in the right direction, to let you go and experiment for yourself. 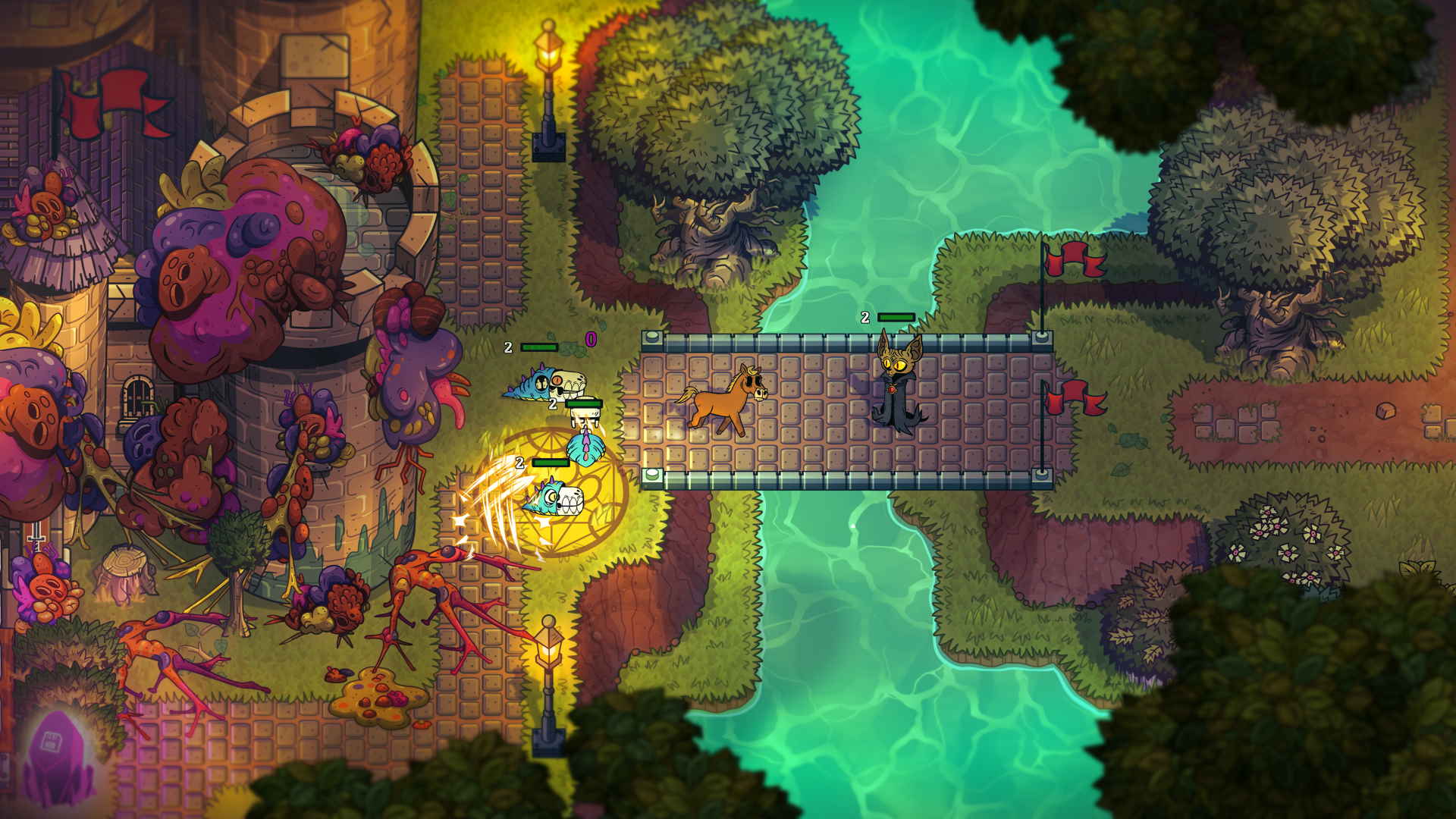 And then DrinkBox takes that idea and elevates it to another level. At a certain point in your adventure, you’ll unlock the ability to mix and match the different skills applied to any of your forms with any you’ve discovered so far. Now, rather than learning how a form works, you can explore creating your ideal form to deal with any given situation. Now you could have your horse kicks become poisonous or a turtle fire arrows: the world is your oyster. Creating the perfect loadout is now at your fingertips. And it’s all intentional, as at that same moment you unlock mix and matching, you’ll unlock a load more quests which require you to customise your forms in certain ways and kill enemies with them. Again, you’re always progressing and always rewarded.

It means Nobody Saves the World got me going against my better judgment. In games where I have a choice of characters or classes, I’m one of those that’ll max out and perfect one before moving on to the next. But here, I was drawn to different forms, because they each feel different. They all offer something new, and unlock different abilities that would add to my pool of options to create my preferred loadouts. Kudos to any game that can do that, and so effortlessly too, which is testament to the balance of forms; the dopamine hit of completing quests, and frankly how much there is to see and do and tweak here. 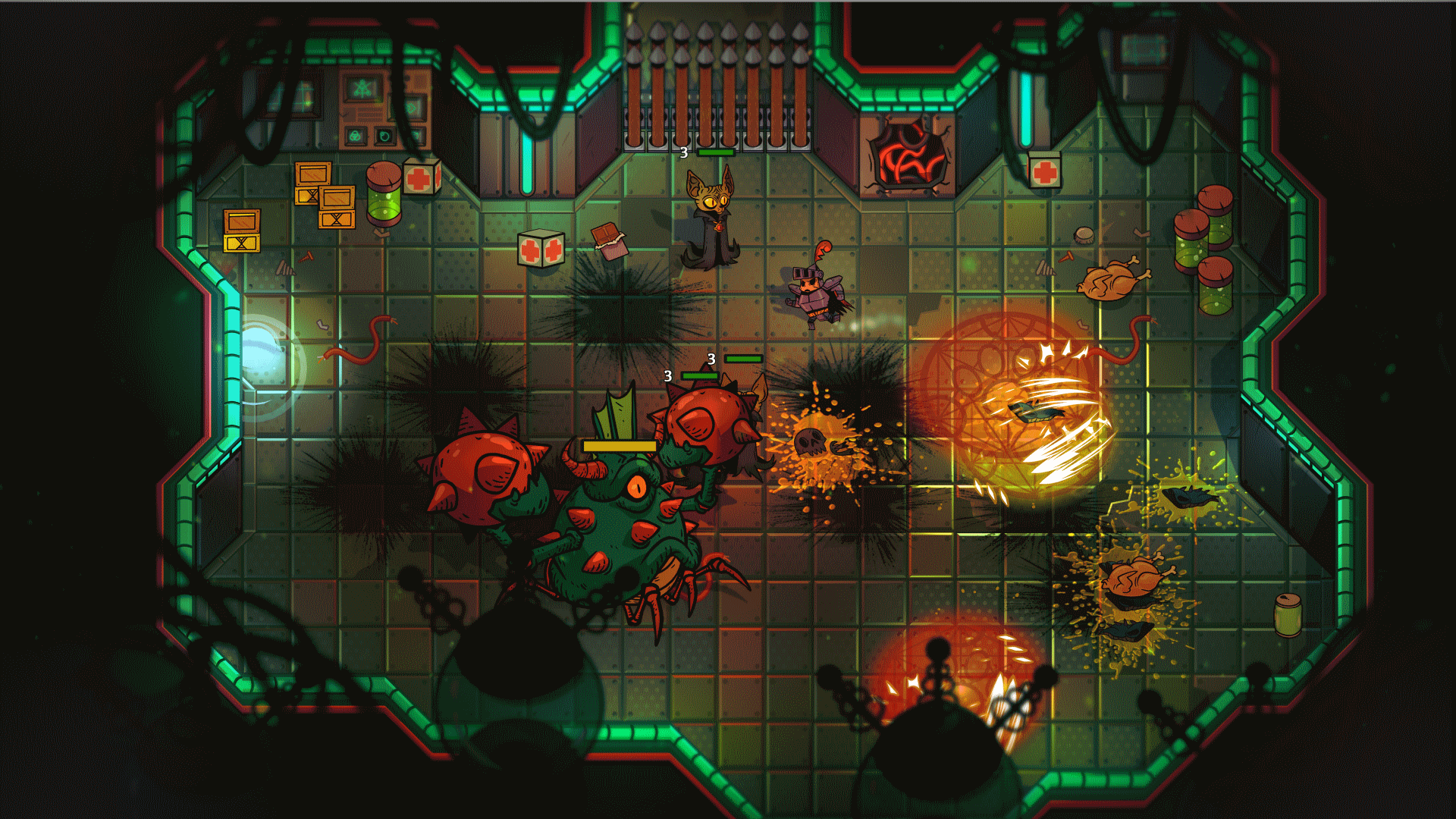 The witty humour of the Gaucamelee games is back here, and the best parts of it too. Nobody Saves the World is a funny game, in an understated, non “try-hard” way. Jokes effortlessly land because of the world, situations, forms; everything is bonkers, so daft humour fits the tone perfectly. But nothing feels forced. It’s effortless humour that’ll make you chuckle or smile. No splitting sides here, but it doesn’t need it. Conversations and banter take place in double-down cartoony versions of the characters in close-ups with over-dramatic, almost deliberately old-school speech animations. I got Day of the Tentacle vibes whilst watching, and for all the right reasons, thankfully.

In terms of your adventure, you can expect a challenge. The game throws hordes of different enemies to overcome, different damage types, as well as status effects and even dungeon modifiers that make certain dungeons unique challenges all on their own. It’s not a walk in the park, but you can get overwhelmed by a swarm if you get too cocky. Save points are liberally dotted across the map though, so you’re never very far from where you died. 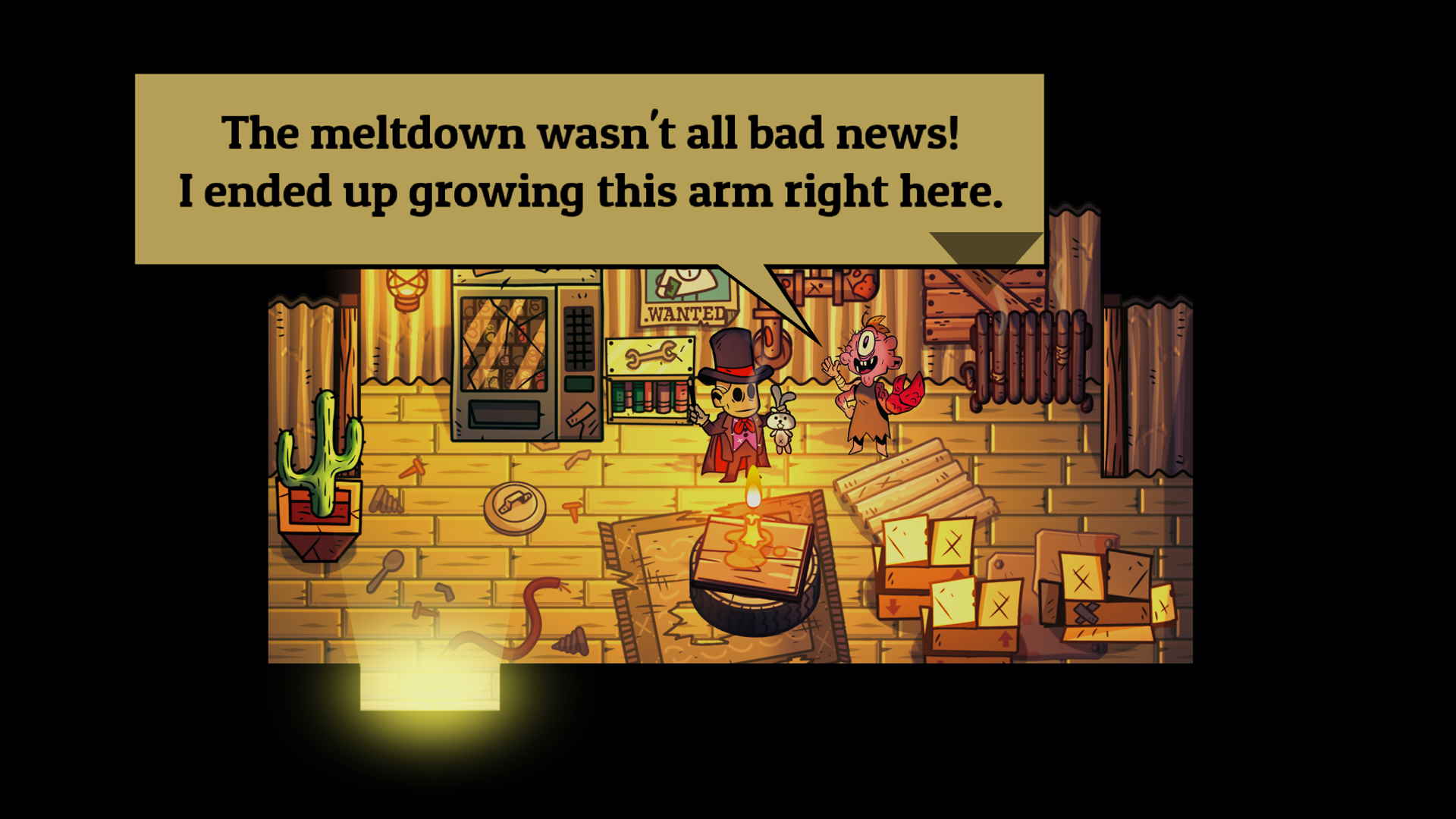 There’s also no penalty for death, as even quest progress carries over. Dungeons are the only areas where you’ll need to go through without dying, making them a touch more demanding. In most areas, enemies also level with you. This means even if you grind form quests to unlock abilities, this doesn’t break the game. You’ll still be fighting decent level enemies by the end of the game.

A triumph alone, or with a friend 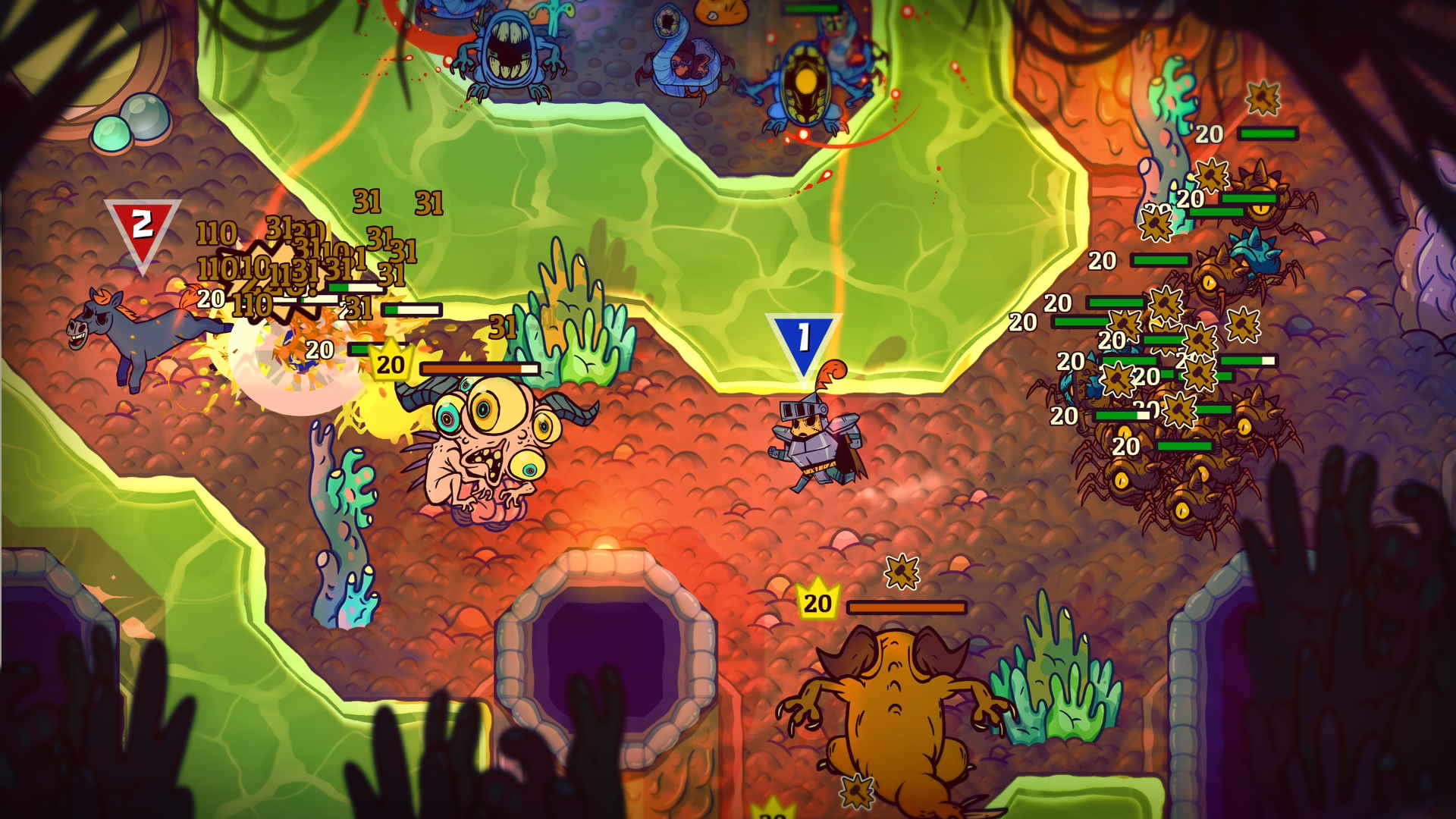 Nobody Saves the World is a single-player adventure, but fully playable in co-op as well. Another player seamlessly drops into your adventure from any point and can help you out. There did seem to be a few lag issues when there were a lot of enemies on-screen when playing online. But it was infrequent and didn’t make the game unplayable by any stretch. The co-op is a great way for you to test complimenting abilities together before applying them to a singular loadout. You’ll also level up forms quicker as you can complete twice as many form quests at once if you’re clever. There doesn’t seem to be a difficulty multiplier for online, meaning it does feel a little easier, but again it doesn’t ruin the game in any way, and co-op is a fun and rewarding experience.

Nobody Saves the World is a triumph. It takes a simple, familiar genre, and packs it full of so much variety, versatility, and wholesome fun. It grabs you right from the start and doesn’t stop until the credits roll, and then you’ll want to jump right into new game plus. It’s a meaty, challenging, funny adventure that begs to be explored, experimented with, and rewards you for doing so. This is DrinkBox Studios at its absolute best, and a game not to be missed.

Forms offer plenty of variety and fun
Lots of depth to combat and load-outs
Lovely, visual aesthetic
Funny, and just fun to play

Nobody Saves the World is a superb adventure, with lots of to see, do, experiment with, and have lots of crazy fun whilst doing so.