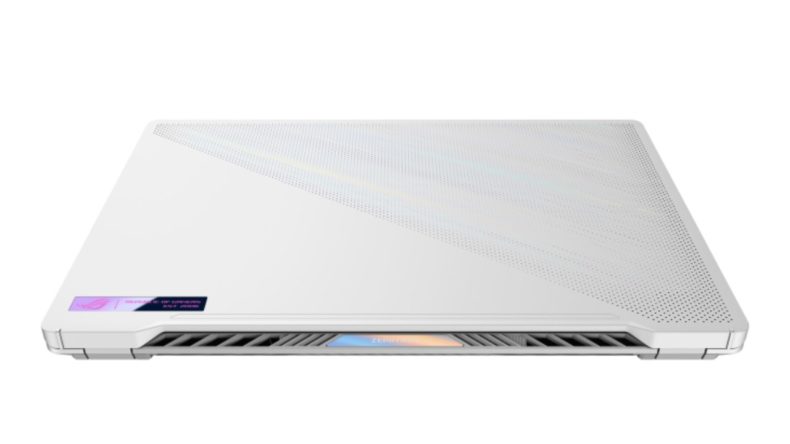 I’ve never been a big fan of gaming laptops in general. I haven’t used what you’d consider a “top end” one for quite some time, and always found that the ones I did use struggled with battery life, temperature, and often, visual oomph. Having now spent some time with the Asus ROG Zephyrus GA503QS, I’ve come away very impressed. I won’t be replacing my desktop any time soon (partly because I can’t afford to spend £1800 on a laptop right now, if I’m honest), but it’s a powerful little machine with great visuals and incredible sound quality.

While there are 3060 and 3070 configurations available, the model I’ve been using is 3080, which is very impressive but comes in quite a bit pricier than the former. I’ve mainly been using it to run Destiny 2 through Steam, which isn’t the strongest test of power, but have also jumped into some Hitman 3 and, just for the hell of it, a little Cyberpunk 2077. 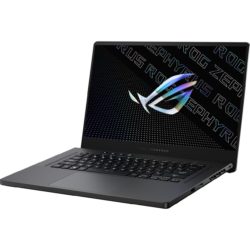 I’ve had no problems running anything, certainly not that I’d put down to hardware, anyway. In fact the only issue remains the temperature of the device itself. Running it with or without the cable attached sees it heat up fairly quickly. Using it on your actual lap becomes uncomfortable fast.

But this is very much a gaming laptop. The lack of an on board webcam seems almost incongruous in this age of Zoom calls and Skype meetings, a clear indication that this is a device designed for gaming on the go, not conferencing. The lightweight frame supports this, coming in at just over 5lbs even with the cable and power pack. It’s built for commutes and coffee shop tables.

There are plenty of ports too, so it does have the diversity you need if you want to make it an all-purpose machine. It just feels like using a laptop like this for a chat with mum and dad is almost a waste of what it can do. The more expensive 3080 model is somewhat future-proofed too, and will run any game you want and whatever settings you want at the cost of core temperature and battery life. That said, the battery is pretty decent.

Outwardly, the GA503QS is a sleek, well-designed piece of tech. I’m not a fan of the white finish; in most households its going to gather dust and dirt much easier than it would in black or grey (which is also available). But there’s a minimalist feel to it, all clean lines and shiny flashes of alloy. It looks and feels top-of-the-line, which is important to some. If anything, the main issue with the aesthetic is that all the ports are on one side of the laptop. 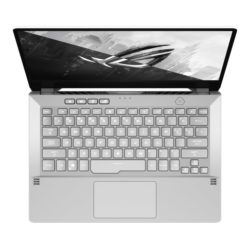 The Asus Zephyrus GA503QS is designed to sit elevated so as to allow the hot air to expel underneath and around the device more evenly than models that simply blast the hot air out in one direction. The trade-off here as that almost all the ports (bar a solitary USB port) have been placed on the left side, making for a jumple of cords and wires of you are using it with extra storage, headset, mic or webcam. It’s not a deal breaker, but it makes a standard set up look noticeably lopsided.

Whenever I use a laptop to write I miss the clickiness of a standard keyboard, and I’ve never been much for track pads as opposed to using a mouse, but the GA503QS excels in comfort. There’s plenty of space for my wrists, the keys have nice buoyancy, and the trackpad motion is smooth and responsive.

On the whole, despite the lack of a dedicated webcam, this is a pretty feature-rich device that will suit most people whether they’re gaming or working. The addition of 6 (count them: six) speakers means that this laptop gives out excellent dynamic sound, another reason it works so well as a games machine, but that’s just as useful if you like to listen to music or podcasts while you work. The lightweight, classy design means it won’t look out of place on a desk, a coffee table, or your lap.

But do beware of those temperature spikes, and prepare for some noise when the fans kick in to compensate. You’re not going to find many better 3080-enabled laptops with the same combination of sound output and battery life, meaning that for high-end gamers on the go, the Asus Zephyrus ROG GA503QS is a solid choice.

No webcam
Gets hot pretty quickly