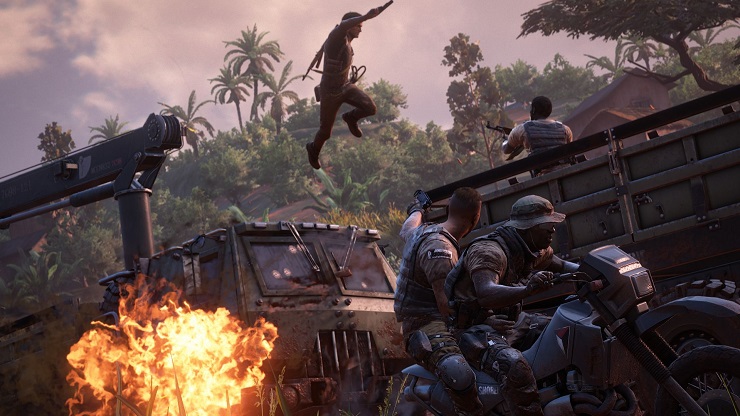 This year has been good to us gamers, hasn’t it? We’ve had The Witcher 3’s Blood and Wine expansion which puts many full games to shame, Salt and Sanctuary, Uncharted 4, the ridiculously fun Overwatch, Forza Horizon 3, and many, many more. Sure, there were some disappointments and a few months without much to shout about, but every industry has that. The main thing to take away from 2016 is how good we’ve had it.

You know what? It hasn’t just been 2016 that’s been good to us. This whole generation, despite its rocky start, has already given us far more quality than usual. In its first three years, we’ve seen several classics from AAA studios and the influx of independent developers has also blessed us with a ridiculously varied catalogue of games that easily match the quality of those created by the biggest names in the business. This combination has led to a massive array of games on both PS4 and Xbox One already, and I haven’t even touched upon the Wii U yet.

Nintendo’s machine, as far as I’m concerned, is definitely a part of this console generation. Its third party support may have been lacking and its lifespan may have been cut short, but many will support the claim that its exclusives are among the finest available on any machine. Mario Kart 8 and Smash Bros are fantastic party games, the latter being an excellent addition to the competitive scene as well; Super Mario 3D World and Mario Maker prove that Mario’s platforming adventures are still as relevant as ever, and the creation tools in Mario Maker are exquisite. There’s also the criminally overlooked LEGO City Undercover, which is one of the best open-world games out there. Obviously they aren’t the only exclusives; there are too many to mention and pretty much all of them are of the highest quality, so it’s a shame that the console’s cycle is about to end. But hey, the Switch is just around the corner and its potential is huge! Whether it will attempt to compete with the PS4 and Xbox One is unclear (unlikely, given Nintendo’s usual stance), but as long as its games are good, who cares?

The PS4 and Xbox One have both had dozens of top quality games at this point, both exclusives and multiplatform titles, which have been a blessing in a couple of ways. On the one hand, this has meant there has been a steady stream of entertaining games from both big companies and indies, giving us more to choose from than ever before. On the other hand, these titles all releasing in just three short years has meant that some haven’t sold as well as they could have at launch.

This isn’t exactly a blessing for the gamemakers, but it has meant that game prices are dropping faster than ever and this more affordable level of gaming means that more people can play newer games without having to wait months for price drops. In the long run, this means that sales may not be as high at launch, but they’re continuing at a more steady rate thanks to sale prices – and not just at a retail level; Xbox Live and PlayStation Network sales are a weekly thing now, bringing them in line with the likes of GOG.com and Steam on PC. Digital sales are a lot higher this generation, with every big title launching online as well as on disc, as long as you have the internet to support such big downloads, of course. Their prices aren’t as competitive as at retail, but discounts and sales are a lot more frequent, and with external hard-drives being readily available for both consoles, the convenience factor of not having to change discs is undeniably appealing.

Let’s not forget the likes of Games With Gold and PlayStation Plus, offering free games every month for those paying their online subscriptions. It’s easy to complain about the quality of those titles (we’ve all done it), but there have been some stunning games available, and they’re a lovely bonus for those paying for the online benefits on each console. Then there are the extra discounts provided for subscribers during sales, sometimes offering up to 50% off digital products, again offering earlier access to newer titles, to those unable to afford the hefty £50 launch price tags.

With digital also comes the benefit of backwards compatibility; Xbox One has a huge Xbox 360 catalogue already available to play on the newer console, automatically adding your existing digital purchases to your library as soon as they’re available, including any DLC you own. Or you can use your discs, too. The PS4’s equivalent isn’t quite as sophisticated, with its PlayStation Now feature only offering a streaming service for its PS3 games but it does offer a huge number of titles already. It’s easy to complain about its pricing structure, but the simple fact is that you can play many of your favourite PS3 games on your PS4 if you want. However you look at it, playing past favourites is a nice, additional (and wholly optional) bonus on these incredibly powerful consoles. But what about the future? Well, we’ve already had the release of the newer, sleeker Xbox One S with its 4K and HDR support, plus a slight increase in power; and the PS4 Pro goes a step further, offering a PC-like upgrade that sees a considerable increase in power in this new PlayStation console, designed to be a higher-tier machine with more graphical grunt. Microsoft’s Xbox Scorpio offers an even bigger jump in power for the Xbox One side, and we’re potentially seeing a very bright future ahead – a future in which players can have the option to have a mid-generation upgrade that’s more than just a slim console, and with the rapid introduction of 4K gaming, this can only be a good thing. More choice is always appreciated, and for those who crave more power, it will be available, without compromising the quality of gaming for those sticking with 1080p displays.

As much as we gamers love to have a moan about “how good things used to be”, about golden ages of gaming and the retro scene, if you sit back and really think it over, you’ll realise how good we have it now. Broken games can be fixed with patches, extra content can be made available post-launch, and video content on sites such as Twitch and YouTube allow us to see games properly before we make the decision to drop £40-50 on a new game. This is the most connected generation ever, as we can even share our own screenshots and videos directly from our consoles, and chat via our consoles to players all over the world, building communities that love to play together, either for fun or pure competition.

Hell, we’re even closer to developers thanks to the immediacy of social media, growing communities even more, which even leads to smaller games reaching a larger audience. It even helps games and consoles to improve; just look at how much the Xbox One and PS4 have improved since launch, with features being added (and removed) thanks to player feedback. These improvements have led to a better quality experience with our consoles, generally leading to happier gamers. For the most part, anyway. And why shouldn’t we be happy? We’re in a generation that has already given us Batman: Arkham Knight, The Witcher 3, Fallout 4, Forza Motorsport 6, Doom (worth it for the soundtrack alone), Inside, Gears of War 4, Rise of the Tomb Raider, Titanfall 2, the new Hitman series, Soma, Nidhogg, Bloodborne plus too many others to mention, and that’s on top of those games I mentioned earlier!

So here’s to the best times that we gamers have ever had. Here’s to a 2017 that shows promise already, with Resident Evil 7, Mass Effect: Andromeda and Red Dead Redemption 2 just the tip of the iceberg. Here’s to more Overwatch and Destiny, to more Forza Horizon 3 and Titanfall 2, to more good times ahead, both online and off.

Batman: Arkham Knight to Get 1989 Batmobile DLC Next Week