previous
Uncharted 4 said goodbye to the series with wonder, emotion, and nostalgia
random
next
I'll never be as disappointed as I was with No Man's Sky
0 comments 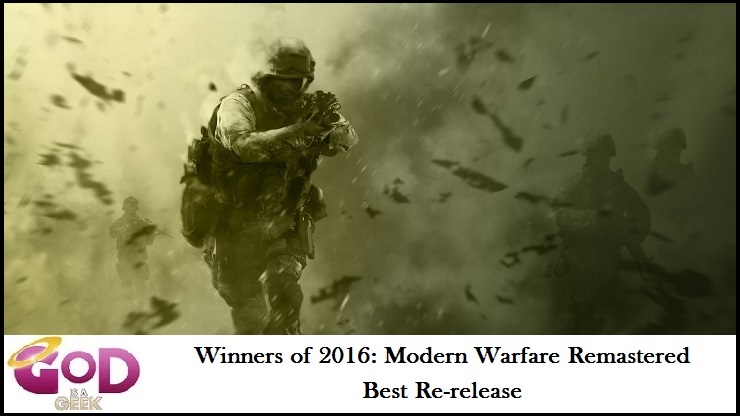 It’s no secret that I like shooting stuff, preferably in the face. After an initial shaky start I even consider myself a bit of a menace online. There are a few games where I don’t do too well (Gears of War, I am looking at you), but for the most part I can more than hold my own, and in some I’d say I was very good (Titanfall, I am looking at you). Modern Warfare was an incredible game and has a special place in my heart as one of the games (alongside Gears of War) that got me hooked back into gaming and introduced the fun that could be had in multiplayer. I have fond memories of being totally shit at the online element, but the speed of the play and the quick fire nature of the matches kept me hooked for many, many hours. It was the campaign though that I firmly remember. I played it through on Normal and was blown away by the structure of the campaign and the story that it had to tell. After finishing it, I immediately replayed on Veteran and even now memories of particular levels and the crushing difficulty of endless re-spawning enemies and grenade spam still stick in my mind.

The final part of One Shot, One Kill where you, as a young Captain Price, have to protect your beleaguered Captain MacMillan while waves and waves of enemies come at you as the timer ticks down, is a particular highlight (and nightmare). Straight after that, the level Heat – now back in the modern day, is a relentless descent back down a hill to the extraction zone, all while indefatigable streams of enemies come at you with laser focus shots and endless grenade tosses. Modern Warfare on Veteran was more an exercise in patience and persistence than it was skill and I should know because I completed it and back when I wasn’t that great at shooters. Every checkpoint was a triumph and when I finally finished it, I was elated. The remaster of Modern Warfare had a lot to live up to. Like the original Doom which defined the  genre, Modern Warfare firmly cemented it into the stream of public consciousness, and demonstrated just how far modern gaming had come, and the biggest games could become blockbusters like movies, making millions of dollars year after year. When the remaster was released, I reviewed it and praised it as an excellent remaster that fully understood the legacy that the original created. I was particularly impressed with the little extra details Raven Software had added to flesh out certain areas such as the training section at the beginning of the game. Lighting and graphical upgrades added more depth and clarity to beloved segments, and overall it was a real treat to play it again.

Since then I have had opportunity to play the multiplayer element of the remaster and by doing so it has helped me to finally pinpoint my feelings on Call of Duty as a franchise. For me, the remaster of Modern Warfare feels very much like a swan song for the series. Playing the campaign I felt like the ghost of nostalgia was just outside of my reach, I enjoyed playing it again, but those feelings I had playing the original couldn’t quite be replicated. The same could be said of the multiplayer: what was once a pioneering formula feels out dated and and inadequate in the face of some truly outstanding innovation and re-invention from the genre this year, with titles like Overwatch, Titanfall 2 and Doom. To take Titanfall 2 as an example, it was developed by a significant amount of the original team that designed and developed Modern Warfare (a not insignificant fact) and, disregarding the movement style, the online element is some of the tightest and most exciting gunplay I’ve experienced in some time. In contrast, Call of Duty now feels sluggish and slow. Issues that have become increasingly more commonplace since the map design has become smaller and smaller (due in part to the community’s desire to get back to shooting as quickly as possible) means that poor spawns are inevitable and without any discernible update to it’s engine in a number of years, its hit detection feels sloppy and out of line.

Add to that the insidious creep of loot crates that add additional weapons and cosmetic items that weren’t in the original game, and you have a multiplayer experience that is cruising on its deserved reputation without doing anything unique or special.

Modern Warfare Remastered fully deserves its place in our GOTY list as best remaster, because it is a very good remaster of an outstanding game. However, for me, it is likely the last time I will play a Call of Duty game for a while, unless there are some fundamental changes made to the way the multiplayer element of the game is handled. Personally, it feels fitting for me that the Modern Warfare campaign is the top and tail of my Call of Duty experience.

Likes to shoot stuff and wear pretty shoes. Is a BEAST at Titanfall.
MORE LIKE THIS
call of duty: modern warfare remasteredgoty 2016