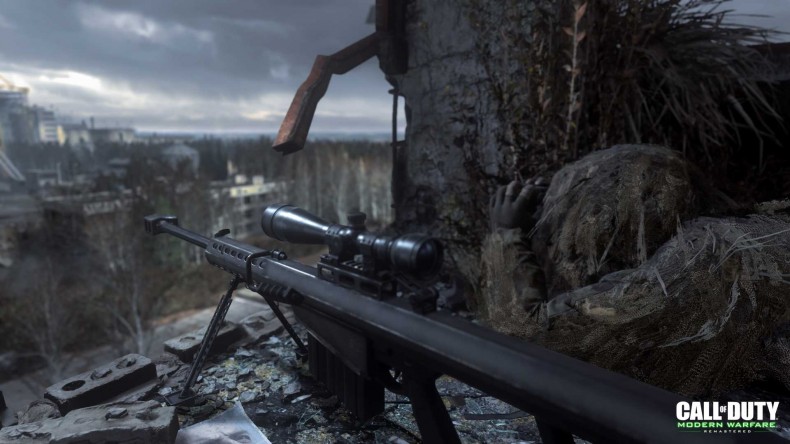 Nostalgia is a hell of drug. That yearning for the halcyon days of endless summers and penny sweets that actually cost a penny is often so strong that you forget that not everything in the past was perfect. It’s that sense of longing, that hearkening back to the time when things just worked or were made better that we tap into whenever we hear an announcement that a beloved game or franchise is going to be resurrected, either through a remake or a remaster. With the announcement that the latest annualised Call of Duty by Infinity Ward would ship with a remastered version of Call of Duty 4: Modern Warfare (for those individuals who purchased the Legacy Edition) my heart soared a little bit, but it was also tinged with a touch of wariness because things from the past don’t always live up to the huge reputation we place on them.

And what a reputation it is. Modern Warfare is the Call of Duty game, the one that launched all the endless clones of what are now referred to as dreary, brown-coloured militaristic shooters. The cinematic storytelling, the huge set pieces and of course the incredibly successful and deeply layered multiplayer that every first person shooter game since 2007 has desperately tried to recreate. The original was a huge event game; lightening in a bottle with a formula that even the mainstay of developers within the Call of Duty development cycle have rarely managed to replicate. The remaster is currently available as a thirty day early access for PS4 players who have pre-ordered the Legacy Edition of Call of Duty: Infinite Warfare. At present only the single player campaign is available, with the multiplayer and Infinite Warfare currently locked until the scheduled release date inearly November.

Raven Software is the developer that has been tasked with bringing the remaster to life and it has done an incredible job. This isn’t a case of merely up-scaled graphics for the new generation of consoles; this is a full remaster complete with new lighting and particle effects as well as additional detail that help make the environments feel richer and more alive.

The changes are evident right from the start in FNG, the tutorial level that teaches you how to play and ultimately, after the infamous cargo ship mock up, dictates the recommended difficulty level that you should start on. In the shooting range there are more textures and features including additional NPCs wandering around and practising their shooting in one of the booths. There are also smaller cut-scene changes that serve to add more detail and make it feel more alive. There is even an entirely optional training section off to the side as you go to meet Captain Price where you learn how to throw grenades that didn’t feature in the original game. You may not notice many of them if you’re not familiar with the original, but the addition of these little extras shows that the remaster has been treated with a firm understanding of just what this game achieved and what more recent first person shooters owe to its existence. The campaign is as strong as ever, paced just right and consistently interesting and exciting, though it’s a lot shorter than I remember. I played on Hardcore and with exception of the notoriously tough ‘No Fighting in the War Room’ section towards the end I breezed through the campaign in around seven or eight hours. Not that the length detracts from the quality of the campaign; it’s just one of those examples where the memory of a thing doesn’t tally with the reality of it. Once the campaign has been completed, and providing you have found the collectible items hidden around the various chapters, you can enable cheats which change the game in different ways. There are also score leaderboards for speeds runs and other challenges available.

Having played every Call of Duty iteration since the original Modern Warfare it is interesting to see how the franchise has changed over time. Firstly, more modern Call of Duty games are much faster. In the remaster, you feel noticeably slower and more cumbersome and your AI partners tend to get in the way through doorways, or take up valuable cover in a fire fight. There are also some obvious elements of the game design that stand out as being bad ideas that later versions have gotten rid of entirely, these being grenade spamming as a means of ramping up the difficulty and the problem of infinitely re-spawning enemies. I had forgotten just how tedious the never-ending enemy could be and how the game forces you to advance into their fire in order to de-spawn them and meet the next checkpoint. On lower difficulties it is ridiculous and on harder difficulties it is an exercise in frustration and patience in equal measure. Playing through the campaign there were one or two key moments where I stood and took in what was happening, and got just a hint of what it felt like to play this campaign for the first time. One such moment was in the chapter ‘War Pig’ where you are tasked with locating and protecting an armoured tank. As I arrived into the area where the vehicle was and started firing at the enemies swarming the battlefield, the music started up. That background soundtrack combined with the sound design for all the explosions and gunfire gave me goosebumps and I had a real sense of “they don’t make them like this anymore”. It didn’t have quite the same impact that it did when I played it originally, but the tease of that feeling from that one moment was more than enough to bring a smile to my face. And I think that is what defines this remaster. It is essentially a ghost of the game I played and loved nine years ago, it delivers everything you remember from that campaign because it is that campaign with a newer, shinier skin and while it is an utter treat to play it again after all these years, sadly you’ll never quite be able to grasp and hold on to that sense of shock and awe from the first.

Modern Warfare Remastered is an incredible boxed extra for Infinite Warfare. The attention to detail and the care given to this remaster is evident and no less than the game deserves. Fans of the original should be pleased to find that not much has changed, but it’s the new players I envy the most because it will be those who get to experience the moments that made this shooter stand out and spawn a myriad of pale imitations.

We’ll update our review and score nearer the release date if necessary.

They don't make them like this anymore. Modern Warfare Remastered has received the treatment it deserves and is an incredible boxed extra for Infinite Warfare

You may also like
Call of Dutycall of duty: modern warfare remasteredPC