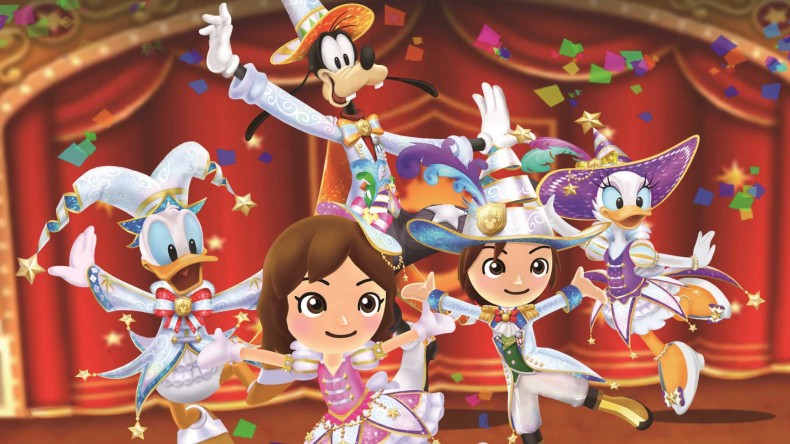 The arrival of Magical World 2’s review code came at possibly the most opportune moment for me. You see, I’ve been playing the game while at Disney World; yes, THE Disney World. In Florida, where the weather isn’t bloody awful and people are considerably nicer. While it’s not based directly upon the Magic Kingdom itself, the fact that I’ve been playing this while sitting in a Little Mermaid-themed room, complete with a gigantic Ursula statue outside my door (as in, over four storeys high), can only help me appreciate what Magical World 2 is trying to do.

And it’s trying to be more than what your typical “Life Sim” usually aspires – with Disney character. Yes, there are lots of Animal Crossing-like elements of making your own way in a virtual world, but there’s also some light action-RPG segments to break up daily life in this rough approximation of the Magic Kingdom. You are brought into this virtual world, one filled with both human avatars and actual Disney characters, and are given carte blanche to live the Disney life in any way you choose, and oh boy, there’s a lot of different ways to live that life, through a wide variety of activities. Of course, that Disney magic is the main draw here, especially when it comes to the excellent use of the company’s most recognisable characters, to whom you are gradually introduced as you spend more time in this familiar world. Yes, of course this is a game aimed at younger players, but if you’re the sort to have fond, nostalgic memories of Disney, then it’s always a pleasure to run into your favourite characters. Even I got giddy when running into Scrooge McDuck, in a rare appearance. In addition to your town, you’ll also unlock several worlds based on popular franchises, old and new – and younger Disney fans will be pleased to hear of the addition of a Frozen world, complete with Anna, Elsa, and of course, Olaf.

But when you’re not chatting to Stitch, or buying things from Huey, Dewey and Louie, you have a life to lead. There’s a pretty big emphasis on crafting – picking up raw materials through exploration of the hub world, individual quests and the occasional mini-game, and you’ll be using these materials to craft everything from the clothes you wear to the furniture in your house. Being stylish and coordinating your threads only helps to impress people more, and walking past citizens with a matching outfit will get you “Nice” points, which unlock a few bonuses. Early on, you’ll even end up as the proprietor of the local cafe, creating new recipes and even theming them in the hope of starting a party, complete with a special guest!

With this sort of game, it’s easy to be overwhelmed with things to do, but Magical World 2 implements a wonderful mechanic of unlockable stickers. Part achievement, part tutorial, part rough guide of what to do next, it helps keep a balance between the freedom of a life sim, while also offering a more linear path for those who prefer it (although the tutorial side of the mechanic does tend to drag on a little longer than needed). Different types of badge are available, relating to progress in different activities, as well as for the game’s Episodes. In a similar fashion to say, Super Mario 64, you’ll need a certain number of stickers to unlock parts of the game, but there are so many ways to earn stickers that it’s really not a problem, and there’s a lot of variety in terms of what you can do to progress further.

Outside of being a good citizen, interacting with the community around you, doing them favours and providing various services, a major part of Magical World 2 are the Episodes. As mentioned previously, you’ll unlock various worlds based on Disney franchises, and in these areas there’ll be an Episode Board, offering up various small tasks – mainly taking place in a basic action RPG/dungeon crawler, complete with enemies to defeat and more crafting items to find. They’re all incredibly basic, but are welcome diversions from the usual Life Sim grind. There’s even a few rhythm mini-games in there as well. If you haven’t realised yet, there is a lot of content here. There’s hours upon hours of game to play, as much as any Animal Crossing release, and the fact that Disney characters are added to the mix makes it a much more engaging game than you’d realise. At its heart, this is a game for the young ’uns, but even I found more than enough enjoyment, mainly because it feels authentically Disney. It’s fun to meet these characters and interact with them in this way. It’s a game that’s incredibly easy to pick up, and while certain aspects do drag on (such as a few cutscenes that linger a little too long), it’s free of the time limited nature of other games in the genre. There’s no need to play every day, turn the game on at different times, or make it a part of a daily routine – it’s uncomplicated and forgiving, and that’s always a good thing for a game with so much to do. I wouldn’t say this is a particularly deep experience, but there are enough hooks to keep you involved.

Presentation-wise, the visuals are all on-brand with what you’d expect from the House of Mouse. Everything looks like it should, so everything is bright and colourful as you would expect. However, it’s not a terribly optimised title, with noticeably inconsistent framerates, married with a ton of short, but irritating load times for everything and it does take you out of everything that’s going on.

It’s going to be easy to chalk this up as a game for kids, but that would be incredibly unfair to Magical World 2. It ticks all the boxes of what a Life Sim should be, and there’s something here for all fans of the genre, but especially if you are a fan of all things Disney. Above all, it’s a truly magical alternative to Animal Crossing.

Noticeable framerate drops and loading screens
A little repetitive after a while
Will be too “hand-holdy” for most players.

It’s Animal Crossing, with Disney characters, action sequences and a better-defined “goal” . What’s not to like about that?