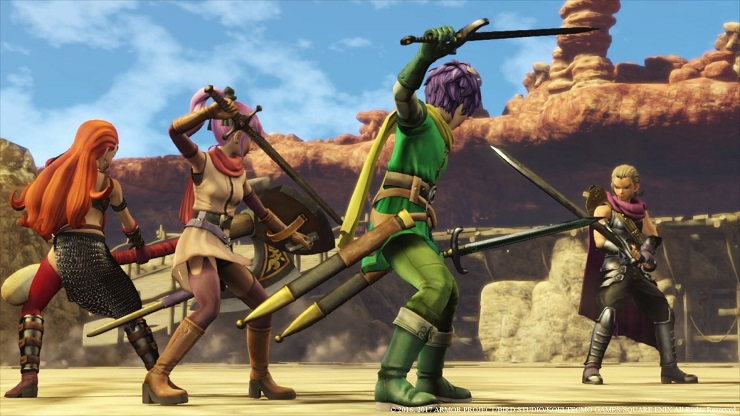 You’ve probably already heard of Dragon Quest Heroes II, seeing as it released in Japan back in May 2016. However, almost a year later, fans will be excited to know that it will finally be releasing in the west and after playing a couple of hours of it, I’m confident that fans won’t be disappointed.

DQH II quickly introduces its dual protagonists (and cousins) Lazarel and Teresa, along with their trusty ‘partner-in-slime’, Healix. During a friendly duel with the other protagonist, players will have the opportunity to learn the basics of the combat system, before being thrust into a battle with a few waves of familiar Dragon Quest enemies and a hefty monster. It turns out that Lazarel and Teresa are both skilled with a sword and soon prove themselves to be useful when monsters come knocking at Harba’s gates. So, after a quick chat with the King and acquiring another member into their party, the heroes set off to begin their adventure. One thing that I already respect about DQH II is that it doesn’t hesitate when establishing its story. From the opening scene, players are thrown straight into the action and will get a good idea of whether or not they will enjoy this hack and slash action RPG. Over the first hour or so, the game retained a good pace with a great balance of story and action. There are always plenty of enemies hanging around in the stretches between each destination, ensuring that traversing the world doesn’t feel boring. In addition, the characters have such a strong personality that the exchanges between them don’t feel tedious to sit through. I’m usually really impatient when I have to listen to elongated periods of dialogue, but I didn’t mind sitting back and listening to the terribly silly puns that the writers have managed to cram into the game. The voice acting also adds another dimension of humour that I’m sure many people will enjoy. It’s so bad that it’s good!

Furthermore, despite having a reasonably straightforward combat system, the game does an excellent job of employing a number of different mechanics that keep combat feeling reasonably fresh. Having not played the first Dragon Quest Heroes game, I was surprised to see how many options I had when attacking enemies, and how easy it was to coordinate an attack on one of the larger monsters using the four characters that were in my party. In the tutorial, players are encouraged to string basic attacks together by inputting at least four attacks to achieve a decent combo and deal a significant chunk of damage. Players can also make use of each of the character’s special abilities, with Lazarel’s focusing on ice and Teresa’s focused on fire. You’ll accumulate more characters in your party as you progress and from what I’ve seen so far, these also have their own unique style of combat. In the midst of a fight, players will find that their mana bar regenerates pretty rapidly, enabling them to throw out their special attacks in quick succession. Switching characters is as easy as a single squeeze on the left trigger (of the controller), so if you’re somewhat coordinated, these fights should make you feel like an overpowered boss, most of the time. After each battle each character will earn skill points which players will be able to spend on various upgrades, from increased health and strength to increasing the effects of spells.

At a glance, you may be thinking that this hack and slash is just an easy, super casual game that lacks the requirement of skill and omits any form of challenge. I drew this conclusion quite early on in my playthrough too, but I’m happy to report that it does become a bit more challenging later on. After playing through some of the story on my own, I jumped into a cooperative Dungeon, known as ‘The Space-Time Labyrinth’. This mode supports up to four players and facilitates multiple waves of small enemies before introducing larger monsters. This mode has a strong emphasis on communication and teamwork as it’ll require the powers of your entire team to take down the monsters. If you’re not willing to coordinate, you’ll soon find yourself sprawled out on the floor waiting for a teammate to come and revive you. You may be able to send out little calls for help, or cheer on your team while you’re down – which is a nice little addition, but it’s still boring as hell to watch other people dash around you, so you’ll want to remain healthy and alert in these battles. Players will also be able to play cooperatively in ‘Story Battles’ where player two essentially replaces player one’s party members. Unfortunately, I didn’t have the chance to test out this mode, but it’s always nice to play with a friend and the fact that player two replaces the party members would probably make the combat even more enjoyable. You’ll have to get to the first city before you can unlock this option though.

DQH II ran quite well on the PS4 at 60FPS with noticeable drops when I was attacking enemies, so if you’re concerned about performance, you’ll probably want to pick up either this version or the PC one. Not only does the game’s artwork look really cute, the models look incredibly polished and this is exhibited perfectly on the PS4. However, when playing it, I couldn’t help but think about how this game would feel on the Nintendo Switch. I tried the demo available on the Japanese eShop to compare how the game performs and there was no contest, really. Seeing DQH II running at 60FPS on the PS4 and then 20-30FPS on the Switch makes me feel as though I was spoilt by playing it on the PS4 first. It’s a shame that the game doesn’t run as well on the Switch as playing it in handheld mode just feels right with regards to the controls and casual nature of the game. I think a lot of the charm in DQH II comes from how nice it looks (and runs) and the Switch just doesn’t quite cut it with this one. Dragon Quest Heroes II looks really cute and has the upbeat, cheesy kind of feel that you’d expect. My experience with the game has confirmed that it’s probably a title that I’d want to play quite casually, but I’m sure many other players would enjoy being more committed to it and would certainly reap the rewards for doing so. So far, the story feels varied enough to keep players interested, yet it won’t leave players feeling lost or unsure what to do. The difficulty of the mobs increases at a steady pace and as I said before, the constant stream of silly humour will definitely keep players in a good mood. It will be interesting to see what Dragon Quest fans make of it, when it releases in Europe at the end of April.