previous
GOG.com will give you INSIDE free if you buy Little Nightmares from them
random
next
Dead Cells hits Steam Early Access on May 10
0 comments

Paladins may look and feel very familiar, but there is definitely fun to be had 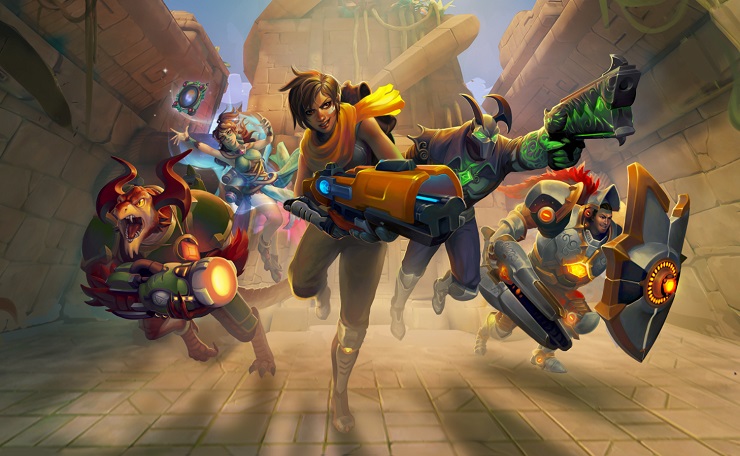 I’ve been playing a fair amount of Paladins over the Easter weekend and will admit to being initially a little lukewarm on it. Coming fresh off the back of a couple of days in Bruges sampling the local, and frankly excellent, hoppy local produce I couldn’t really be arsed to try it out, wanting instead to dedicate my free time to the Overwatch event, but I had a Beta code so I thought I would at least give it a couple of hours.

From the very beginning it is clearly trying to emulate Overwatch; there are a variety of heroes, errr I mean Champions, that perform specific functions like Support, Front Line, Attack and Flank. However, unlike Blizzard’s runaway success, Paladins is utilising a free to play model and as such a lot of the characters are initially locked behind a paywall. Other differences include the inability to swap out Champions mid match as well as some on the fly character buffs that adds a dynamic element to matches and a loadout system achieved through a card based system. I’ve only played the Siege mode where matches are objective based with each team pushing towards the middle where they will need to hold a point for a period of time. Teams that hold the point longer will then spawn a payload (they are not even hiding it!) and will then need to push it to the enemy base. The first team to score four points in the match will win. Points are awarded for successfully spawning the payload, pushing it to the enemy base, or defending an enemy payload and stopping it from reaching your base.

Much of the content is behind the paywall initially. You can purchase a pack for £15 that will unlock all Champions for you immediately, otherwise you will have to save up 5000 gold (the in-game currency) to purchase one new hero. You earn gold at the end of each match, with the amounts varying wildly between 100 to 600 gold depending on whether you won the match, how much damage you do, whether you performed your class function well and if you were in a party or not. There are various boosts you can buy to increase your gold production, but if you don’t want to do that prepare for the long grind. Once you hit level seven there are a few weekly quests you can perform; things like win three matches, play two matches as a flank character etc. which upon successful completion will also give you some gold and there is a daily login bonus of gold also that increases with each consecutive day of logging in.

Each character has a number of slots that you can assign a loadout to. These are achieved through a card system. You unlock cards by opening loot chests which are given each time you level up or raise the level of a Champion. If you already have the card it will be converted to essence: another currency that can be used to make the cards that you want. Cards have certain boosts; performing a kill with one of your specials will raise your health by 150 points, or performing a headshot on an enemy with your one of your skills will increase movement speed by 15% for 5 seconds. Playing around with the card set up can help create a Champion that operates in slightly different ways depending on how you play. This level of customisation adds an interesting dynamic to the Champions and goes some way to compensating for the fact that you can’t change mid game (although it should also be noted that you can’t change loadout mid game either). Further deviations in the way a character plays can be achieved throughout the match. By performing actions in game like pushing the payload you can earn credits which can be spent on buffs to things like defence and attack. You can only choose one buff from each section and that buff can be levelled three times in total. If you perform badly you won’t get as many credits to spend and will therefore not be able to boost anything. It’s evident that this is an attempt to get players to focus on the objective parts of the match like securing and pushing the payload as you earn significantly more credits for performing those actions, but in practice I’m not entirely sure it makes much difference.

There are a couple of maps available in the Beta; I am unclear if this is all the full game will have or not, but they are interesting enough with a variety of channels through to the objective point for flanking players to utilise. Visuals are bright and fun with an aesthetic very reminiscent of Fable, and the majority of the characters are chatty although lack some of the charisma of their Overwatch counterparts. There are some issues with regards to balancing that I feel need to be rectified. Having champions locked behind a paywall does generate the feeling that teams where players have invested more time (and potentially money) will have access to heroes that at first seem to be impenetrable to defeat. Also, the aim assist on console is outrageous with some characters. There is a character called Widowmaker, errrr, I mean Kinessa who has a sniper rifle that players don’t even really need to aim to be able to pull off headshots, and some of the high damage characters just need to spray bullets wildly to be able to do damage. Hopefully a lot of this will be rectified over time, and it seems that Hi-Rez are interested in hearing details on aim assit from the community at large with links to a survey on the front page once you login.

There is fun in Paladins, but I will admit to being astonished at the similarities with Overwatch. There is a dwarf character called Barik whose character model is almost identical to Blizzard’s Torbjorn; he even builds a deployable turret, similarly there is a character with a huge shield that can be utlised for pushing the objective and a rocket wielding creature that can boost up into the air and float about raining rockets on enemies. I understand that developers Hi-Rez have said that they have taken inspiration from a number of games that pre-date Overwatch, but there is plenty in Paladins to raise eyebrows. Regardless, it is a fun game. It is nowhere near as polished as Overwatch, nor does it appear to have the variety that has, but there is something there and it will be interesting to see how the free-to-play model pans out over the coming months.

Likes to shoot stuff and wear pretty shoes. Is a BEAST at Titanfall.
MORE LIKE THIS
Paladins