previous
Here are some of the gaming figures at Wonder Festival 2017 in Japan
random
next
Hello Neighbor is a weird, baffling concoction of stealth and survival in a moustached weirdo's home
0 comments 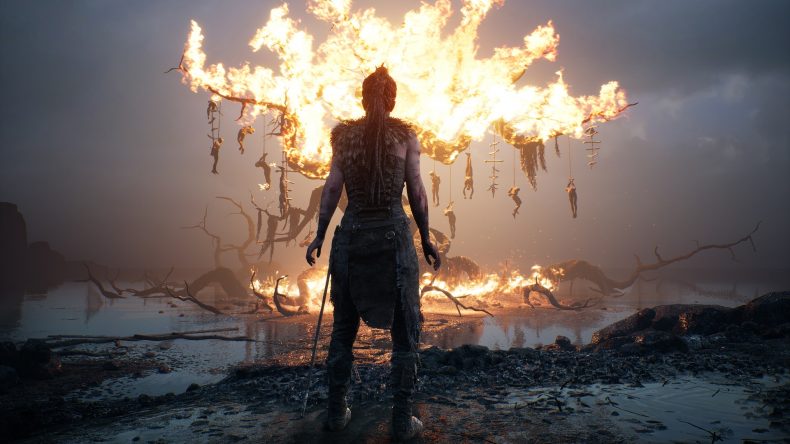 Ninja Theory are behind some genuinely fantastic games, such as Heavenly Sword, Enslaved: Odyssey to the West, and DmC: Devil May Cry, but with Hellblade: Senua’s Sacrifice, the studio had the chance to make something that belonged to them – giving them creative freedom to build something unique and fresh. I had the pleasure of talking to Tameem Antoniades, Ninja Theory’s Chief Creative Director about the game’s development, including how a research into psychosis helped to shape Hellblade, the game’s leading actor, sybolism and how that plays a role, and more.

After watching the gameplay demo, I wondered how much of a role the voices in Senua’s head affecting things, and why Ninja Theory chose this for Hellblade. “It’s a very common attribute in psychosis – the phenomenon of voice hearing. We talked to a lot of people who had been recovering from severe mental illness, or don’t consider themselves to have a mental illness, but stil hear voices, which was a bit of a revelation to me. So we talked to them about what they hear, how it presents itself, what are the voices like, how many voices, where do they come from. We worked with these guys for two years – working out what they hear. Once we did that, we commited to putting it in the game.” But were the voices there to help your progress at all, or were they they for other reasons? I asked Tameem to explain a bit more about them. “They are there all the time. They’re not just there for gameplay, they’re there as noise – they talk about what Senua’s thinking all the time, so you get some story. They give you clues, they bring your attention to things, but they can also misdirect you and put doubt in your mind. In combat they become aware of whats going on, like you intuition – your inner voice. They’ll warn you if enemies surround you, becoming your tactical voice.”

The game sounds really cool, and the way the voices in Senua’s head play a role seem to be an important feature. After touching on how they help in combat, I wanted to know a bit about how the focused combat (or bullet time for all you Max Payne fans out there) works in Hellblade. “It’s something you acquire, then you build it up via fighting well, including evades and defending yourself. You build it up then trigger it, and during that time you’re quicker and do more damage. The more damage you do the longer it lasts.”

There appeared to be no HUD in the gameplay demo, but was it just absent for the same of the demo, or was it not going to feature at all? “Theres no HUD or tutorial in the game. We had more on screen prompts in development, but we just took them out. We found if you took it all away then people tend to focus on the screen, on the action, on sound, and on whats actually presented, rather than the arbitrary HUD elements in most games.” Ninja Theory are using some pretty fantastic motion capture technology, including their real time capture equipment, so I was keen to know a little more about it. “The real time capture stuff came quite late in the game. There’s only a couple of scenes in the game that use this technology, but it’s something more useful for future games. It allows you to see a character in the world of Hellblade that allows you to frame the shots. You can see the burning tree, and you can see the mountains. If you’re playing the scene with Senua’s alter ego, you frame both Senuas. The real time stuff is pretty amazing for directing on set. It’s pretty groundbreaking – not even Avatar or Star Wars has this technology.”

“I think the motion capture stuff is the best we’ve done. Although it’s homebrew, its totally cutting edge, and what the player gets from that is – you know, every effort in this game has been dome independenty with a limited budget and limited people. We can release a game thats smaller than AAA, but saying that, it’s still 8 hours.”

Having an independent AAA team to work on Hellblade is great for Ninja Theory, and it’s clear how passionately they are embracing this ethos as a company, and why it’s so important. “It gives us more creative freedom so we dont have to answer to anyone. We can build the game we want to – we can build it our own way. We don’t own Enslaved, we dont own Heavenly Sword even though we made them, but we own Hellblade, so that was the drive. We want to make something we own. We want to cut out the middle man and sell directly to the people that matter to us – the players and fans. If we can limit our budget and stay focuses we can make a game that’s super high quality and sell it for a price you frankly wouldn’t be able to do if you were going through retail. The reason it’s £25 pounds and $30 is because we’re super focused and we’ve cut out the middle man, so it’s us and the players, and nothing in between.” Melina Juergens seems like a fantastic choice to play Senua, and it was really interesting to find out about how Tameem chose her for the Hellblade. “Melina joined us on DmC. She’s an old friend, which is weird saying because she’s not very old at all. She’s a photographer and had an eye for editing. She started doing trailers for us on DmC and then doing the Dead Diaries on Hellblade. She was outstanding on our motion capture tests which we were doing for over three years and was really good at it – she was just a natural. Melina’s not a professional actress, but I knew I could direct her. She listens and she’s a fast learner. She’s a natural comedian in the office and I think a comedian is a natural actor. She did a really great job. For most of the scenes she’s on her own and I knew she could take direction. She’s blessed with great looks and she looks good in the game. She’s quite petite which wasn’t exactly what I was after when I started the game, but I kind of like that she is, because it sort of sends a message, that strength doesn’t come from being pumped up with testosterone. It comes from persistence, and being adaptable and using your mind.”

There seems to be a lot of symbolism in the game, so my final question was about important it is in Hellblade. “There’s a lot of exploration and puzzle solving based around illusion and perception. so that aspect of finding runes is part of it – one part of 7 different ways in which you progress through the world. You get told 7 different runes protect the path to hell so you’re looking for symbols everywhere. It sort of relates to some of the conversations we were having with people who experienced psychosis where they talk about everyday objects having meaning to them and solving puzzles in everyday life, so we want to get you into that mode of actually seeing patterns and solving them.”

Hellblade: Senua’s Sacrifice is coming to PlayStation 4 and PC on August 8, 2017.

Video games are cool. Don't let anybody tell you any different.
MORE LIKE THIS
hellblade: senua's sacrificeNinja Theory