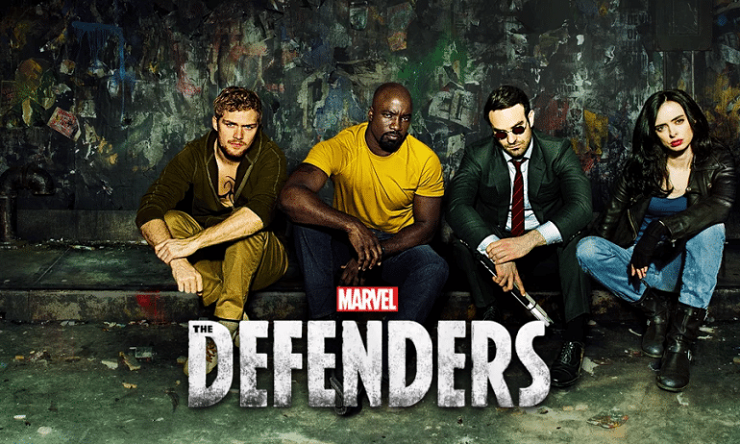 All things considered, Netflix has done a pretty good job with Marvel’s street level heroes so far. There have been a couple of low points (the first few episodes of Luke Cage, for example, or most of Iron Fist), but on the whole they’ve managed to thrill us with existential internal conflict, quippy dialogue, and lots and lots of people getting punched.

Since the first season of Daredevil, we’ve been building steadily towards the best superhero mash-up since the Avengers (sorry, Bats-vee-Supes, I’m just not feeling it). But here’s the thing: we’ve all been so fixated on what’s coming up, we haven’t noticed the gradient of the road slowly dropping. It hasn’t been a tumble downhill, but a subtle decline too gentle for us to really see, and only as the credits rolled on episode 8 of The Defenders did I notice it had been happening. I mean, there’s lots of good here, but it’s almost all for the fans. If you missed any of the introductory series, you’ll be confused by many references and conversation points, and you’ll probably wonder why they don’t just seal Danny Rand in an oil drum and throw him in the Hudson.

Without spoilers, the plot is the culmination (sort of) of the Defenders’ individual battles with The Hand, the criminal organisation that runs the streets like the League of Shadows, manoeuvring a multitude of malicious plans into action through their various nefarious fronts and schemes. As an evil empire they’ve got it all: sinister laughs, unlikely names, vague, poorly-defined powers (seriously, one of them is basically a Sith Lord for some reason), and short-sighted plans that don’t simply involve catching the good guys and shooting them or drowning them.

Sadly, it’s The Hand that lets The Defenders down for me. Their silly bickering and constant, constant posturing reminded me of Arrow at its worst, while the sound chemistry between the four leads is often hamstrung by the writers’ desire to have them squabble like schoolkids for comedic (or plot-stretching) effect. Not one of them can suggest an idea, no matter how wise, without at least one of the others shooting it down, often to simply agree with it in the next scene anyway. That said, some of it works very well. Charlie Cox turns in a fantastically broody performance as usual, ensuring that he remains the primary focus of every scene he’s in, overshadowed only occasionally by Kristin Ritter’s embattled alcoholic PI, Jessica Jones. Their scenes together feel the most natural, partly because their characters are darker and arguably more interesting than the others, partly because they’re simply better performers.

Mike Colter delivers a reliable Luke Cage, but he isn’t given much time to make decisions or influence goings on because he’s such a passive character – y’know, for a 6-4 giant with bulletproof skin. As for Finn Jones… Look, I didn’t hate Iron Fist. Some of it was great. Sadly, most of the great was due to a wonderfully hammy David Wenham and awesome support from Jessica Hemwick and Rosario Dawson. Jones does what he’s able, and for the few moments that the script allows him to smile, joke, and play off the other mains, he’s genuinely likable. Unfortunately, he spends the majority of his screentime whining, screwing up his face like a tantrumming teen and reminding everyone he’s the Immortal Iron Fist before getting bitch-slapped again.

In the end, The Defenders’ greatest enemy is its run time. Depending on your standpoint, it’s either too long a series forced to rely on rinse-repeat fight scenes, or it’s too short a series, failing to do true justice to its heroes or its villains. The plot is coherent enough, but there’s not a single twist you won’t see coming, and the villains simply aren’t threatening. Sigourney Weaver is fantastic as always, and Wai Ching Ho chews the scenery as Madame Gao, but the heroes are so powerful that the writers struggle to make the villains feel like a legitimate problem. They’re more of a hindrance than anything, especially as their goal is so vague. Also, as usual, you can’t help but wonder why the Avengers haven’t gotten wind of the Hand yet. By the final two episodes the tension is all but gone (as are the two most interesting supporting characters), the non-super sidekicks are just as capable as the main four, and I was actually starting to get bored of the same old fights, the same old moves, the same old same old. I think the biggest issue is that the Defenders never feel like a team, more a group of strangers in a perpetual, overly-choreographed barfight.

Yet, if all this sounds damning, allow me to offer some levity: it’s still fun. Despite all the efforts to make it seem dark and edgy, the series, and by extension the mini universe it exists in, has dropped to the level of Arrow and The Flash, which sounds unfair to the CW but isn’t intended as an insult. It’s simply that with Daredevil 1&2 and Jessica Jones, Netflix’ universe started incredibly strong, and now it’s just another silly superhero series. Luke Cage held its own despite swapping a great villain for a painfully OTT one halfway through, and Iron Fist… was also a thing that happened.

Sadly, The Defenders feels burned out before it even gets going, and the routine is so familiar at this point that it struggles to reach and maintain any kind of real impetus. Roll on The Punisher and Jessica Jones 2. There’s still time to pick this back up.

Senior Content Editor Mick has been playing games for over 30 years and writing about them for around 12. After drifting from site to site for a while, settling briefly at the now-defunct Made2Game and freelancing for the gone-but-not-forgotten NintendoGamer Magazine, he came at last to rest at Godisageek. Mick has been a reviewer, staff writer and content editor here for some time, while also moonlighting a little for Red Bull Games. He has 4 kids, has written 2 novels, and sometimes even manages to pay a bill or two. You'll usually find him defending the galaxy in Destiny 2, battling evil in Diablo 3, or lurking in the background on Twitter. Find him there @Jedi_Beats_Tank, or on XBL (JediWaster247), PSN (Jedi_Waster) or Nintendo (JediWaster).
MORE LIKE THIS
Daredevil